U.S. Orders China to Close Its Houston Consulate in 72 Hours 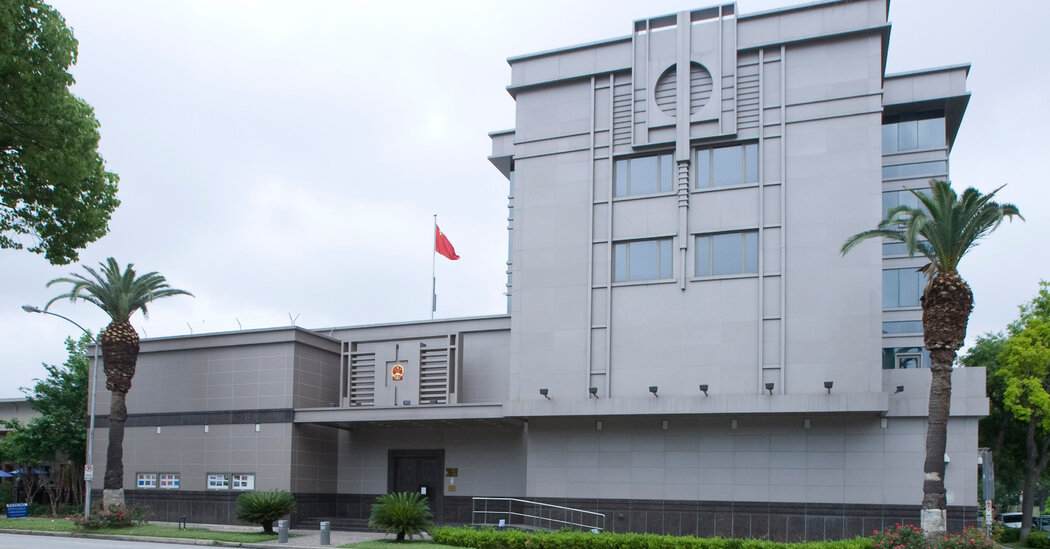 The United States ordered China to close its diplomatic consulate in Houston within 72 hours, dealing another blow to the rapidly deteriorating relations between the two countries. China promptly vowed to retaliate, calling the move illegal.

The State Department said the closure was made in response to repeated Chinese violations of American sovereignty, including â€œmassive illegal spying and influence operations.â€

The Trump administrationâ€™s decision, an unusual and grave step, was a significant escalation of its effort to tighten the reins on Chinese diplomats, journalists, scholars and others in the United States. It comes amid rising tensions that were inflamed by the coronavirus pandemic but that now touch on virtually all aspects of the relationship.

The restrictions have included issuing Cold War-like travel rules for diplomats and requiring several Chinese state news organizations to register as diplomatic entities. The administration is also considering a travel ban for members of the Communist Party and their families. Such a move, if enacted, could affect 270 million people, and it has been widely criticized as too sweeping to be practical.

The State Department spokeswoman, Morgan Ortagus, said the order to close the consulate showed that the United States would not tolerate Chinaâ€™s â€œegregious behavior.â€

â€œThe Peopleâ€™s Republic of China has engaged for years in massive illegal spying and influence operations throughout the United States against U.S. government officials and American citizens,â€ Ms. Ortagus said in a pointed and politically tinged statement.

The move, she said, would â€œprotect American intellectual property and Americansâ€™ private information.â€

She did not elaborate, but the administration has repeatedly accused China of various attempts to steal commercial and military secrets, allegations that Beijing has rejected. The Justice Department said on Tuesday that an indictment had been secured against two Chinese hackers whom officials have accused of trying to steal information about coronavirus vaccine research.

Wang Wenbin, a spokesman for the Chinese Ministry of Foreign Affairs, urged the United States to reverse the decision immediately. â€œOtherwise China will certainly make legitimate and necessary reactions,â€ he said. His remarks suggested that China would, at a minimum, close a U.S. Consulate in China.

In the hours after the Trump administration notified the Chinese of its decision on Tuesday, smoke was seen billowing from a courtyard inside the consulate in Houston as employees dumped what appeared to be documents into flaming barrels, according to a video posted by KPRC-TV, a local television station.

The police and fire departments responded to reports of a fire but did not enter the building, over which the Chinese have sovereignty.

In Beijing, Mr. Wang called the move unprecedented and illegal under international law, and described it as the latest in a series of aggressions.

â€œFor some time, the United States government has been shifting the blame to China with stigmatization and unwarranted attacks against Chinaâ€™s social system, harassing Chinese diplomatic and consular staff in America, intimidating and interrogating Chinese students and confiscating their personal electrical devices, even detaining them without cause,â€ he said.

Cheng Xiaohe, an associate professor at the School of International Studies at Renmin University in Beijing, said the United States had never taken such a bold and divisive step since the two countries established diplomatic relations on Jan. 1, 1979.

â€œIf the relationship between China and the United States continues to deteriorate unchecked,â€ he said in a telephone interview in Beijing, â€œthe next result will be the severing of diplomatic relations.â€

Closing a consulate is a serious diplomatic matter, but it is not without precedent in times of tensions.

In 2017, the Trump administration ordered Russia to close its consulate in San Francisco, along with two annexes near New York and Washington, in retaliation for Russian restrictions on the number of American diplomats in Moscow. Those moves stemmed from the furor over Russiaâ€™s interference in the 2016 presidential election, the fallout from which is still felt, despite Mr. Trumpâ€™s attempted outreach to the Russian president, Vladimir V. Putin.

China also operates consulates in New York, Chicago, Los Angeles and San Francisco, in addition to the embassy in Washington.

The effect of the closure on relations â€” and travel â€” would in the short term be minimal compared with the diplomatic furor it has already sparked. The consulates principally process visas for travelers visiting China; the Houston consulate handled those for the southern states, from Texas to Florida. Travel between the two countries has been severely limited in any case because of the pandemic.

Hu Xijin, an editor with The Global Times, a nationalist newspaper controlled by the Communist Party, called the American move outrageous, particularly given the short notice for Chinese diplomats to clear out within 72 hours. That would mean by Friday.

â€œThis is a manifestation of panic,â€ he wrote in a note posted on Weibo, the Chinese social media platform. â€œIt seems that Washington has no bottom line.â€

The newspaper also posted a poll on Twitter â€” which is banned in China â€” asking readers to vote on which American consulate to close. On the mainland, the United States has them in Shenyang, Shanghai, Chengdu, Guangzhou and Wuhan; it also has a consulate for Hong Kong and Macau in Hong Kong.

The State Department evacuated most of its staff from the Wuhan consulate in February during the outbreak of the coronavirus pandemic â€” a move that China at the time criticized as stoking panic. It has since significantly reduced the operations at the embassy in Beijing and the other consulates, with many diplomats returning to the United States.

In recent weeks, the department has begun to slowly return diplomats and their families â€” only to face rigorous health screening and quarantine rules that the Americans had complained were onerous and even in violation of the Vienna Conventions on diplomatic and consular relations.

Ms. Ortagusâ€™s statement did not cite those restrictions, however. Instead, she echoed many of the broader political accusations Mr. Trump and his aides have leveled at the Chinese in recent months.

Officials in China have reacted to the flurry of actions taken by the administration with growing alarm, frustration and anger.

Many accused Mr. Trump of attacking China as part of his re-election campaign, while others see a deeper, longstanding American animosity toward the country spilling out into public view. Much of Chinaâ€™s fury has focused on Secretary of State Mike Pompeo, who has been one of the most outspoken critics of Chinaâ€™s behavior.

In a statement posted after a phone call with the Russian foreign minister, Sergey V. Lavrov, Mr. Wang accused anti-China hawks in the Trump administration of clinging to a Cold War mentality and even McCarthyism.

â€œThe United States nakedly pursues its own policy priorities and pushes egoism, unilateralism and bullying to the extreme,â€ Mr. Wang told Mr. Lavrov, according to the statement. â€œThis is nothing like how a major country should be.â€

Reporting and research were contributed by Claire Fu and Keith Bradsher from Beijing, and Megan Specia from London.