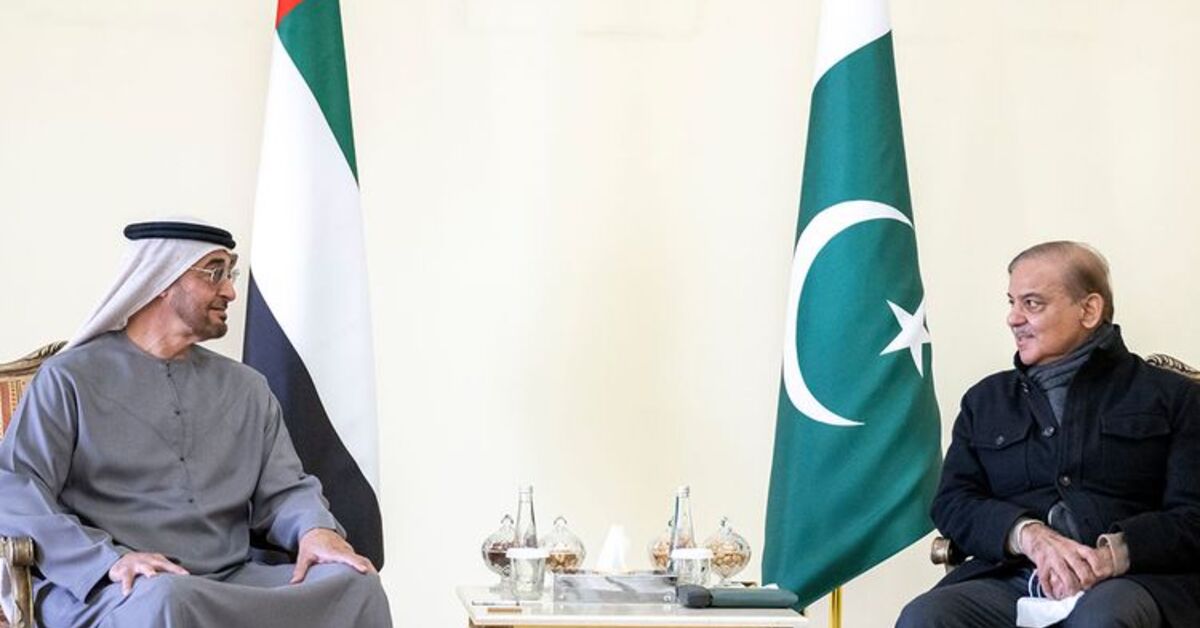 UAE President Sheikh Mohamed bin Zayed arrived in crisis-ridden Pakistan on Tuesday for a two-day visit to meet with the country’s Prime Minister Rahim Shebaz Sharif, as the country plunges into an economic mess.

The Emirati President was received by Pakistani Prime Minister Shehbaz Sharif and a number of ministers and senior officials. The visit comes two weeks after Sharif visited Abu Dhabi earlier this month in an effort to seek UAE’s help as Islamabad navigates an economic and energy crisis.

Pakistan’s economy is reportedly near collapse, with a plummeting currency, rising inflation, catastrophic flood damage estimated to have caused over $30 billion in economic losses, according to the World Bank, and drained energy import reserves that have led to regular nationwide blackouts. On Monday, a nationwide power outage in Pakistan left nearly 220 million people without electricity.

#poweroutage in Pakistan is sending the entire country into darkness. Even #Bangladesh which broke away from us is power surplus.

Where have we reached??? pic.twitter.com/jw5Rk6J3Ow

Foreign exchange reserves dropped to a critical level of $4.3 billion in January, enough for three weeks of imports, according to the country’s central bank.

The UAE agreed to lend Pakistan $1 billion on top of deferring its previous $2 billion loan during Sharif’s visit to Abu Dhabi earlier this month.

Pakistan is also facing an energy crisis. Earlier this month Pakistani authorities ordered all markets, restaurants and shopping malls to close early, as part of an emergency plan to conserve energy as the country struggled to make overdue payments on energy imports, the Washington Post reported.

Ahead of the presidential visit to Pakistan, its UAE Ambassador Faisal Niaz Tirmizi told Emirati state media that the UAE is his country’s biggest trading partner and that bilateral trade between the two countries this year is expected to grow to double its 2021-2022 volume of $10.6 billion.

With a faltering economy and exchange reserves barely able to cover a month’s worth of imports according to Reuters, Pakistan remains a key asset to the UAE.

Emily Hawthorne, a senior Middle East analyst at Texas-based Risk Assistance Network and Exchange, said the UAE is very pragmatic about maintaining its relationship with Pakistan.

“Pakistan is a critical partner with a large economy and sources of labor capital from the highest educated people running companies in the UAE to blue-collar labor that makes the economy function,” she told Al-Monitor.

According to the Emirates News Agency, about 1.6 million Pakistanis reside within the UAE’s population of over 9.3 million (as of 2021), making up more than 15% of the population that has sent $6.11 billion in remittances from 2020-2021.

“To maintain their economy, the UAE needs to secure a steady supply of labor, capital, talent and energy exports, and Pakistan is one of the main places where that comes from,” she added.

Pakistan predominantly imports 56% of its crude oil from the UAE, with 34% from Saudi Arabia and 4% from Kuwait, according to a 2021 report by the Trade Development Authority of Pakistan.

The UAE is likely to address its aid to Pakistan as more of a regulated investment during these talks, said Hawthorne, despite not making an announcement about it as Saudi Arabia did last week at the World Economic Forum in Davos.

It’s following the regional shift of not throwing money into a sieve that’s gone within a few months but that develops sustainable growth to reshape the cash-strapped country’s economy.

“They’re at the point where there is likely a lot of anxiety within Gulf capitals like Abu Dhabi and Riyadh about whether the money they continue to offer Pakistan in terms of aid and loans to the tune of billions of dollars is actually going to help,” she said.

The International Monetary Fund and Pakistan signed a $6 billion bailout in 2019 and added another $1 billion this year with the condition of meeting budgetary targets and introducing reforms, according to Reuters.

While no investment or trade agreements emerged from the first day of the presidential visit on Tuesday, UAE meetings held earlier this month with Pakistan’s ambassador hinted at promising outcomes in areas including clean energy.

“Pakistan will be working closely with the UAE, and you will see very soon the fruition of these negotiations that have already started between the two countries,” said Ambassador Tirmizi.

He also identified sectors of fintech, information technology and small businesses as key areas of the upcoming collaboration.