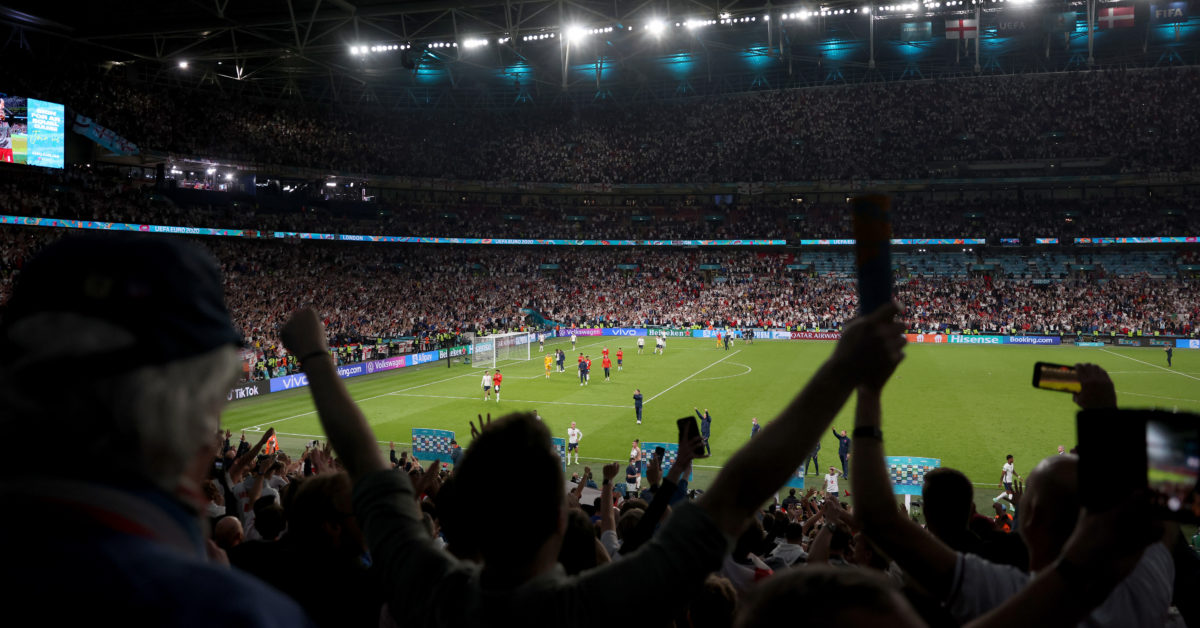 Government Chief Whip Mark Spencer, responsible for overseeing party discipline, was among those attending the England vs. Denmark semi-final match on July 7.Â

The match began shortly after a 6:59 p.m. vote in the House of Commons on the EU Settlement Scheme, in which hundreds of MPs cast proxy votes.

A dozen of those MPs â€” all from the Conservative party â€” were at Wembley for the evening, analysis by POLITICO revealed.Â

A government official said proxy votes were being used by almost all MPs at the time in order to avoid crowding in the division lobbies. Three of the MPs contacted â€” Davies, Jenkinson and Bell â€” made the same point.

Shadow Health Secretary Jon Ashworth and the Shadow Work and Pensions Secretary Jonathan Reynolds voted by proxy for a rejected measure which would have brought forward a public inquiry into the pandemic. They, along with colleagues Stephen Kinnock, Charlotte Nichols, Sharon Hodgson and Toby Perkins, enjoyed hospitality packages at Wembley a short time later.

Labour MPs contacted by POLITICO reaffirmed they were following advice from party chiefs to vote by proxy in order to reduce crowding in physical voting lobbies during the pandemic. A party official stressed Labour abstained in the later vote that evening.

A House of Commons spokesperson said: â€œWe do not comment on individuals.â€

Football fans who attend games at Wembley with a hospitality package can enter the stadium up to three hours before a match kicks off, with food and drink offered as part of the experience.Â

Of the total 18 MPs mentioned in this article, all but three attended England vs. Denmark in hospitality. Hospitality customers for this match could enter the stadium from 5 p.m., 45 minutes after the first vote held that afternoon and just under two hours before the second vote.

Eleven of the MPs attended the match on behalf of gambling company Entain, which owns several bookmakers in the U.K. Each individual ticket was worth Â£3,457.

The rules at the time stated proxy votes may be used by â€œmembers who do not wish to vote in person for medical or public health reasons related to the pandemic.â€

Proxy voting has been in the spotlight after the Daily Telegraph reported Geoffrey Cox, a Conservative MP under fire for his lucrative second job in the Caribbean, voted 243 times by proxy while abroad.

The system was set up in 2020 to allow MPs who were ill with COVID or self-isolating to take part in votes, and was later expanded for widespread use in order to reduce crowding and the risk of infection. At this time the rules were further adjusted to allow MPs who were present on the parliamentary estate to cast votes by proxy.

Throughout the pandemic the process relied on â€œself-certification,â€ meaning it was taken on good faith that MPs had a valid reason to use a proxy. The practice was discontinued at the end of July this year along with other measures for remote participation in the House of Commons.

Members including the Scottish National Partyâ€™s Amy Callaghan â€” who is recovering from a brain hemorrhage â€” have complained there is now no system in place for ill MPs to vote in parliament. The use of proxies is currently under review by the Commons procedure committee.