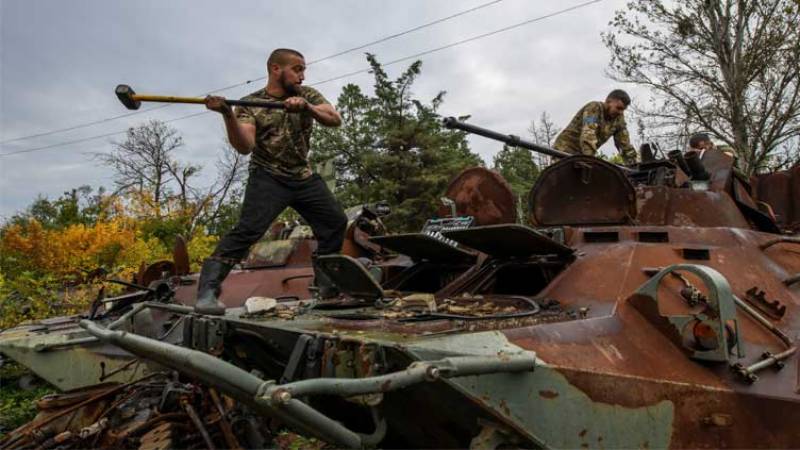 Ukrainian forces achieved their biggest breakthrough in the south of the country since the war began, bursting through the front and advancing rapidly along the Dnipro River on Monday, threatening to encircle thousands of Russian troops.

Kyiv gave no official confirmation of the gains, but Russian sources acknowledged that a Ukrainian tank offensive had advanced dozens of kilometers (miles) along the river’s west bank, recapturing a number of villages along the way.

The breakthrough mirrors recent Ukrainian successes in the east that have turned the tide in the war against Russia, even as Moscow has tried to raise the stakes by annexing territory, ordering mobilisation and threatening nuclear retaliation.

“The information is tense, let’s put it that way, because, yes there were indeed breakthroughs,” Vladimir Saldo, the Russian-installed leader in occupied parts of Ukraine’s Kherson province told Russian state television.

“There’s a settlement called Dudchany, right along the Dnipro River, and right there, in that region, there was a breakthrough. There are settlements that are occupied by Ukrainian forces,” he said.

Dudchany is around 40 km (25 miles) south of where the front stood just a day earlier, indicating one of the fastest advances of the war and by far the most rapid in the south, where Russian forces had been dug into heavily reinforced positions along a mainly static front line since the early weeks of the invasion.

While Kyiv maintained almost complete silence, as it has in the past during major offensives, some officials did describe what they referred to as unconfirmed reports of gains.

Anton Gerashchenko, an adviser to Ukraine’s interior ministry, posted a photo of Ukrainian soldiers posing with their flag draping a golden statue of an angel. He said it was the village of Mikhailivka, around 20 km beyond the previous front.

“Officially, there is no such information yet, but the (Russian) social media pages which are panicking… absolutely confirm these photos.”

The advance in the south mirrors the tactics that have brought Kyiv major gains since the start of September in eastern Ukraine, where its forces swiftly seized territory to gain control of Russian supply lines, cutting off larger Russian forces and forcing them to retreat.

Just hours after a concert on Moscow’s Red Square on Friday where Russian President Vladimir Putin proclaimed the provinces of Donetsk, Luhansk, Kherson and Zaporizhzhia to be Russian territory forever, Ukraine recaptured Lyman, the main Russian bastion in the north of Donetsk province.

That opens the way for it to advance deep into Luhansk province, threatening the main supply routes to territory Moscow captured in some of the war’s bloodiest battles in June and July.

Putin has been responding to Russia’s failures on the battlefield over the past month by escalating: proclaiming the annexation of occupied territory, calling up tens of thousands of men as reservists and threatening nuclear retaliation.

In the south, Ukraine’s advance targets supply lines for thousands of Russian troops – perhaps as many as 25,000 – on the west bank of the Dnipro, where it sent a large contingent to halt a counter-attack Ukraine announced there in August.

Ukraine has already destroyed the main bridges across the Dnipro, forcing Russian forces to use makeshift crossings. A substantial advance along the river could bring those remaining crossings into artillery range.

“The fact we have broken through the front means that … the Russian army has already lost the ability to attack, and today or tomorrow it could lose the ability to defend,” said Oleh Zhdanov, a military analyst based in Kyiv.

“A month of our work destroying their supplies and reducing the combat effectiveness of this group means that they are functioning on minimal rations in terms of ammunition, fuel and food.”

Russian military bloggers described a Ukrainian tank advance through dozens of kilometers of territory along the bank of the Dnipro River.

“When this many Russian channels are sounding the alarm, it usually means they’re in trouble,” Rob Lee, a senior fellow at the Foreign Policy Research Institute think-tank, wrote on Twitter.

The reports of Ukraine’s battlefield advances have come amid chaos back in Russia over the mobilisation, which Putin ordered 10 days ago. Tens of thousands of Russian men have been called up, while tens of thousands of others have fled abroad.

The Russian authorities have not spelled out what the criteria are for who must be sent to fight. Putin has said mistakes were made and people were called up who should not have been.

In the latest indication of confusion, Mikhail Degtyarev, governor of the Khabarovsk region in Russia’s Far East, said on Monday around half of the men called up there had been found unfit for duty and sent back home. He fired the region’s military commissar.