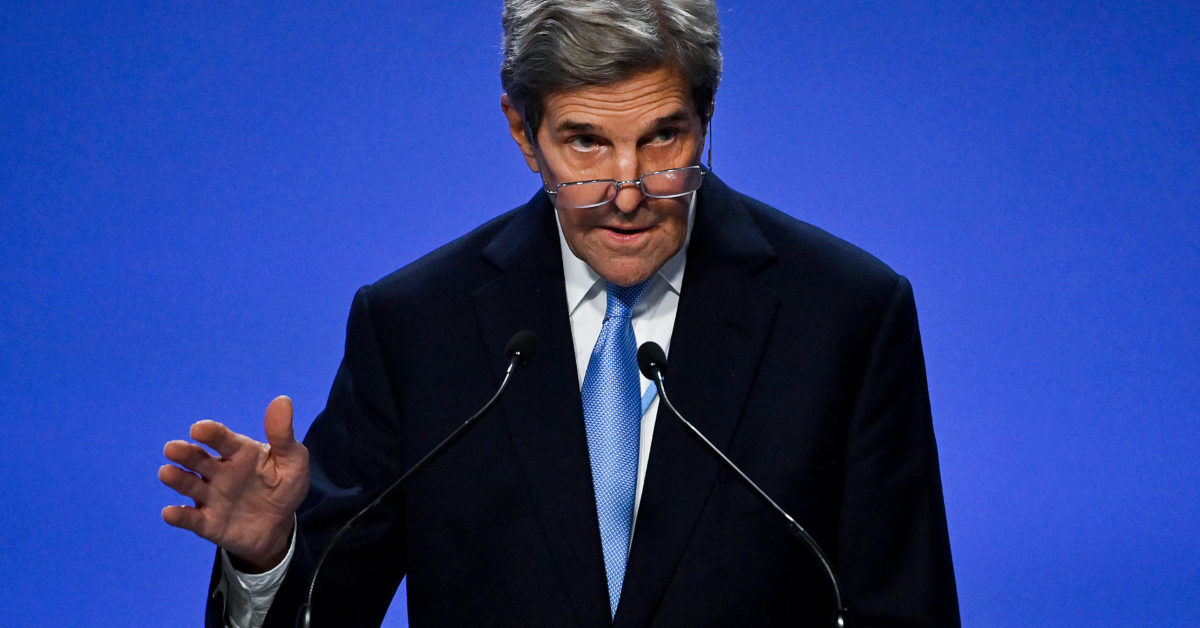 GLASGOW, Scotland â€” The outcome of COP26 will come down to this: Can the U.S. and China â€” the worldâ€™s two great powers and largest polluters â€” compromise?

The pair moved closer to something resembling an agreement on Wednesday, issuing a joint statement of principles for climate cooperation. That included a major victory for U.S. special climate envoy John Kerry: a commitment from China to rein in methane, a major greenhouse gas that has been absent from Chinaâ€™s official climate plan.

That is consequential for the planet since China is far and away the largest methane polluter. But friction remains in the negotiating rooms as nations try to thread together an agreement in the next two days that puts the world on course to limit the worst effects of climate change and increase the flow of money to the most vulnerable countries.

“Cooperation is the only choice for both China and the United States,â€ said Chinaâ€™s climate envoy, Xie Zhenhua. â€œAs two major powers in the world, China and the U.S. shoulder special international responsibilities and obligations. We need to think big and be responsible.â€

Kerry echoed that sentiment, even as he acknowledged the tensions between Washington and Beijing.

â€œThe United States and China have no shortage of differences. But on climate, cooperation is the only way to get this job done. This is not a discretionary thing, frankly. This is science,â€ Kerry told a press conference.

The U.S.-China agreement called for the two to take â€œenhanced climate actionsâ€ and pursue efforts to reach the Paris climate agreement’s stretch goal of limiting global warming to 1.5 degrees Celsius above pre-industrial levels, a threshold scientists say is crucial to avoid some of the worst effects of climate change. But it left unanswered the questions about both countries’ willingness to shift their domestic priorities. AÂ draft textÂ being negotiated for the final COP26 deal that was released early Wednesday called on both China and the U.S. to confront their most painful challenges when it comes to climate change.

A passage in that draft text pressing countries to implement domestic policies that cut emissions could be awkward for President Joe Biden, who saw some of his administration’s most aggressive climate policies stripped from legislation that is still struggling to advance through Congress. And Biden’s likely to draw pushback from lawmakers over calls to boost financial assistance for developing countries to help them protect themselves against the impacts of climate change and cut their own emissions.

Xie pointed to a climate policy rollout from Beijing called “1+N,” which is aimed at peaking Chinaâ€™s emissions by 2030 and drew a point of difference between the â€œcultureâ€ in China and elsewhere. â€œChina is different. Whenever we make commitments, we take real actions and honor our commitments 100 percent,â€ he said.

In meetings with western politicians in Glasgow, Xie has raised Beijingâ€™s concerns over the uncertainty in U.S. politics, since the country has pledged to take aggressive action to eliminate greenhouse gas pollution by mid-century but struggled to enact laws to help achieve them. In one meeting, Xie told a European MP that Biden may well lose the next election, leaving the U.S. commitment to climate efforts in doubt, according to a person in attendance.

If the draft COP26 deal were adopted, Beijing would be under pressure to drop its unwillingness to peak and cut its emissions during this decade â€” a position that experts believe makes meeting the 1.5 degrees Celsius target untenable â€” as countries are asked to update their climate pledges again in the next 12 months.

But Chinese delegates have made clear to negotiators in Glasgow behind closed doors that when it comes to returning to the table with more aggressive goals, it “has a problem,â€ one person familiar with the discussions said.

Kerry also admitted that he was unable to convince China to bring forward its 2030 target to begin to reduce its own greenhouse gas pollution, though the former U.S. secretary of state said he believed that through the collaboration outlined in the framework, it will â€œbecome evident that that could be done much sooner.â€

Bernice Lee, a China expert and the Hoffmann Distinguished Fellow for Sustainability at Chatham House, said it was good news that China and the U.S. were cooperating, but â€œthe statement is not enough to close the deal. The real test of Washington and Beijing is how hard they push for a 1.5 degrees-aligned deal here in Glasgow.â€

But even as Xie was touting the cooperation with the U.S. to a packed press room in the Glasgow conference center, negotiators aligned with China from a negotiating group of mostly emerging economies were telling a closed meeting they wanted to scrap the draft’s section on revising emissions goals and replace it with their own alternative, Diego Pacheco, the head of the Bolivian delegation, told POLITICO.

Asked if he would back a clause in the draft deal that commits to accelerating the phase-out of coal power, Xie said the text was â€œunder negotiation.â€

Chinaâ€™s position in Glasgow is shielded by its alignment with other developing countries in calling for rich countries to contribute cash to help the poorest and most vulnerable to protect themselves against the impacts of climate change and cut their own emissions. Splitting that group and isolating China would likely require the Americans to overcome their internal congressional divisions and stump up billions of extra dollars each year.

Other nations have understood those U.S. limitations ever since the first COP, said David Sandalow, who was a climate negotiator at those talks in the 1990s during the Clinton administration. He said other countries are aware most U.S. funding will come from the private sector rather than public coffers.

â€œIn the past, the U.S.-China relationship has helped to accelerate action and financing. I hope that it can return to that,â€ said Sandalow, who also held a senior position in Obamaâ€™s Energy Department and is now with Columbia Universityâ€™s School of International and Public Affairs. â€œThe people from around the world often have a pretty good understanding of our political situation, and obviously we are looking at a divided nation, politically.â€

Biden has promised to quadruple U.S. climate aid compared with second-term Obama levels by 2024 to reach $11.4 billion annually. Whether Congress remains in Democratic control beyond that date will likely determine if it meets that mark.

Anticipating difficulties in getting Congress to stump up, Kerry is turning to the private sector. Alden Meyer, a senior associate at the E3G think tank, said the climate envoy has beenÂ lobbying investment managers and banksÂ to shift their finance to green projects in developing economies.

â€œKerry’s been running around the world and talking to BlackRock and JPMorgan and others,â€ he said. â€œThat’s productive. But they have to deliver the goods, and they have to stop financing fossil fuels.â€

At COP26, Kerry has also underscored progress in getting other nations to contribute more finance, suggesting rich countries might be able to achieve their promise of mobilizing $100 billion annually by the end of 2022 â€” earlier than the 2023 target floated by Canada and Germany, but still later than the original 2020 deadline.

The politics in the U.S. mean the finance limitation “is always there,â€ Bangladesh climate envoy Abul Kalam Azad, who leads a negotiating group of climate vulnerable countries, told POLITICO. But he said U.S. leadership on finance, especially in the early days of COP26, has inspired confidence.

â€œThey showed us hope,â€ he said. â€œWe believe the U.S.A. will take the lead so that these $100 billion dollars are met well ahead of the present commitment of 2023.â€

Last week, the U.S. joined a coalition of countries pushing to accelerate cuts to greenhouse gas emissions. But with that comes a recognition that finance must be made available for poorer countries.

That hurdle may be huge. In anÂ interview with BloombergÂ on Wednesday, India Environment Secretary Rameshwar Prasad Gupta brought that financial need into focus, saying the country, the world’s third largest greenhouse gas polluter, would need $1 trillion in public funds from developed countries by 2030 if it were to meet its newly announced climate goals.

For the U.S. to maintain its alliance with the most vulnerable countries, it will need to agree a serious new commitment on money that helps countries adapt to the impact of climate change, a particularly under-resourced area compared with funding to cut emissions.

In Wednesdayâ€™s draft, which is expected to be replaced with new text by Thursday morning, plans for a new global goal on adaptation were left undefined. Speaking for a group of African countries, Gabon’s environment minister Lee White said COP26 â€œwill be considered a failure by Africaâ€ unless this program is set in stone.

Aiyaz Sayed-Khaiyum, Fijiâ€™s attorney general and lead negotiator at COP26, agreed with that assessment, saying it was “really critically important” for the island nation.

â€œWe are very low emitting â€” 0.006% in total carbon output of the world,â€ he said. So while lowering the Pacific islands’ greenhouse gases wasn’t a major concern, funding for infrastructure to makes his country resilient to climate threats is far more pressing.

â€œWe’ve had 13 cyclones since 2016. You know, one of them was the strongest storm ever in the southern hemisphere, wiped off one-third of the value of GDP in 36 hours, killed â€¦ 44 people,â€ he said.

Esther Webber contributed to this report.