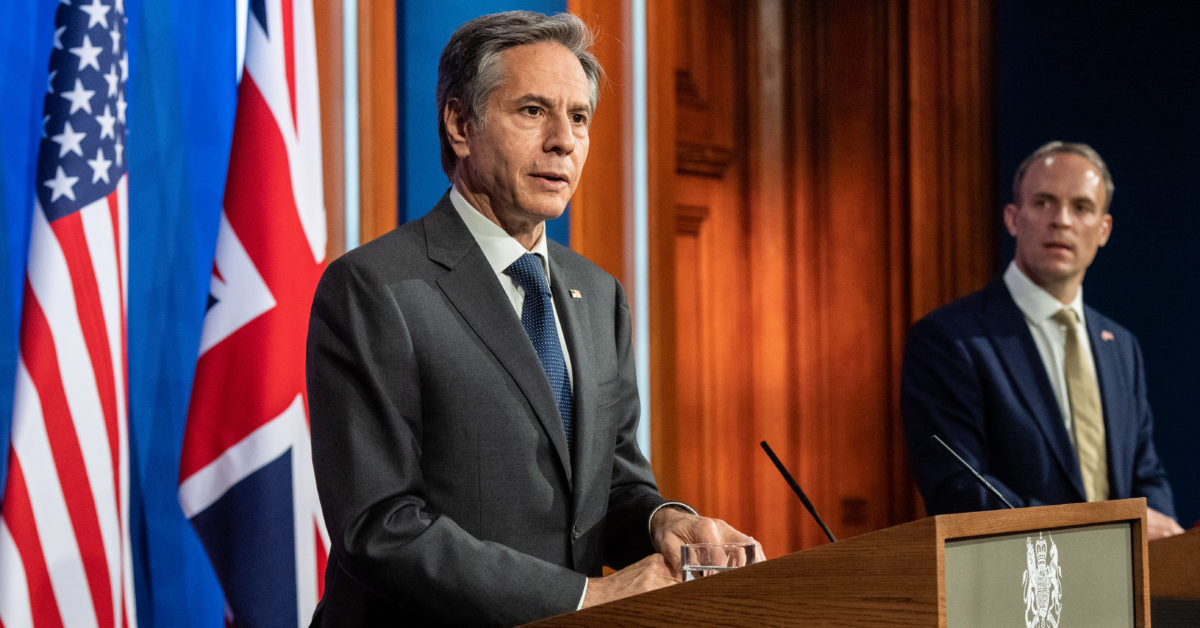 LONDON â€” U.S. Secretary of State Antony Blinken hailed the U.K. as his country’s closest ally ahead of President Joe Bidenâ€™s trip to Europe next month, though he issued a gentle nudge to his hosts to prioritize “stability” in Northern Ireland amid tensions there over the impact of Brexit.Â

â€œThe United States has no closer ally, no closer partner than the United Kingdom, and Iâ€™m glad of the chance to say that again here today.”

The two men presented a united front as they were challenged on potential differences in approach to the withdrawal of troops from Afghanistan and the implementation of the so-called Northern Ireland Protocol â€”Â the section of the Brexit deal with the EU that is designed to prevent the need for a hard border with the Republic of Ireland to the south.Â

Raab said the U.K. â€œrecognizes and appreciatesâ€ the U.S. contribution to the Good Friday Agreement â€”Â the 1998 deal that brought decades of widespread sectarian violence to an end â€” and stressed that the Northern Ireland Protocol would be enacted in a â€œbalancedâ€ way.

Meanwhile Blinken alluded to some of the problems associated with the border arrangements so far, telling journalists: â€œAs Brexit-related provisions of the Northern Ireland protocol begin to be implemented, we will continue to encourage the U.K. to prioritize political and economic stability.â€

Biden risked straining relations with the U.K. government during his presidential campaign when he warned in a tweet that the GFA could become a â€œcasualty of Brexit.â€

On another potential point of tension, Raab was asked if the U.S. had sidelined concerns voiced by British military figures on Afghanistan. â€œWe do not feel ignored, and our focus in the meantime is on protecting our troops,â€ while Blinken stressed Washington would abide by the principle of â€œin together, adapt together, out together,” he said.

The U.K. and U.S. have been at pains to underline their solidarity since Biden took office, and his visit to the U.K. for the G7 summit next month will be part of his first overseas trip as president.

While the two foreign ministers condemned Iranâ€™s detention of British and U.S. citizens, Raab was not able to offer fresh hope of the release of Nazanin Zaghari-Ratcliffe, imprisoned there since 2016. He said reports that she was close to being freed were â€œnot accurateâ€.Â

Raab also placed emphasis on a shared approach to China, promising to â€œstand upâ€ to Beijing on human rights at the same time as engaging on climate change.