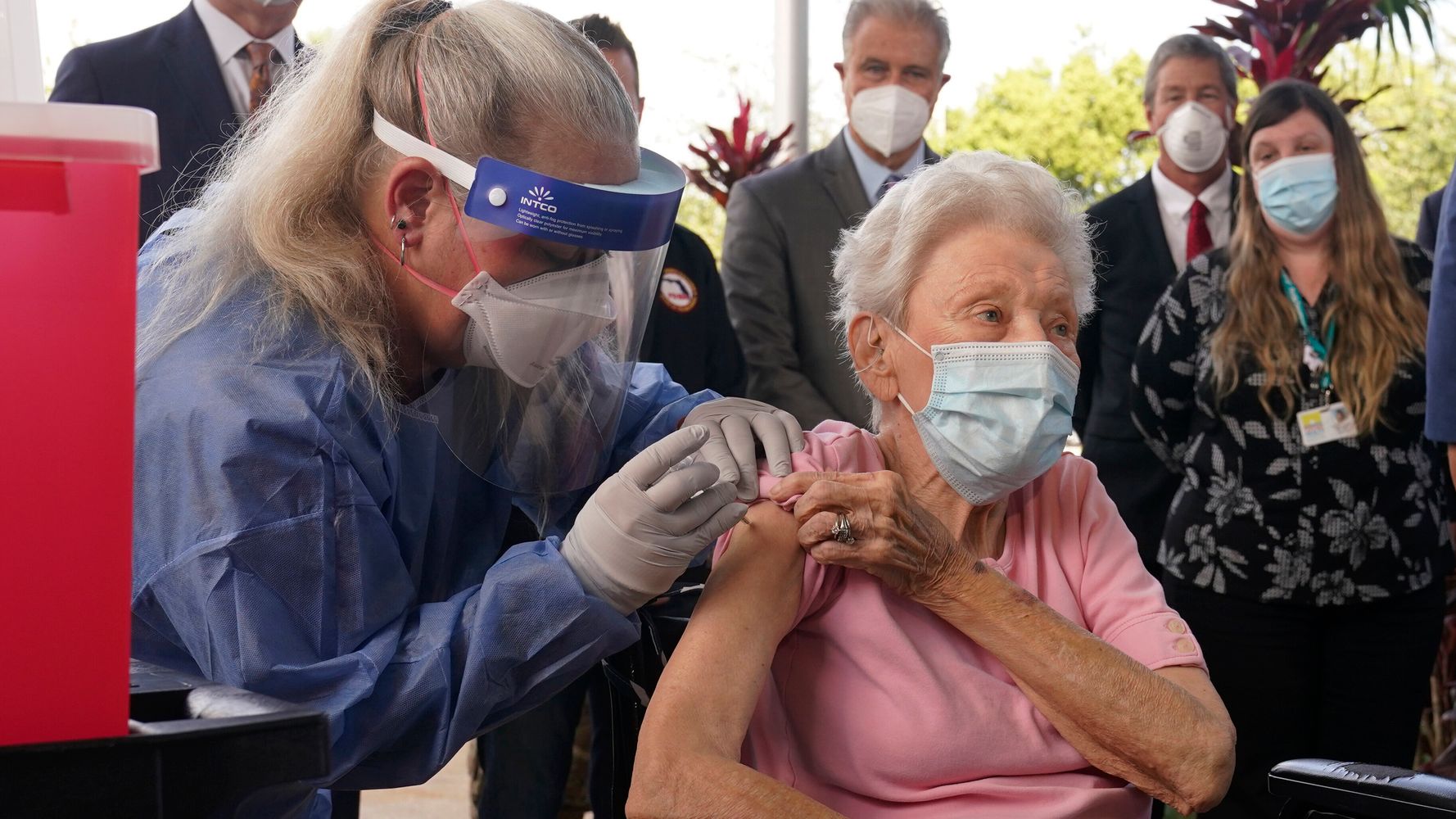 POMPANO BEACH, Fla. (AP) â€” The first COVID-19 vaccinations are underway at U.S. nursing homes, where the virus has killed more than 110,000 people, even as the nation struggles to contain a surge so alarming it has spurred California to dispense thousands of body bags and line up refrigerated morgue trucks.

With the rollout of shots picking up speed Wednesday, lawmakers in Washington closed in on a long-stalled $900 billion coronavirus relief package that would send direct payments of around $600 to most Americans. Meanwhile, the U.S. appeared to be days away from adding a second vaccine to its arsenal.

At the same time, a major snowstorm pushing its way into the Northeast raised concern it could disrupt distribution of the first vaccine.

Nursing home residents in Florida began receiving shots Wednesday, after nearly 2,000 such vaccinations were administered in West Virginia on Tuesday. Thousands more are scheduled there in the coming days. Other states are expected to follow soon.

The elderly and infirm in long-term care have been among the most vulnerable to the virus and, together with health workers, are first in line to get the limited, initial supplies of the vaccine developed by Pfizer and Germanyâ€™s BioNTech. Nursing home residents and workers account for more than one-third of the nationâ€™s 300,000 or so confirmed deaths from COVID-19.

In Florida, the longtime retirement haven whose 141,000 nursing home residents are the second most of any state behind California, eagerness to get the vaccine was mixed with some anxiety.

â€œI hope it will help me from getting COVID,â€ said 88-year-old retired schoolteacher Vera Leip, a resident of John Knox Village near Fort Lauderdale. â€œI donâ€™t know anything about it, but I would prefer not to have it.â€

The home is not requiring its employees to get the vaccine, and only 80 of the 200 staffers in the skilled nursing facility volunteered for the first wave, said Mark Rayner, its director of health services. He said many of those declining the shot are African-American and donâ€™t trust it, given the nationâ€™s history of medical experimentation on Black people.

â€œThey are frightened,â€ he said. â€œThere is that culture line even as much as we educate them.â€

West Virginia, with one of the oldest and unhealthiest populations in America, is working with small and local pharmacies to reach nursing homes across the heavily rural state, leapfrogging states that are relying on a partnership with the CVS and Walgreens drugstore chains to kick in any day now.

Marty Wright, head of the West Virginia Health Care Association, which represents nursing homes and assisted living communities, said the stateâ€™s pharmacies expect to get 7,000 doses into arms by the end of the week.

The developments come as as the crisis grows increasingly dire by many measures.

The U.S. recorded over 3,000 deaths on Tuesday for the third time in less than a week, easily eclipsing the peaks seen last spring. New cases are running at over 212,000 a day on average. And the number of Americans in the hospital with COVID-19 hit another all-time high Tuesday of about 113,000.

California is distributing 5,000 body bags mostly to the hard-hit Los Angeles and San Diego areas and has 60 refrigerated trailers standing by as makeshift morgues. The state is averaging 163 virus deaths per day, up from 63 just two weeks ago.

Many California hospitals are running out of space in intensive care wards, as the state records an average of about 32,500 new virus cases a day. That is up from about 14,000 a day at the start of the month.

In Fresno County, officials said just a few ICU beds remained available and were filling rapidly. To keep up, the countyâ€™s hospital system has contracted with a Virginia company to supply doctors, nurses and others to staff a temporary 50-bed facility that will start receiving patients by the end of the week.

Bruce Barton, EMS director for Riverside County, said a couple of hospitals hit capacity in the past week and local officials had to step in to take some bodies.

Hospitals are also under pressure in Arizona, where a record 92% of beds are filled, nearly half of them with people with COVID-19.

â€œThatâ€™s a staggering statistic when you think about the things that can afflict people,â€ said Dr. Joshua LaBaer, executive director of Arizona State Universityâ€™s Biodesign Institute. â€œAnd it certainly means that hospitals at this point are having to make decisions about keeping people out of the hospital to keep beds available for the COVID patients.â€

In the nationâ€™s capital, congressional leaders said they hoped to seal a deal as early as Wednesday on a package that would extend aid to individuals and businesses and help ship vaccines to millions. It would include enhanced federal unemployment benefits and another round of stimulus checks.

On Thursday, a government advisory panel will consider whether to endorse emergency use of a second vaccine, made by Moderna.

U.S. Health and Human Services Secretary Alex Azar said the government is tracking the vaccine shipments precisely, has staffers in place to receive them and believes the companies transporting them â€” FedEx and UPS â€” have the expertise to navigate the storm.