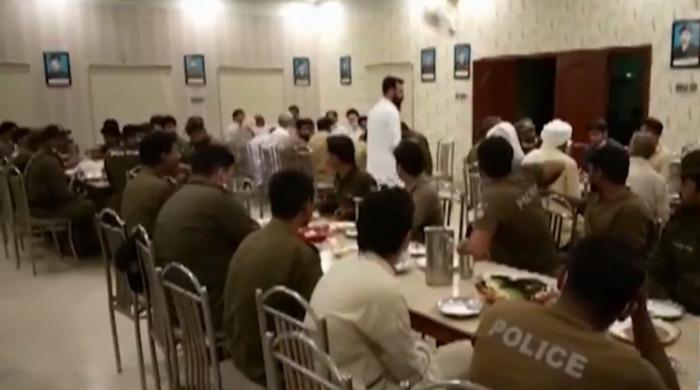 Vehari Police displayed empathy and generosity when its officers shared their food and drink at Sehri and Iftar with protesters ofÂ  a banned organisation that attacked them on the streets a few days ago.Â

However, Vehari Police treated the protesters in a generous manner by sharing food and drink with some of the protesters who were arrested, at Sehri and Iftar.

The protesters were brought to the Police Lines Station in Vehari where they were seated at tables with police officers and offered food.

It was a moving sight to see the same protesters, who had subjected the police to assault on the streets, sitting at one table with the same officials they had clashed with on the streets, sharing food and drink.

The act of generosity moved the protesters, who seemed ashamed at their actions and regretted their decision to stage violent protests across the country.

“Whatever we did was not right,” said one of the protesters.

“Our brothers who committed violence, committed a crime,” said another. “They also pelted stones [and committed other violent acts] which was wrong.”

A third said he would spread the message among his friends that without respecting police, the masses cannot be safe.

Locals appreciated the step taken by Vehari Police, saying that they had set an example for all to follow and dispelled the impression that police in Pakistan subject prisoners to inhumane treatment.Â