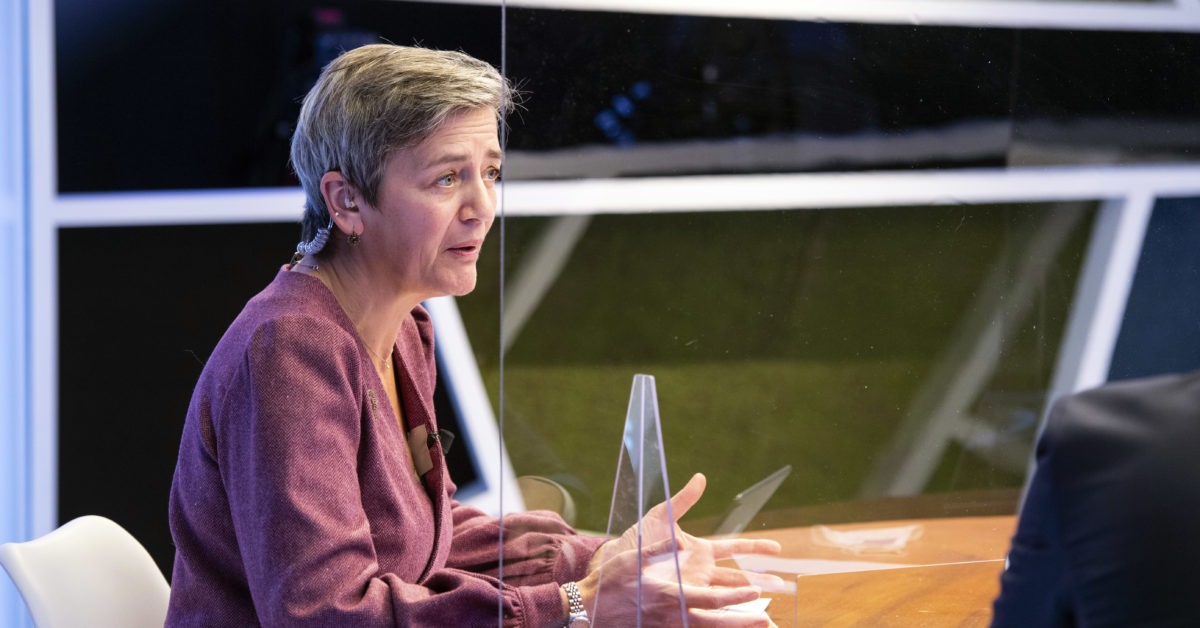 The Danish politician added that the European Commission’s new online content proposal, known as the Digital Services Act, would have intervened before these private companies blocked the former president from posting online. Her words run counter to those of leading politicians, including Germany’s Angela Merkel, who have criticized that decision.

â€œI canâ€™t say I would have done it differently if I was in their shoes,” Vestager told the Digital Bridge, POLITICO’s transatlantic tech newsletter, when asked if she agreed with Facebook, Google and Twitter banning Trump from using their platforms.

“But with the Digital Services Act, the point is that it shouldnâ€™t have gotten that far. There would have been interaction with the user along the way,” she added. “We want to increase transparency on how these decisions are made. If platforms want to ban you, they have to notify you and explain what that is.”

The Dane is in charge of the bloc’s online content aimed at holding Big Tech to account for failing to tackle hate speech online.

In December, Brussels outlined its new content-moderation proposals, including potentially hefty fines if social media companies did not stop online hate speech and illegal products from circulating widely on their digital networks.

Separate plans â€” in a bill called the Digital Markets Act â€” also outlined a fundamental revamp of the bloc’s antitrust rules, potentially giving regulators the power to step into markets before a specific company can become too dominant.

Both legislative proposals are expected to face intense lobbying from Big Tech and civil society groups, with final rules expected to come into force by 2023 at the earliest.

Vestager expressed dismay over the recent “attempted coup” in Washington, in which many of the rioters used online platforms and message boards to coordinate their activity before storming Capitol Hill. In the wake of those events, the main social networks banned Trump for his role in potentially inciting the violence, and U.S. lawmakers filed impeachment articles against the now-former U.S. president. His trial in the U.S. Senate starts next week.

“The U.S. Congress situation is just the latest. Weâ€™ve had the Cambridge Analytica scandal, and all sorts of reports of deliberate disinformation on the platforms,” Europe’s digital chief said in reference to the 2018 scandal in which tens of millions of people’s Facebook data was mishandled as part of efforts to target them with online political messages. “The idea is the same in the Digital Services Act and Digital Markets Act: with size and power comes responsibility.”

Vestager welcomed renewed efforts to foster connections between Washington and Brussels. Ursula von der Leyen, the Commission president, has called for a so-called EU-U.S. Trade and Tech Council to create a transatlantic partnership around rules for new forms of technology like artificial intelligence and quantum computing.

The Commission official said that U.S. lawmakers â€” many of whom once derided Brussels’ previous efforts to clamp down on the excesses of Silicon Valley â€” now had come around to the European Union’s view that greater regulatory and legislative oversight was required for companies that have become dominant across large parts of the digital economy.

Yet she cautioned that where once Europe had a monopoly over digital rulemaking, including the region’s privacy standards that have become the global de facto standard, other countries like the U.S. were quickly catching up and had moved beyond the EU in some areas such as imposing bans on the use of facial recognition technology.

“We shouldnâ€™t think we are the only ones with sensitivitiesÂ around technologyâ€™s impact on fundamental values,” Vestager said. “With the Digital Services Act and Digital Markets Act, Europe is still in the lead, but the differences with the rest of the world are no longer that big.”

Still, the Dane warned that she was not willing to slow down Brussels’ digital overhaul â€” even to give Washington time to catch up. Several potential tech policy issues, including competition markets reform, online content rules, and federal privacy legislation, have become popular issues for both the Joe Biden administration and the U.S. Congress.

“Weâ€™ve done these pieces of legislation to deal with our own problems,” Vestager said, adding that Europe had been working through these problems for years and had its own digital priorities to focus on.

“I have a sense of urgency,” she said, highlighting the series of recent digital problems, including the spread of COVID-19 misinformation across social media that had put people’s health in danger. “It’s a wake-up call.”