Victorian retiree scammed out of $26,000 after email intercepted

A Victorian grandfather is tens of thousands of dollars out of pocket after an email with an invoice from his builder was intercepted.

Bill Hall thought he was paying a tradie $26,000, but instead the email had been grabbed by hackers and resent to him with different bank details.

The 76-year-old retiree was in the middle of renovating his home and paid the bill, thinking it was a normal invoice, and now he wants his bank to reimburse him.

“About three weeks later, I got a phone call from the Bendigo Bank fraud people,” he told 9News.

“(They told me) there’s a discrepancy between the name on the account and the number of the account that I transferred the money to.”

The retiree, from Hurstbridge, north-east of Melbourne, now wants his bank to pay the money back and claims it failed to check the name of his builder against the fake account number.

“I’m really frustrated that this obvious failure within the banking system, there’s just been sort of swept under the carpet being totally ignored,” Hall said.

“It’s very concerning. It means, I’m a self-funded retiree, so I’ll have to just sell out some of my investments to actually pay these $20,000, so that means that the weekly amount is a bit less.”

Consumer advocates are also pushing for banks to take more responsibility when it comes to their customers falling victim to scams by investing in fraud prevention. 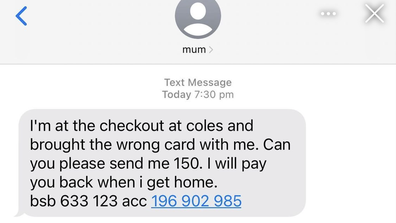 Scam text from ‘mum’ leads to account at Aussie bank

According to the ACCC there were $2 billion in scam losses last year.

However that figure could be even higher as many people feel too ashamed to report losses.

The Australian Federal Police launched “Operation Guardian” to identify and protect the 10,000 Optus customers who had 100 points of identity leaked after the cyber attack.

It is still unclear exactly how many ﻿customers’ driver’s licences, passport numbers and Medicare numbers were compromised in the hack.