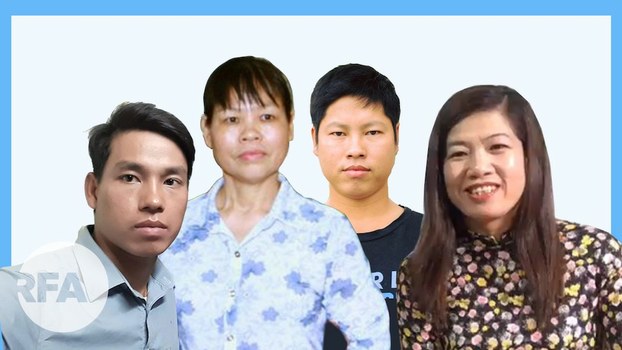 Trinh Ba Phuong, an activist who was arrested last week along with his mother and brother for publicizing a decades-old land dispute that came to a violent end in January, has invoked his right to remain silent and is not cooperating with police, his lawyer said Monday.

Trinh, his mother Can Thi Theu and brother Trinh Ba Tu had been outspoken in social media postings about a violent police raid in January at the Dong Tam commune, 25 miles south of the capital Hanoi. They had also openly offered information to embassies and other foreign figures to try to raise awareness of the incident.

Can and Trinh Ba Phuong were arrested Wednesday from their home in Hanoiâ€™s Duong Noi ward, while Trinh Ba Tu was arrested at his home in nearby Hoa Binh province.

Land rights petitioner Nguyen Thi Tam was arrested in Duong Noi on the same day on the same chargesâ€”making, storing, distributing or disseminating information, documents and items against the Socialist Republic of Vietnam in violation of Article 117 of Vietnamâ€™s penal code.

The Jan. 9 raid on Dong Tam protesters, involving 3,000 security officers, was the latest flare-up of a long-running dispute over a military airport construction site about 25 miles south of Hanoi.

Three police officers and a village leader lost their lives during the raid. On Friday, authorities in Vietnam indicted 25 people on murder-related charges for their involvement in the deadly clash.

Trinh Ba Phuongâ€™s lawyer Dang Dinh Manh told RFA Monday that since Trinhâ€™s arrest, he has â€œinvoked his right to remain silentâ€ and is â€œnot cooperating with police.â€

Dang said he was able to file paperwork for the defense of his client after visiting Hanoiâ€™s investigation security office.

â€œAccording to the rules, in cases concerning national security, the participation of lawyers is limited, however, when I came directly to the police station in Hanoi, they agreedÂ [to my participation],â€ he said.

â€œTypically, within 24 hours after the defense procedures are completed, the police will issue an approval letter for the lawyer. It might also take two or three days, but the police said they would try to reply to me in the next few days,â€ he added.

He said authorities are handling their cases in two separate investigations. It was not immediately clear why Can was sent to Hoa Binh when she was arrested in Hanoi at the same time as Trinh Ba Phuong.

Trinh Ba Khiem, the Trinh familyâ€™s patriarch, confirmed by phone to RFAâ€™s Vietnamese Service that he was able to drop off supplies to his wife and son in Cham Mat.

â€œThis morning, I went to the office of the Ministry of Public Security and asked them to allow me to deliver a care package to my wife and son. The police in the ministry called the detention center and they allowed me to leave those things,â€ he added.

The father and husband was however not allowed to leave medicine and osteoporosis milk to his wife, as the detention centerâ€™s officials said he could only drop off items worth 50,000 dong (U.S. $2) per visit.

Trinh Ba Phuong and Nguyen Thi Tam in Hanoi, meanwhile, were allowed only to receive clothes from their relatives, and had to buy other supplies from the detention campâ€™s cafeteria.

The 88 Project, an Illinois-based NGO that tracks Vietnamese political prisoners, last week reported that in 2019 an increasing number of people were arrested under article 117.

â€œMany of those charged with this crime had no history of activism andÂ were solely targeted for their peaceful expression online. Forty percent of the people arrested in 2019 were online commentators,â€ the NGO said.

Vietnam, with a population of 92 million people, of which 55 million are estimated to be users of Facebook, has been consistently rated â€œnot freeâ€ in the areas of internet and press freedom by Freedom House, a U.S.-based watchdog group.

Dissent is not tolerated in the communist nation, and authorities routinely use a set of vague provisions in the penal code to detain dozens of writers and bloggers.