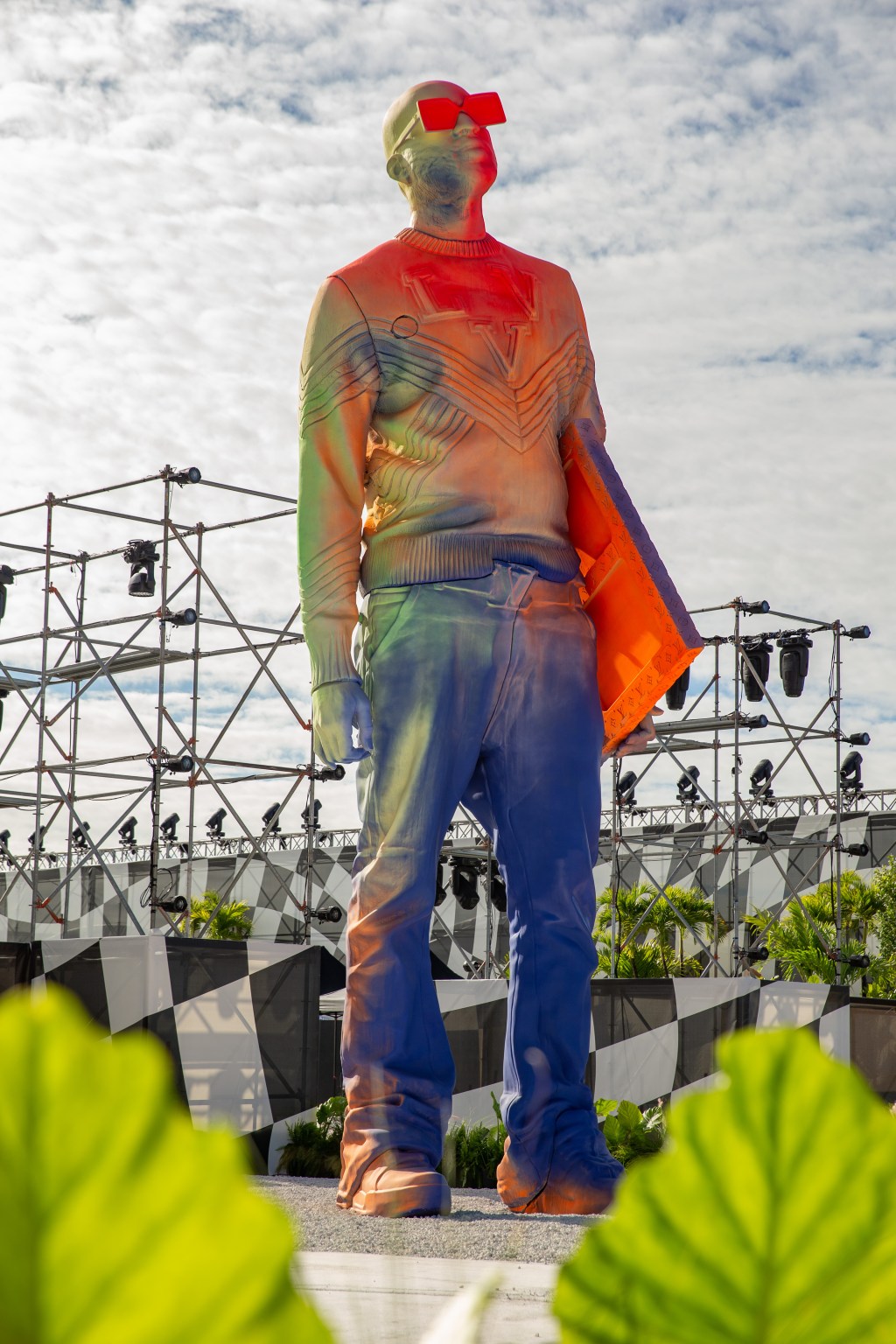 As the robinâ€™s egg blue sky turned to deeper blue, then dove gray with streaks of darker clouds, the reprise show of Louis Vuittonâ€™s menâ€™s spring 2022 collection began â€” and what had been planned as an uplifting celebration turned into a tribute to the late designer Virgil Abloh, who died Sunday at age 41.

â€œOh boy â€” this is the hardest speech I have ever given,â€ Michael Burke, chairman and chief executive officer of Louis Vuitton, told the hushed crowd of about 1,500 people, who had taken ferries over from the mainland for a 30-minute ride to a wharf where the show was held (the celebrities arrived by chic gray speed boats with the LV logo and monogram stenciled on the side in blue along with the numbers 7.2, representing the repeat of Ablohâ€™s seventh show for the brand).

Burke emotionally talked of meeting Abloh with Kanye West in Tokyo when fashion designer and founder of A Bathing Ape Nigo introduced them; Burke then invited the two to intern at Fendi. Their relationship developed to the point where, by the time Abloh joined Burke at Vuitton, the CEO considered him â€œlike a sonâ€ whose passion â€œwas inconceivable to meâ€¦.But know through his work, his vision, his profound sense of humanity, this great manâ€™s legacy will endure.â€

The schedule of events on Monday and Tuesday prior to the show continued to evolve as the hours progressed, with the original plan of a store cocktail being scrapped in favor of one-on-one appointments on Wednesday; the set VIP dinner at Carbone was loosened into a nonseated, friends-of-the-house affair. The mood at the buzzy restaurant was subdued and somber Monday evening around 8 p.m., as a handful of celeb guests like Luka Sabbat, Venus Williams, Yahya Abdul-Mateen II and Deacon Philippe sat amongst friends for spicy rigatoni, branzino and lemon cheesecake.

Come show day, however, the mood turned much more buoyant, with the attendees ready to honor and celebrate Abloh. Guests arrived in the afternoon to a marina, where trays of white chocolate flan and tuna tartare were passed about as white wine was sipped and people mingled. Many of the brandâ€™s biggest clients were in attendance, decked in head-to-toe logo and plenty of color (in contrast, editors and celebrities opted for black). Around 4 p.m., boats were boarded and departed for the wharf.

â€œHe was a one-off, he was a pioneer,â€ photographer Juergen Teller said on the boat ride over, iPhone in hand as he was busy at work snapping the scene around him.

Upon docking at the Miami Marine Stadium, a historic landmark designed by Hilario Candela in 1963, guests milled about the dock prior to the showâ€™s 5:30 sunset start time. Vuitton had worked closely with the city and state to clean the basin area, with 15 submerged or abandoned vessels being removed and 180 cubic yards of trash cleared out. The barge where the show was held is repurposed and 90 birch trees decorating the set will be reused.

â€œThe first time I met him was in Paris,â€ said Maluma, dressed in a shimmering metallic silver long coat embossed with the LV logo. â€œHis energy â€” he has a beautiful aura. A blue aura. The first time that I saw him I met one of my biggest idols.â€

Of Ablohâ€™s impact in the fashion and culture space, Maluma said he had changed the world.

â€œFor me as an artist, he really changed the way I see the world. Between music and culture and the fashion industry, he changed my mind and he bettered my vision.â€

â€œHis legacy speaks for itself,â€ said Fear of Godâ€™s Jerry Lorenzo, who was supposed to be in New York at the Footwear News Achievement Awards but flew down for the event.

â€œItâ€™s so sad what happened,â€ said musician Rauw Alejandro. â€œHe inspired music and also culture. And as a musician from the younger generation, seeing GOATs doing big things, doing what they do, is really inspiring. Iâ€™m really sad about what happened and Iâ€™m here celebrating life and culture.â€

â€œI met Kanye in Tokyo, and Virgil was his assistant,â€ Silvia Venturini Fendi said prior to showtime. â€œAnd Kanye said â€˜I want to come and do a stage with you at Fendi.â€™ And then one day he called me and said â€˜Iâ€™m in Rome, I want to find an apartment. Iâ€™d love to work here and do a stage of six months.â€™ They came over and I thought it was a joke. But they took an apartment. They would come and work, the both of them, and then it would be like â€˜Iâ€™m going to leave at 6,â€™ asking me a kind of permission, and I would go â€˜where are you going, why are you going?â€™ and they would say â€˜we have to perform at 8 tonight,â€™ something like that.â€

â€œItâ€™s weird,â€ said Jonathan Anderson, who knew Abloh from being judges for the LVMH Prize and also a fellow young designer at the giant luxury group. â€œIt really makes you aware of mortality.â€

As for Ablohâ€™s impact, Anderson summed it up in one word: â€œUrgency. He had this urgency to do things that was remarkable. I will miss him.â€

After the entire Arnault clan entered â€” headed by Bernard Arnault but including his wife and all his children â€” the show began, a parade of styles that Abloh had shown by film in June but with 10 new looks, some worn by the likes of Kid Cudi, Quavo and Offset. The collection pushed forward many of the elements Abloh had been developing throughout his tenure at the brand â€” and further proved, as Burke said, that the designer was a constant stream of ideas that was difficult to stem.

There were knit football jerseys bearing the Vuitton name; full-pleated or flared skirts; belted suit jackets, letter jackets and puffers; long coats in everything from tie-dye to checkerboard patterns to reflective, slews of â€™90s ravers references and more. The shoes ranged from sneakers to padded boots, while the bags came in styles ranging from tiny strapped purses to record cases to a humorous backpack in the shape of a neon tie-dye fish.

There were poignant moments throughout, including the soaring strings that preceded the show and a red hot air balloon flashed like a beating heart to one of the songs that had a voice asking to be shown the way because â€œI am looking for a path to lead.â€ Abloh, after all, was a DJ along with many other things, and the music ranged from electronic to rap, jazz to bossa nova.

In the end, the evening was perhaps summed up best by Abloh himself, whose voice was played before the show and at the finale. He said the inspiration for the show came from trying to recapture childhood, since children always reach a point where â€œthey reach a sense of wonderment and stop using their mind and start using their imagination.â€

With that, the lights faded and the hot air balloon lit up once again as a light show played on the distant shore and waves of multicolored lights flashed across the stadium stands across the canal. Suddenly there was a flash of fireworks lighting the sky â€“ reds, yellows and white bursts of rockets. Most children do, after all, love fireworks.

The crowd was hushed as they filed out to the after party area, dominated by a 30-foot statue of a rainbow-colored Abloh holding an LV case and staring at the hot air balloon and into the sky.

Then a drone show lit up the now-dark sky with the LV logo, a paper airplane shape and the letters VA.

The drones faded, then re-formed to spell out a simple declarative sentence: â€œVirgil was here.â€