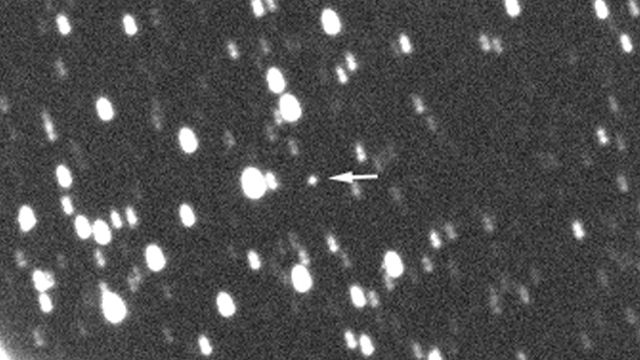 The Rome-based Virtual Telescope Project took the exposure over five minutes using its robotic telescope, a PlaneWave 17-inch, tracking Webb on a Paramount ME mount.

The image captured Webb just as it was arriving at its destination at the Earth-sun Lagrange Point 2Â (L2), which is about 930,000 miles (1.5 million kilometers)Â away from our planet, project manager Gianluca Masi said in a statement.

“Our robotic telescope tracked the apparent motion of theÂ James Webb Space TelescopeÂ (JWST), which is marked by an arrow in the center,” he added. Masi found the famed space observatory in the bowl of the Big Dipper, and NASA says you may be able to spot it with binoculars if you know where to look.

Webb is just getting started. NASA and prime contractor Northrop Grumman outlined Monday (Jan. 24) what to expect in the next five months of the telescope’s commissioning period, which includes aspects such as precisely aligning the mirrors, turning on and testing instruments, and taking some engineering images.

“We expect the first science images from JWST to come back in about five months,” Amber Straughn, the deputy project scientist for Webb science communications, said during a webcast Webb event on Monday. Â

In the longer run, Webb has an ambitious mission to study the early universe, figure out how fast our universe is expanding and accelerating, and look at objects ranging from galaxies to exoplanets.Â

The $10 billion telescope launched Dec. 25 following years of delays, but the mission has been smooth sailing since it went to space. Another big milestone, which was the complex deployment of Webb’s main mirror, concluded with only minor hitches earlier this month.