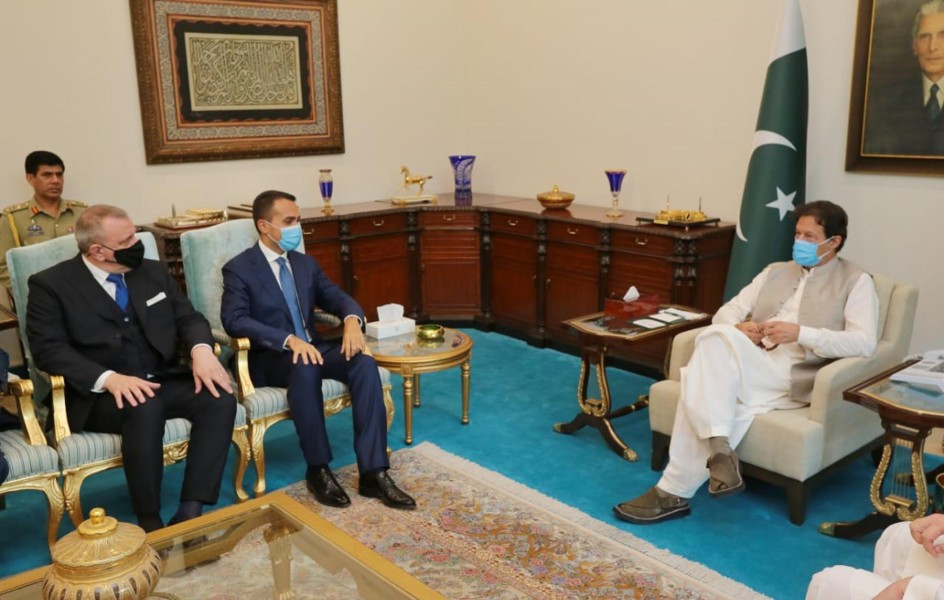 Prime Minister Imran Khan has said that it is vital to stabilise the security situation and bring permanent peace to Afghanistan as well as preclude any mass exodus of refugees into Pakistan.

According to a statement of the Prime Minister’s Office (PMO), the premier expressed these remarks during a meeting with Italyâ€™s Foreign Minister Luigi Di Maio on Monday. â€‹Views were exchanged on the latest developments in Afghanistan as well as bilateral relations between both leaders.

According to the statement, PM Imran said that Pakistan had suffered enormously due to protracted conflict and instability in Afghanistan. “As such, a peaceful, secure and stable Afghanistan is in the best interest of Pakistan as well as regional countries.”

At this critical juncture, the prime minister said, it is vital to stabilise the security situation in Afghanistan and take steps to consolidate peace. “In this context, preventing humanitarian crisis and stabilising the economy are the most urgent priorities,” PM Imran was quoted as saying by his office.

The premier stressed that the international community must stand in solidarity with the Afghan people, undertake positive engagement, and create incentives for ensuring sustainable peace, stability and economic development in Afghanistan.

â€‹In the bilateral context, the prime minister said that Italy is a vital partner for Pakistan, stressing the importance of enhanced collaboration in diverse areas, including trade and investments, defence and people-to-people contacts. He also highlighted that the large Pakistani diaspora in Italy constituted a strong bridge between the two countries.

Later, the Italian FM also met his Pakistani counterpart Makhdoom Shah Mahmood Qureshi as both leaders talked about the latest developments in Afghanistan and bilateral relations.

Foreign Minister Qureshi shared Pakistanâ€™s perspective on the evolving situation in Afghanistan. “Stressing the importance of a peaceful and stable Afghanistan for Pakistan and the region, the foreign minister highlighted Pakistanâ€™s efforts for regional peace, security and stability,” an official statement said.

Qureshi underscored the need for the international community to enhance engagement with Afghanistan with positive messaging and through constructive actions. In particular, he emphasised the imperatives of addressing the urgent humanitarian needs and ensuring the economic stability of Afghanistan.

He also apprised the visiting FM of his interactions with the leadership of the immediate neighbouring states of Afghanistan and efforts to evolve a coordinated approach.

Italy is home to one of the largest Pakistani diasporas in Europe. The two countries closely collaborate bilaterally, in the context of EU, and at the United Nations, especially on the issue of UN Security Council reforms.

The Italian FM, who is on an official visit to Pakistan, expressed these remarks during a meeting with Chief of Army Staff (COAS) General Qamar Javed Bajwa on Monday.

During the meeting, according to the ISPR, matters of mutual interest, regional security, the current situation in Afghanistan and collaboration in humanitarian assistance for the war-torn country were discussed.

“Pakistan values its relations with Italy and we earnestly look forward to enhance mutually beneficial multi-domain relations based on common interest,” General Qamar was quoted as saying by the ISPR.