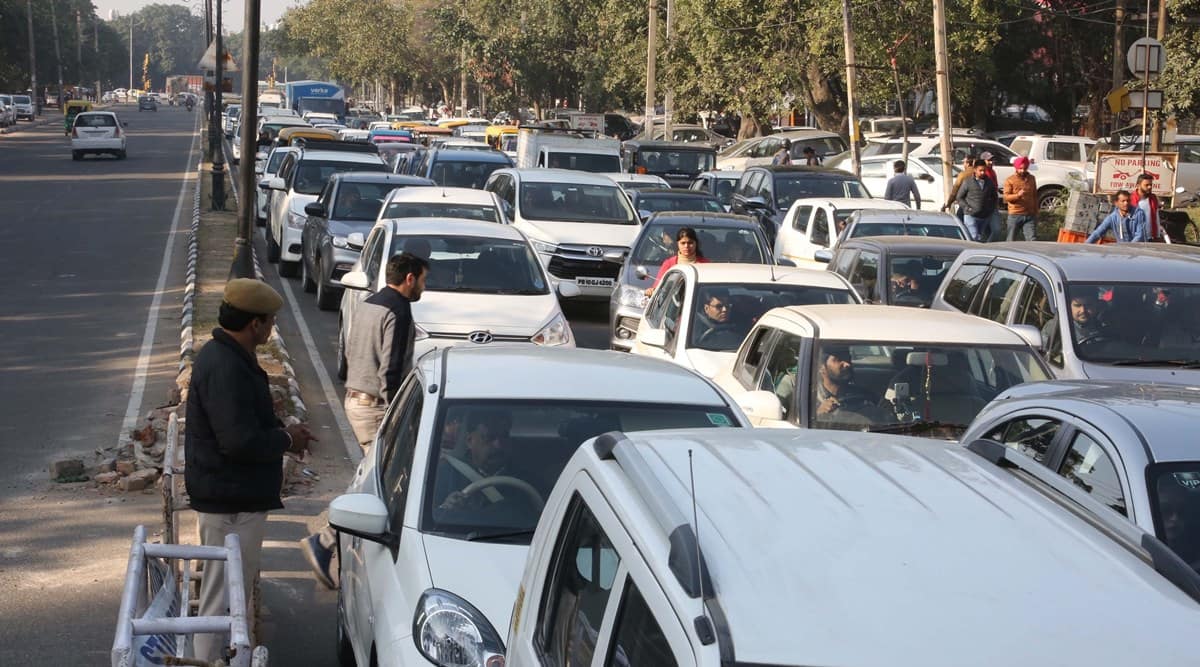 Chandigarh, one of the earliest planned cities of the country, is bursting at its seams, having acquired the dubious honour of having more vehicles than its population.

And it just gets worse.

Data accessed by The Indian Express from the Registering and Licensing Authority of Chandigarh shows that the city is adding 120 cars, motorcycles/scooters vehicles on a daily basis. On an average since 2012, Chandigarh has gone from being City Beautiful, to City Chaotic, having added a total of about 4.70 lakh cars, motorcycles/scooters, without suitably augmenting its roads and infrastructure to cater to the same.

The data further showed that even if the debate for having an alternative mode of transport for the city — like a Metro — had been bounced back and forth between various stakeholders and administrators in the last 10 years, the city has seen the addition of more than 2 lakh cars alone, choking its roads.

The data also revealed how after 2020, the number of car registrations had seen a massive spike, outdoing the number of new scooters/motorcyles being registered.

In 2021, after things started gradually opening up post the Covid lockdown, as many as 20,249 cars were registered in Chandigarh, while just 16,315 motorcycles/scooters got registered, taking the total non transport vehicle registrations to 36,564.

Prior to this period too, the number of motorcycles/scooters being registered has always surpassed the number of four wheeler registration. In 2017, yet again around 46,562 vehicles were registered, of which 18,126 were cars and 28,436 were scooters/motorcycles.

Contacted, the owner of a dealership which deals in second-hand cars said that over the years people had gradually started to lean towards pre-owned vehicles.

“The extreme weather conditions that the city witnesses has had a major role to play in this shift. The scorching heat during summers, heavy rains during monsoons and bitter cold during winters has compelled a lot of people to buy cars and pre owned vehicles come at a pocket-friendly price,” he said.

He added, “Post Covid, people who otherwise car pooled, purchased their own vehicles. The high cost of two wheelers doesn’t work in their favour. A new bike would cost between Rs 60,000 to Rs 90,000. So, instead people add a little more money and buy a second hand car.”

In 2017, in a state environment report, the vehicle density was said to be as high as 878 per 1,000 population and was cited as one of major reasons for the city’s not so good air quality. The Respirable Suspended Particulate Matter (RSPM) in the air was reported to be higher than the permissible limit then, and Sulphur Oxides (SO2), Nitrogen Oxide (N02) were reported to be below the permissible limit — between January 2015 and December 2016. The report then also had cautioned that owing to the steady increase in the number of vehicles every year, the NO2 levels were also rising.

According to a Centre for Science and Environment report in 2018, the use of personal vehicles was the highest in Chandigarh among 14 cities that were analysed on “overall emissions and energy use”, and “per-travel trip emissions”. According to the details of the report, Chandigarh was close to 80 per cent, followed by Lucknow (70 per cent), Ahmedabad (65 per cent) and Jaipur (60 per cent). These numbers were part of a report titled “The Urban Commute”.

The report stated, “Every time, a trip is made in Chandigarh, where the per capita car ownership is the highest, it is likely to have a much worse impact on the environment than in the megacities of Kolkata and Mumbai, which have the best public transport systems in the country. This is worrisome, as Chandigarh is already a Tricity, with Chandigarh-Panchkula-Mohali forming a large urban agglomeration where travel patterns are likely to be similar.”

According to the report, the high car use in Chandigarh reflected in the city’s poor ranking on the per-travel trip emissions. The city was the second worst on this count, with Hyderabad being at the bottom.

It was also stated that in at the current pace, the Tricity “may become an extremely polluted place in the years to come if corrective steps are not taken in time.” On the parameter of total emissions, Chandigarh was at the third position because “it is small in size and has short average trip lengths across all modes”.

“In Chandigarh, the ownership of cars per 1,000 people is among the highest in the country. Cities like this will have to be extremely careful about enabling massive scaling up of sustainable modes,” the report had suggested.