Was Jesus a leftist or a rightist? 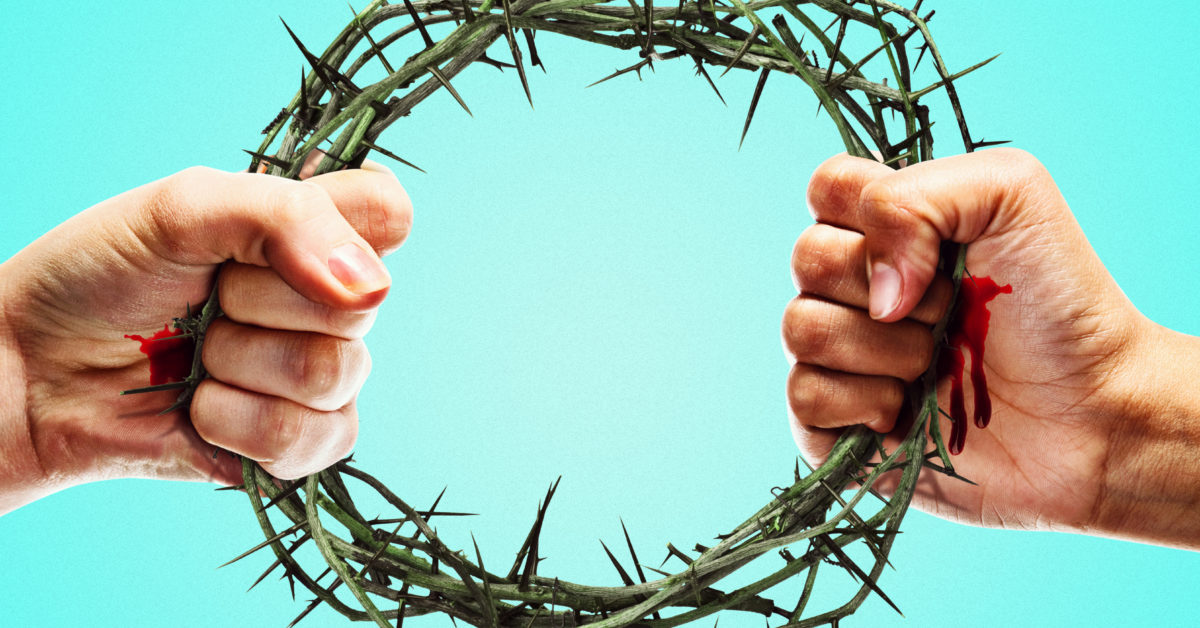 How did Jesus become associated with the right? Â Â Â

He was a sonÂ of refugees who championed the poorÂ and urged his followers not to cast the first stone. But when it comes to the ballot box, Jesus has become the political property ofÂ hard-line conservatives and anti-migration populists less inclined to turn the other cheek than to return asylum seekers back to danger. Â Â Â Â

In Italy, Matteo Salvini,Â the populist leader of the far-right League party,Â routinely usesÂ his ralliesÂ toÂ make public displays of Catholic symbols like kissing the rosary. And Giorgia Meloni, who heads the post-fascist Brothers of ItalyÂ party,Â went viralÂ with a speech in which she shouts, â€œIâ€™m Giorgia. Iâ€™m a woman. Iâ€™m a mother. Iâ€™m Christian.â€Â Â

The trend hasnâ€™t gone unnoticed by the Vatican, which has been quietly pushing back. While theÂ Roman Catholic Church hasnâ€™t backed away from key conservative battles â€” like abortion and traditional family structures â€” on other issuesÂ Pope Francis is taking a pointedly liberal stance (by the standards of his predecessors anyway).Â Â

â€œWho am I to judge,â€ heÂ said once, referring to homosexuality. On migration, he doesnâ€™t miss a chance to urge a more generous approach â€” not shying for instance fromÂ criticizing Trumpâ€™s immigration policyÂ as â€œcruel.â€Â Â

During a trip to Greece earlier this month, Francis may have likened recently withdrawn European Union guidelines on using terms like â€œChristmasâ€ and â€œChristianâ€ to the actions of historic dictatorships. But the main event of his voyage was an address to asylum seekers and officials, in which he called on Europe to take a softer stance on migration and prevent the Mediterranean from becoming â€œa desolate sea of death.â€Â Â

The Pope also seems to have taken the side of U.S. President Joe Biden in a raging debate among U.S. Catholics over whether politicians who support abortion rights should be denied the sacrament. During a meeting in October,Â Francis called the president a â€œgood Catholicâ€ and said he should keep receiving communion, Biden told reporters.Â Â

The point, said Manuel Enrique Barrios Prieto, general secretaryÂ the Commission of the Bishopsâ€™ Conferences of the EU (COMECE),Â is that Jesusâ€™ 2,000-year-old teachings canâ€™t be reduced to political categories that were developed during the French revolution at the end of the 18thÂ century.Â Â Â

â€œThe real issue is to use categories or labels that are more of our times, and of our political discussions, than of the times of Jesus,â€ he said. â€œOur labels, they should not be applied to Jesus.â€Â Â Â

TheÂ Vaticanâ€™s Secretary of State Pietro Parolin offered a similar warning against politicizing God when in September he met the leaders of the center-right European Peopleâ€™s Party (EPP), which includes the Continentâ€™s Christian Democrats.Â Â Â

To Caesar what is Caesarâ€™s

The discussion over Jesusâ€™ place in the realm of earthly politics has been going on since, well, biblical times. Asked by the Roman governor Pontius Pilate whether he was king of the Jews, Jesus replied. â€œMy kingdom is not of this world.â€Â Â

From theÂ Middle Ages toÂ the age of more recent thinkers like Hegel and Nietzsche, the debate over JesusÂ â€œhas created a cultural industry â€¦ that has allowed him to become a paladin of causes of all sorts,â€ said Marco Filoni, a political philosopher at Romeâ€™s Link Campus University.Â Â Â

He agreed that it wasnâ€™t correct to use modern political categories when talking about Jesus â€” â€œin the same way we wouldnâ€™t apply them to other historical figures like Genghis Khan,â€ he said.Â Â Â

It wasÂ mainlyÂ in the modern era that Christianity became tied predominantly to one side of the political spectrum, as Christian Democratic parties in countries like Germany or Italy made a point of representing religious values, while in many cases socialists and communists embraced a secular, often anti-clerical worldview.Â Â

Europeâ€™s more recent upheavals have produced a new cohort of political parties taking up the banner of Christianity as part of identity politics.Â Â Â

TheÂ 2007-2008Â financial crisis and theÂ 2015-2016Â migration crisis created â€œin large sectors of the public opinion a widespread feeling of decline and triggered a mood of fear and suspicion against globalization, liberalism, foreigners â€¦ in short, against the idea itself of an open society,â€ said Iacopo Scaramuzzi, author of a book on how populists have used Christianity.Â Â Â

â€œAll these politicians started pretty suddenly to use ChristianityÂ and Christian symbols in a very instrumental way, in order to reassure their constituency,â€ he added.Â Â Â

The politics of these new movements often has little to do with faith. Populist politicians are rarely devotees; in many cases, they even donâ€™t have a traditional family: Trump and Salvini are divorced; Meloni is an unmarried mother.Â And in Europe at least, their constituencies are getting more secular.Â Â Â

The embrace of religion is often less about faith than nostalgia. They â€œrecognize Christianity as a common language, an aura of tradition, a comfortable memory of a golden past, when there was no European Union, no gay marriage, no Muslims in the city,â€ said Scaramuzzi.Â Â

Whether one believes Jesus was on the right or the left generally depends on where one stands on the political spectrum. AÂ recent studyÂ in the U.S. found that, when it comes to politics,Â man creates GodÂ in his own image rather than the other way around.Â Â Â

Researchers asked respondents to imagine what Jesus would have thought about contemporary issues. Christian Republicans imagined a Jesus who tended to be against wealth redistribution, illegal immigrants, abortion and same-sex marriage; whereas Christian Democrats believed He would have had far more liberal opinions, prioritizing charity toward migrants over, say, opposition to abortion.Â Â

Given the prominence of Europeâ€™s populist parties, it was perhaps inevitable that the clash between religion and politics would eventually make its way to Brussels.Â Â

Late last month, the European Commission withdrew an internal document meant to promote inclusivity. A suggestion to â€œavoid assuming that everyone is Christianâ€ and use phrases like â€œholiday timesâ€ rather than â€œChristmas timeâ€ caught the eye of right-wing politicians and triggered an outcry that forced the Commission into a hasty U-turn.Â Â

The debate over the place of religion in the European project has a long history, albeit one that has traditionally bubbled quietly under the surface.Â Â

The EU includes people of many faiths and not a small number of atheists, andÂ among EU diplomats there are different views on the role of religion in the bloc. One quipped that the key distinction between Europeâ€™s major political movements is that â€œsocialists want government to be god, and ChristianÂ Democrats, god to be government.â€Â Â Â Â Â Â

Much has been made of the fact that the EUâ€™s three pioneers of integration â€” Germanyâ€™s Konrad Adenauer, Franceâ€™s Robert Schuman and Italyâ€™s Alcide De Gasperi â€” were all born in regions close to a national border.Â Equally notable is that all three were devout Catholics. (Last summer, Pope Francis put SchumanÂ on the path to sainthood.)Â Â

â€œFor Adenauer, as well as for Robert Schuman, Alcide De Gasperi â€¦ there was no doubt that the European Union had to first and foremost be a community of values,â€ saidÂ Marijana Petir, a Croatian center-right MP who graduated from theÂ Faculty of Catholic Theology in Zagreb.Â Â Â

But while some left-wingers saw EU integration as a Catholic plot (â€œThe Church has made a triple alliance: Schuman, Adenauer, De Gasperi, three tonsures under one skullcap,â€ said the mid-20th-century Socialist French President Vincent Auriol), the European Union has been for the most part a secular institution.Â Â

Indeed, when EU negotiators drafted a proposed constitutionÂ in 2002-2003, an effort to insert language referring to Christianity was shot down by the socialists, with France and Belgium playing a leading role.Â Â

These days, for the Vatican at least, the bigger concern is not to inject religion into secular politics, but to keep the political battles over identity out of matters of faith.Â

â€œWe have a rise of populism in Europe, this is true,â€ said Barrios Prieto of the Brussels Bishopsâ€™ Conferences. â€œIt is true, maybe that some Catholics donâ€™t feel well represented by traditional parties. But what is also very important is the question of identity â€¦ We have to avoid seeing Christian identity in confrontation with others.â€Â