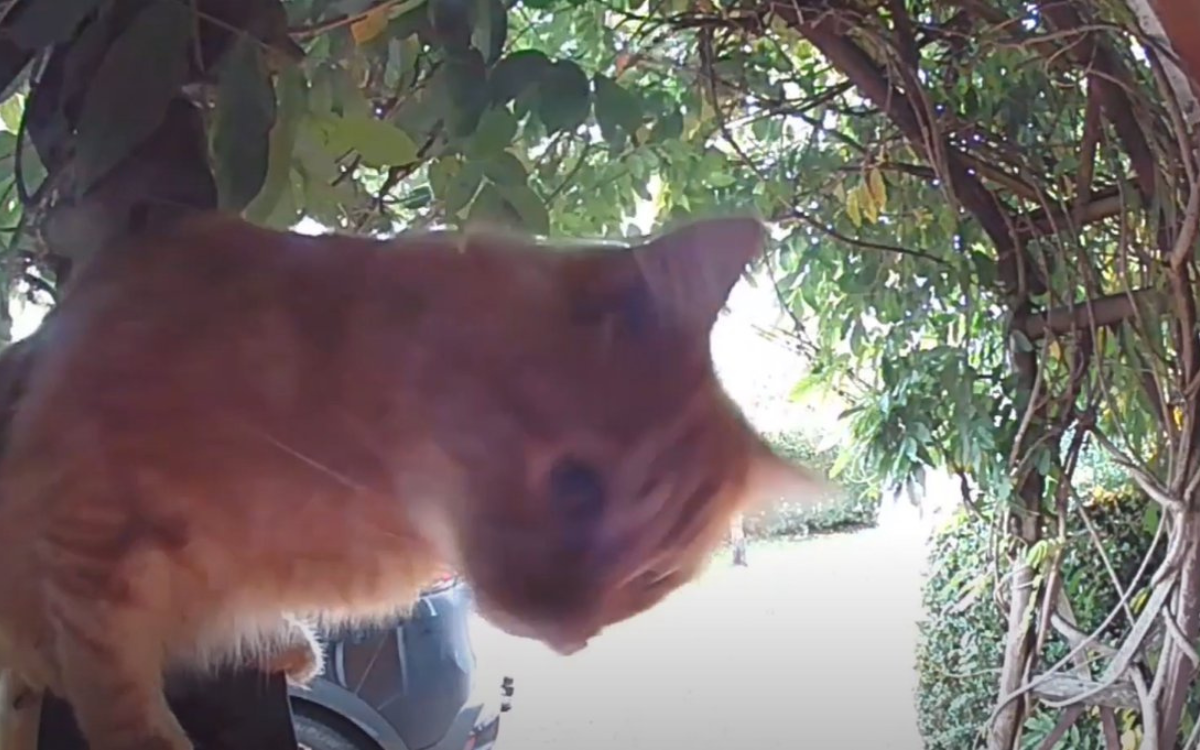 An ingenious cat has worked out how to alert his owner that he is outside and wants to come in using their video doorbell.

Izzy, a long-haired male ginger from Norfolk in England, U.K., was captured on his owner Amanda’s Ring video doorbell, letting her know he wanted to come inside the house.

In a clip shared by the cat’s owner, Izzy can be seen climbing the wisteria archway outside his human companion’s home before moving around to signal he’s waiting.

Perching on the letterbox, eight-month-old Izzy then begins to meow and has a brief conversation with Amanda via the device’s two-way talk feature.

It’s clear Izzy has a close relationship with his owner as demonstrated in the way he responds to the sound of her voice.

Earlier this year, a study conducted by researchers from Paris Nanterre University highlighted how cats respond differently to the sound of their owner’s voice compared with that of a stranger.

The experiment observed 16 cats listening to pre-recorded sentences, spoken first by their owner and then by a stranger. The researchers examined how the cats changed their behavior in response to hearing the voices. For example, whether their ears or tails moved, their pupils dilated, or they suddenly stopped what they were doing.

Interestingly, they found that the cats remained largely unresponsive when hearing a stranger’s voice. However, 10 of the 16 cats studied demonstrated indicators of increased attentiveness when hearing their owner’s voice.

The research, which was published in the journal Animal Cognition, adds further weight to the idea that cats place more importance on the bonds formed with their owners than previously thought.

Izzy certainly appears to have a keen understanding of his owner if the footage provided by Ring is to be believed.

In the clip, Izzy can be seen standing close to the camera when his owner, Amanda, asks through it: “Who is there?” before letting out a few meows to get her cat’s attention. Izzy soon responds, emitting a “meow” or two of her own as the pair engage in something approaching a conversation.

“I’m here,” Amanda can be heard saying as Izzy continues to sniff around. “Do you want to come in?” she asks. The answer is definitely yes, confirmed by Izzy’s subsequent meows.

The footage is a testament to Izzy being one very smart cat. He appears to have deduced that Amanda is alerted when someone comes near the door, something attributed to the Ring camera‘s advanced motion detection feature.

In any case, Izzy has clocked how to take full advantage of this and hop back indoors. According to Amanda, this is no fluke either. Izzy has positioned himself in front of the doorbell multiple times and often makes it obvious when he wants to come in with his meows.

Do you have funny and adorable videos or pictures of your pet you want to share? Send them to life@newsweek.com with some details about your best friend and they could appear in our Pet of the Week lineup.