We are working to fight terrorism, naxalism and corruption: PM Modi 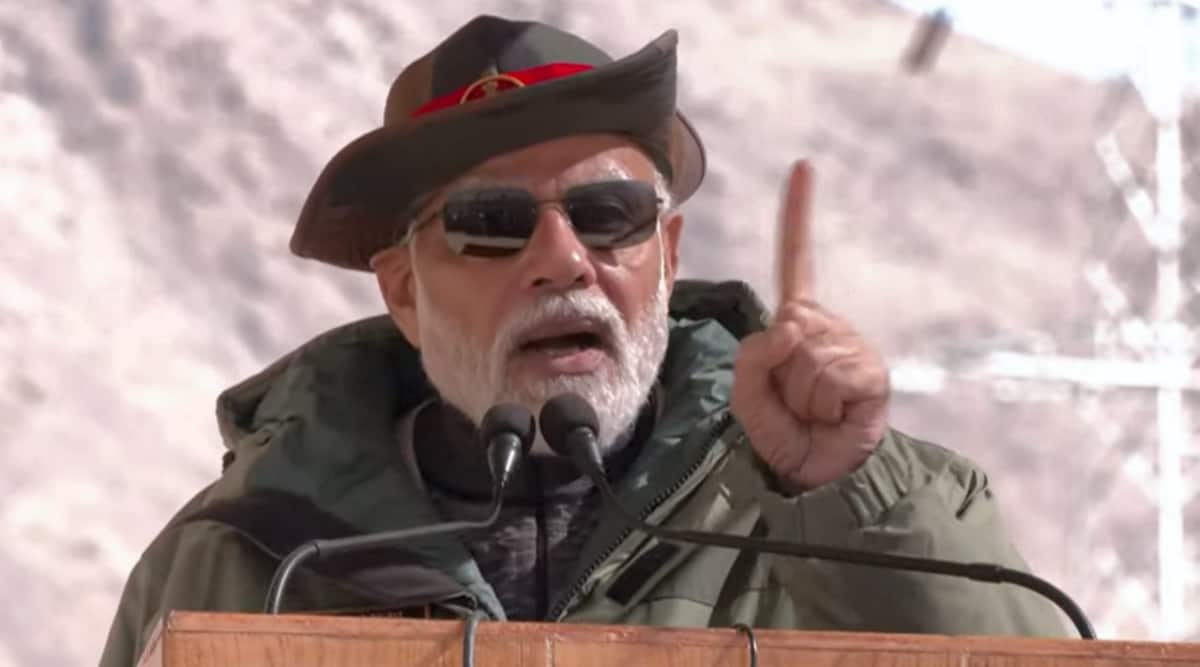 DESCRIBING Diwali as a “festival of the end of terror”, Prime Minister Narendra Modi Monday offered greetings to the people from the “victorious lands of Kargil” where the Indian “army crushed the fangs of terror”.

“Diwali means the festival of the end of terror… Kargil had also done the same. In Kargil, our army crushed the fangs of terror and the country had celebrated Diwali in a style which is remembered even today,” he told soldiers.

Prime Minister Modi arrived in Kargil Monday morning to continue with his tradition of spending time with soldiers on the country’s borders. He has been regularly visiting the frontier areas on Diwali since 2014 when he celebrated Diwali with soldiers at Siachen in Ladakh.

“For years, you have been my family. The sweetness of Diwali is enhanced when I am amongst you… On one side, there are the sovereign borders of the nation and on the other committed soldiers. On one, we have the love of the soil of the motherland, and on the other, brave-heart jawans. I could not have expected a Diwali of such magnitude anywhere else… Today, from the victorious lands of Kargil, I wish a very happy Diwali to everyone in India and the world,” he said.

The Prime Minister said Kargil was the shining proof of the bravery of Indian army. “Dras, Batalik and Tiger Hill are proof that enemies sitting on the heights of mountains were dwarfed before the courage and valour of the Indian Armed Forces,” he said referring to the Kargil war in 1999.

“A country is secure only when its borders are secure, its economy is robust, and the society is filled with self-confidence,” Modi said. “Just like you are protecting the borders, we are working to fight terrorism, Naxalism and corruption. The scope of Naxalism that had once engulfed a large part of the country is continuously shrinking. The country is fighting a decisive war against corruption. No matter how powerful the corrupt may be, they cannot escape the law,” he said.

Thanking the soldiers for preserving his photographs when he visited Kargil with some relief material, he said, “As an ordinary citizen, my kartavya path had led me to the battlefield.I had come to drop off the supplies put together by the countrymen. It was a moment of worship for me.”

The Prime Minister said war is the last option but peace is not possible without strength. “We follow a tradition where war is considered as the last option. India is always in favour of world peace. We are against war, but peace is not possible without strength… Our army has the capability and the strategy, and if someone looks at us, then our army also knows how to give a befitting reply to the enemy in their own language.”

Modi said the most important achievements for the country’s security is the Armed Forces’ modern weapons built under the Atmanirbhar Bharat. “All the three sections of defence have decided to minimise our dependence on foreign weapons and systems, and pledged to be self-reliant,” he said. “I admire our three armies, which have decided that more than 400 pieces of defence equipment will no longer be bought from abroad, and will now be made in India. When the jawans of India fight with the weapons made in the country, their faith will be at its peak and their attacks will come with a surprise element, crushing the enemy’s morale,” the Prime Minister said.