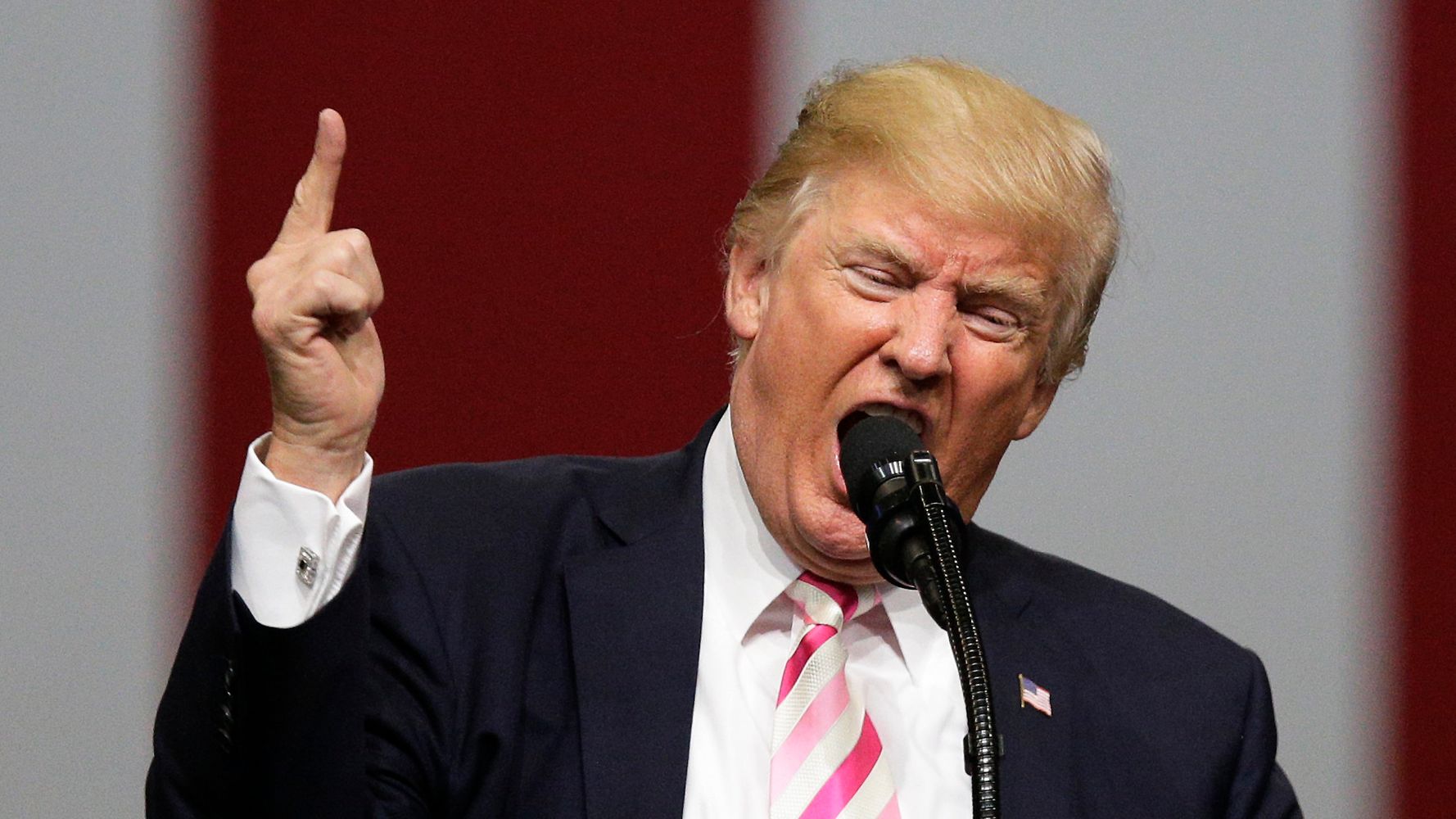 When Harvard professors Steven Levitsky and Daniel Ziblatt sounded the alarm two years ago that President Donald Trump posed a threat to American democracy, some critics treated their fears as absurd.Â

Over the past two months, with his poll numbers dropping and his reelection in jeopardy, Trump has ramped up the broad assaults on Americaâ€™s democratic institutions that have defined his presidency. And while some fear what he could do post-election, heâ€™s done plenty beforehand to undermine democracy as a whole.Â

Trump approached the coronavirus pandemic like a paranoid conspiracyÂ that threatens his political prospects rather than the public health crisis it is. He unleashed often-unidentified federal agents to crack down on anti-racist protests, whose existence he has used to try to stoke the grievances of his largely white base by painting the demonstrators as an unruly mob that threatens â€œlaw and order.â€ He sought to delegitimize the very existence of his political opponents and undermine an election he fears he wonâ€™t win, even turning the federal bureaucracy into a tool of his reelection campaign.Â

The consequences are plenty: Amid the presidentâ€™s attempts to sow chaos and violence in the streets, three people were killed during protests in late August. Amid his efforts to foster distrust in the elections, nearly half of Americans have said in recent polls that they do not believe Novemberâ€™s voting will be conducted freely and fairly â€• a dramatic increase from just two and four years ago.

Now, a growing number of political scholars, political leaders and other officials are warning that 2020 is a referendum not just on Trump but on the nationâ€™s democratic experiment as a whole. Still, Levitsky worries that not enough of us are as concerned as we should be.Â

â€œPeople are getting killed over politics. Thereâ€™s questions about whether the election will be free. Law enforcement bodies are being manipulated to protect allies of the president and go after rivals of the president,â€ Levitsky said. â€œThings are happening on various fronts, and weâ€™re not putting it all together and realizing that our democracy is on the line.â€

The United States has never been a perfect democracy, and its 250-year history is viewed best as a slow march toward democratization with a major step in 1965 when the passage of the Voting Rights Act aimed to fully enfranchise Black citizens for the first time. But the trend toward a more free and fair society has made it easy for many Americans â€• especially white Americans â€• to ignore how easy it would be for this democracy to fall apart.Â

When Trump won in 2016, there was a general belief among experts that while he would test U.S. democracy (and certainly make the United States even less democratic for Black people, immigrants and other racial and ethnic minorities), he likely wouldnâ€™t lay waste to it entirely. American institutions were too strong, the theory went, for a single leader to totally destroy them. There were enough constraints to limit how much damage could be done. Trump-like leaders in younger, less established democracies, particularly Jair Bolsonaro in Brazil, seemed like much more immediate threats.Â

Four years later, itâ€™s clear that view was too charitable. Thatâ€™s because instead of serving as constraints on presidential power, Republicans in Congress have done whatever they can to protect Trump. They blocked his removal from office after House Democrats impeached him and have kept administration officials from facing consequences for shirking their oversight duties.Â

Without those checks, Trump has proceeded to do whatever he wants: fire inspectors general, attack the judiciary, violate laws, and profit off his own office.Â

Owing largely to the GOPâ€™s animosity toward checks and balances that might rein in Trump, â€œU.S. democracy has proven weaker and more vulnerable than I thought,â€ Levitsky said.

That has turned the Trump era into a case study on how modern democracies fall apart: not through a violent and sudden rupture, but by the chipping away at institutions until a full democracy doesnâ€™t exist anymore. Political scientists call these â€œhybrid regimesâ€ â€• nations that often still look like democracies on the surface, and even initially maintain many of the civil and constitutional rights of democratic countries, but function in a more authoritarian manner institutionally.

â€œ[In] old-school authoritarianism, you could tell a country was authoritarian because it didnâ€™t have a democratic system,â€ said Amy Erica Smith, a political scientist at Iowa State University. A hybrid regime, though, â€œhas all the trappings of a democracy,â€ Smith said, â€œbut it doesnâ€™t work like a democracy.â€

Trumpâ€™s attacks on democracyÂ are in effect the final shattering of the idea of American exceptionalism.

Of all of Trumpâ€™s authoritarian moves as president, itâ€™s his approach to the 2020 election that serves as the clearest signal that America is on the brink of an institutional democratic crisis, and on the verge of becoming the sort of hybrid regime that Vladimir Putin created in Russia or that Viktor Orban put in place in Hungary.

â€œThe number one defining feature of a hybrid regime is that the incumbent is using â€• and Iâ€™ll say â€˜hisâ€™ because almost always â€˜hisâ€™ â€• all of the benefits that come from office to get himself reelected in an unfair way,â€ Smith said.Â

Trump is doing just that, and not merely through his efforts to undermine the U.S. Postal Service and discredit the election as fraudulent before it even takes place (an admittedly odd tactic for a leader already in power).Â

In late August, the Office of the Director of National Intelligence decided that it would no longer brief Congress directly on potential threats to election security. This week, a whistleblower from the Department of Homeland Security â€• the agency Trump has further weaponized to carry out his immigration crackdowns and target anti-racist protesters across the country â€• alleged that the administration has repeatedly tried to alter intelligence reports to downplay the threat of white supremacist groups and paint antifa as a terrorist mob. Under Attorney General William Barr, the Department of Justice has mobilized in support of the president, intervening in lawsuits filed against him and attempting to oust U.S. attorneys whose investigations, the president fears, may hit too close to home.Â

In the countdown to the election, Trump and the GOP have intensified their efforts to run rampant over legal and institutional constraints on the presidency. The Republican National Convention was a four-day thumbing of the nose at the rule of law and democratic norms. Secretary of State Mike Pompeo, who has helped Trump turn the State Department into yet another blatant electoral tool, delivered a speech that likely breached department protocol and potentiallyÂ ran afoul of the Hatch Act, which prohibits federal employees from engaging in partisan political activities while they are effectively on the job. A night later, Trump accepted the GOP nomination in a ceremony held on the White House lawn, a moment of clear disdain for the law by the president and an even more explicit potential breach of itÂ by others.

Voters might not care about an obscure federal statute, but â€œthe violation of the Hatch Act is incredibly significant for U.S. democracy,â€ Smith said, â€œbecause the Hatch Act gets to the heart of protecting democracy from one of the players systematically stacking the deck.â€Â

Itâ€™s that sort of flouting of the law that has helped drive assessments of U.S. democracy to a new low point among political scientists surveyed by Bright Line Watch, an outfit that began gauging expert opinion on the subject in 2017.

The 2016 election, Levitsky said, was a sign that too many Americans had â€œgotten to the point where we take our democracy for granted, meaning that no matter how reckless we are, we believe we canâ€™t break our democracy.â€

Trumpâ€™s attacks on democracy are in effect the final shattering of the idea of American exceptionalism. Many nations cycle through democratic and authoritarian regimes. For most of its history, the U.S. looked to experts like an outlier â€• a country that could slowly but steadily democratize without major authoritarian reversions. But under the argument that the U.S. wasnâ€™t a full democracy until the passage of the Voting Rights Act, the country is actually â€œright on timeâ€ for the sort of authoritarian turn that has taken place in other nations that democratized in the 20th century, Smith said.Â

Never has it been clearer that Trump and the GOP are trying to make it happen here now. The next two months will determine whether their efforts work.

We want to know what youâ€™re hearing on the ground from the candidates. If you get any interesting â€• or suspicious! â€• campaign mailers, robocalls or hear anything else you think we should know about, email us at scoops@huffpost.com.