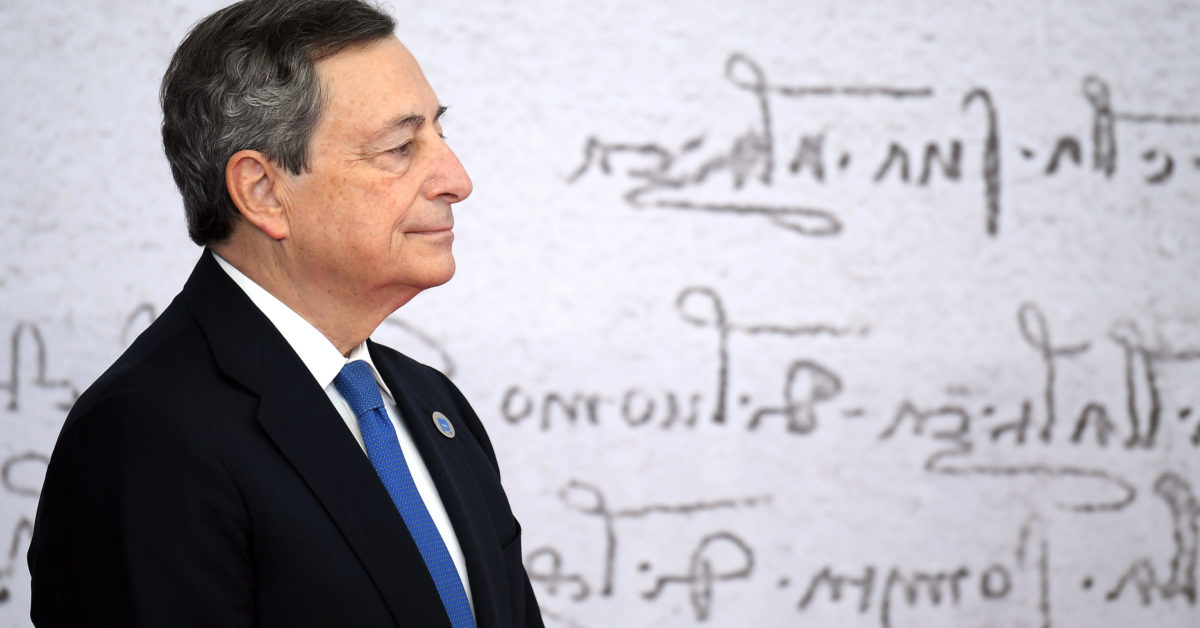 ROME â€” Last month, a group of university professors, human rights activists, politicians and public intellectuals gathered at the Norman Palace in Palermo, seat of Sicilyâ€™s regional parliament, for a conference titled â€œDemocracy to Dictatorship, the role of memory.â€Â

The real subject of their gathering: Mario Draghi. Â

Those attending the debate, which compared COVID-19 regulations in todayâ€™s Italy to the totalitarian states of the 1930s, were united in what is so far a minority opinion in Italy: opposition to the prime minister, and what they describe as his increasingly authoritarian behavior. Â

While polls currently put the prime ministerâ€™s approval rating at 65-70 percent, with the majority of Italians trusting his personal credibility and capability to unlock European funds and manage the pandemic, a minority resistance group in Italyâ€” made up of liberals and intellectuals â€” are increasingly expressing concerns about the countryâ€™s decline of democratic rights.Â

Chief among their complaints is Draghiâ€™s vaccination rules â€” among the strictest of any democracy. All workers in Italy must either have a digital health passport, known as a green pass, proving vaccination or a negative test every two days â€” which amounts to â‚¬150 a month. Those who refuse are suspended from work without pay.Â

The conference organizer, Gandolfo Dominici, a professor of marketing at Palermo University with an ear for soundbites, has rebaptized Italy â€œDraghistanâ€ in light of these developments, a name that protesters and opposition politicians have since appropriated as an internet meme and hashtag. Â

Dominici told POLITICO that the word was meant to allude to Turkmenistan, one of the only countries with mandatory vaccines, and Afghanistan, because forcing people to receive vaccines amounts to a theocracy. â€œWe are clearly living in a totalitarian regime,â€ he said.Â

Dominici also organized a petition that has since been signed by more than 1,000 university professors and researchers who insist they are not against vaccines, but they reject the green pass as unconstitutional, discriminatory and divisive.Â

One of its signatories, prominent historian Alessandro Barbero, has argued that the government should be upfront about what is effectively mandatory vaccination instead of â€œblackmailingâ€ its citizens. â€œThey say, â€˜the vaccine is not mandatory, itâ€™s just that if you donâ€™t have it, you canâ€™t live, you canâ€™t go to work or university.â€™ Dante would have been able to fill the circle of hypocrites in hell with politicians from today,â€ said Barbero at a festival in Florence.Â

Giuseppe Cataldi, a professor of international law at the University of Napoli Lâ€™Orientale and a human rights expert said: â€œIf a worker doesnâ€™t want to get vaccinated, and at least formally retains the right to not get vaccinated, but in the end is forced to because he supports his family and cannot spend 10 percent of his salary on tests, thatâ€™s not okay.â€Â

Some of the petitioners claim that making people pay for tests to be able to work is incompatible with Italyâ€™s constitution, which begins, â€œItaly is a democratic Republic founded on labor.â€Â

â€œThe constitutional right to work cannot be dependent on having a certificate of obedience to the government,â€ said Dominici.Â

Daniele Trabucco, a constitutional law professor who also signed the petition, argues that by creating an indirect obligation instead of legislating to enforce vaccination, the government has â€œsurreptitiously bypassed the constitution.â€Â

Beyond the vaccine passport, philosophers and intellectuals have also begun to express concerns at the chilling effect that the governmentâ€™s modus operandi is having on democracy â€” in particular, the practice of governing by decree, the prolonged state of emergency, the disregard for minority rights and the silencing of dissent.Â

In the city of Trieste, established as the capital of the resistance against the green pass by striking port workers, protests have been banned for the rest of the year. In universities â€” by definition institutions meant for the exchange of views â€” groupthink has taken over, according to these academics, with anyone who speaks out about their concerns getting canceled or demonized as anti-vaxxers on social media.Â

Interestingly, at the heart of many of these concerns is Draghi specifically.Â

Given the twin economic and health crises, it is natural that citizens have turned to a strong, capable leader. But in the rebelsâ€™ view, people need to be made aware that Draghiâ€™s leadership, while providing reassurance, has also resulted in the concentration of power under a single individual and the sidelining of parties and parliament. Â

Since World War II, Italyâ€™s proportional representation electoral system has led to a succession of short-lived and unstable governments, with unelected technocrats, like Draghi, regularly called in for the rescue.Â

In contrast to his predecessor, Giuseppe Conte, who frequently negotiated between the governing parties, Draghi has made decisions independently right from the beginning. He didnâ€™t even check with the parties when determining the composition of his government, instead choosing his ministers with the approval of President Sergio Mattarella.Â

Additionally, Draghiâ€™s large majority, coupled with the personal authority that results from his distinguished career, means that ministers are reluctant to challenge him, even when he dismantles flagship policies. Â

This grand coalition with almost everyone inside the government tent â€œstrangles debate,â€ Cataldi said, and leaves no space for those who think differently. The parties have struggled to get their messages across to voters, leading to leadership shake-ups in both the Democratic Party and the 5Stars since Draghi took power. Parliament has been reduced to a role of approving decrees made by the executive. â€œItâ€™s like a notary who stamps decisions taken elsewhere.â€Â

Philosopher Giorgio Agamben is among the more alarmist critics â€” his work has long focused on biopolitics and the negation of rights during states of exception, including the creation of institutions like Guantanamo Bay Detention Camp. Â He was widely criticized last year for suggesting the pandemic was a convenient invention by the government. Last month, he addressed the Senateâ€™s Constitutional Affairs Commission, claiming the vaccine passport was a tool for greater state surveillance. Â

Others are more measured in their criticism. While recognizing the need for emergency government actions during a pandemic, they have been asking how long it is justifiable and necessary to suspend democratic freedoms.Â Â

Philosopher Massimo Cacciari, a former mayor of Venice, has observed that successive emergencies â€” terrorism, economic crisis and immigration â€” have provided justification for governments to be appointed by the president rather than chosen by the electorate. The pandemic has exacerbated this situation, â€œespecially in Italy,â€ which had an unusually strict lockdown and was the first one to require vaccination to work,â€ he said. And though the pandemic has generally strengthened incumbent governments, a leader of â€œgreat authorityâ€ such as Draghi is likely to strengthen the executive office further.

While the official state of emergency, which was declared by the government on January 31, 2020, cannotÂ be extended beyond two years, the government is already signaling it intends to extend it, which would likely mean declaring that a new, different emergency, therefore restarting the clock.Â

For Cataldi, there is little doubt the government will be able to find an excuse to do so. â€œIf cases go up, they can say we havenâ€™t reached 90 percent vaccinations, we havenâ€™t got herd immunity, we havenâ€™t defeated the virus . . . But we in the [academics] group believe we canâ€™t go on like this in a democratic country, we are not Turkey in a dictatorship.â€ (Ironically, in April, Draghi himself accused Turkish President Recep Tayyip ErdoÄŸan, of being a dictator.)Â

The counterview to all of these concerns is that in any democracy, rights are not absolute and have to be weighed against the rights and interests of others. Carla Bassu, an associate professor at the University of Sassari and expert in constitutional law, maintains that the green pass is â€œentirely compatibleâ€ with the constitution.Â

â€œThe constitution is not only founded on the right to work but on rights such as solidarity and equality,â€ she said. â€œThe green pass is not a tool for punishment, itâ€™s a tool to care for public health in the collective interest.â€Â

To compare Italy to an authoritarian state â€œis offensive,â€ she added. Authoritarian states target the identity of a person, such as ethnicity, race, sex and ability, whereas the green pass is not discriminatory. It is a prerequisite like a driving license, to keep others safer.Â

Of course, democracy remains a minority concern when things are going well.Â

As the economy looks set to grow by up to 7 percent this year, the vast majority of Italians shrug their shoulders at these alleged threats. Draghi has already secured cross-party agreement for reforms with a mere wave of his pen and approval from the EU for Italyâ€™s economic plan, unlocking billions in EU money for investment, tax cuts and thousands of jobs. But how will this play out in the months to come?Â

In January, MPs must vote for a new Italian president, and Mattarella could â€” if he can be persuaded to stay on,Â  â€” guarantee the continuity of Draghiâ€™s government and Italyâ€™s longed-for recovery until elections in 2023. Some, including the Democratsâ€™ Andrea Marcucci and centrist Carlo Calenda, have even suggested Draghi lead another government coalition following the 2023 elections.Â

However, if Mattarella declines, as seems almost certain, Draghi himself is the most likely candidate for president and could potentially appoint a new prime minister in his own image, such as Minister of Economy and Finance Daniele Franco.Â

The good news is that as the rate of those over 12 years of age who have received at least one dose of the vaccine approaches 90 percent and new COVID-19 cases remain far below many other European countries, Italy is in a better position than many to avoid severe lockdowns, which would damage the economy.Â

For many Italians, Draghistan, notwithstanding its vociferous critics, is likely to appear as the best hope in overcoming the countryâ€™s long-term crises and finally setting it on a steady path of recovery and growth. Â