What makes Justin Jefferson and 8-1 Minnesota Vikings the hottest team in the NFL? 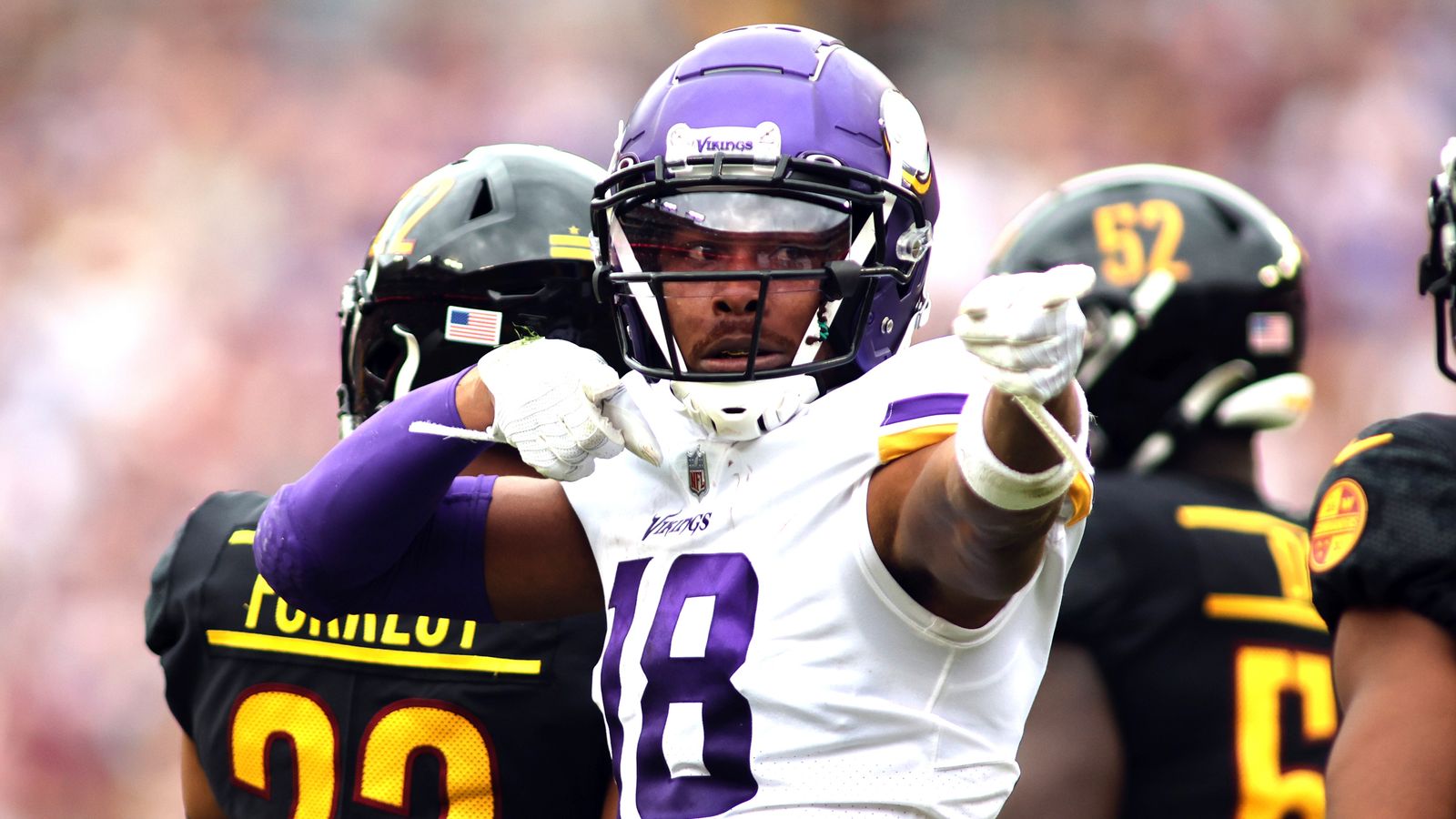 As the Philadelphia Eagles’ unbeaten streak came to an end last Monday night, one team stood out as the hottest team in football.

The Minnesota Vikings, whose only loss in the year came to those Eagles in Week Two, now boast the longest win streak in the NFL (seven straight) and last week, they produced a true ‘statement’ win by heading into Buffalo and beating the Bills in the game of the season so far.

That overtime victory showed everything the Vikes are about and where they excel. Dalvin Cook scored on an 81-yard run. The defense held up when they needed to and produced big plays in huge moments. The NFL’s best wide receiver right now – Justin Jefferson – had an individual performance that will go down in history.

Minnesota’s credentials were questioned every week as they beat ‘inferior’ teams but their massive victory in Buffalo showed they should be taken seriously as Super Bowl contenders.

At 8-1 and with all the confidence in the world, are Minnesota the NFL’s team to beat?

We have to start here… We are watching greatness in the form of Minnesota’s 23-year-old, third-year wideout. It is simply stunning, and every week he does something that blows your mind.

Against Buffalo, his fourth-and-18 leaping, one-handed grab drew comparisons to Odell Beckham’s all-timer and will go down as one of the greatest catches in recent memory.

Following Jefferson’s superb catch against the Buffalo Bills last week, just how does it compare to OBJ’s infamous grab against the Dallas Cowboys back in 2014?

Following Jefferson’s superb catch against the Buffalo Bills last week, just how does it compare to OBJ’s infamous grab against the Dallas Cowboys back in 2014?

What might have been lost in the reaction to the crazy ending in Buffalo was that Jefferson managed a career-high 193 yards on 10 catches. And according to Next Gen Stats, nine of those 10 had a sub-50 per cent completion probability – the most in any game since that stat was recorded.

When you watch them all individually, you can see the degree of difficulty:

Watch every Jefferson catch from his career-high 193-yard game

Watch every Jefferson catch from his career-high 193-yard game

For two years, Jefferson has been a Pro Bowler and second-team All-Pro, but even then he has felt underrated and underappreciated as the Vikings slipped to 7-9 and 8-9 records and missed the playoffs.

This season, he leads the league in yards per game (117.8), is fourth in the league in catches, and is making winning play after winning play. Every defensive back and defensive coordinator on Minnesota’s upcoming schedule will be sweating over how to stop him.

During the week, Pro Football Talk’s Mike Florio said: “Justin Jefferson is just amazing. And [the buzz] has kind of been quiet because the Vikings weren’t winning. There was this aura of dysfunction, so you didn’t really get to appreciate Jefferson.

“I remember there was a moment late last year where I thought, ‘if this keeps up, he is going to do the Stefon Diggs-style tweet-my-way-out-of-town thing’. And I wouldn’t have blamed him.

“But that all changed with the Kevin O’Connell regime and what they’ve done this year. It has been magical; it’s the Minneapolis Miracle extended over the course of several weeks, culminating in what we saw in Buffalo.”

After much success with the Vikings over eight seasons in charge, previous head coach Mike Zimmer’s time with the organisation came to an end last summer. Two straight losing seasons and rumblings of players feeling unhappy with his ‘tough’ coaching style meant his tenure had reached its natural end.

But as so often happens in this league, the team went for his opposite. Instead of a hard-nosed, old-school, defensive-minded veteran, the Vikings chose O’Connell – young (37), personable, and one of the most exciting offensive minds in the NFL.

The offensive isn’t setting any records, but they are getting the ball to Jefferson – often. Running back Dalvin Cook is averaging five yards per carry on the ground. It is early for new tight end TJ Hockenson (acquired at the trade deadline), yet he has still had 19 targets and 16 catches in two weeks with the team.

The Vikings can attack you in multiple ways, and they didn’t lose their defensive prowess when they lost Zimmer either. O’Connell chose 65-year-old defensive coordinator Ed Donatell to lead his group, who has genuinely been coaching since before his head coach was born. Donatell brought 31 years of NFL experience to Minnesota (11 more in college).

Despite giving up more yards per game than just three other teams, the Vikings take risks and force turnovers – they are second to only the Eagles in takeaways with 18. If you can’t stop the other team, just get the ball back instead.

How far will they go?

So, they have won seven straight. They have just beaten many analysts’ Super Bowl favourites. Will they go all the way?

The elephant in the room is, of course, quarterback Kirk Cousins. One of the most polarising QBs in the game, he entered the season with a telling 59-59-2 record as a starter.

You may say quarterback wins are not a stat. This may be true, and despite his team’s records, he has put up some tremendous numbers, especially as a Viking. He averaged over 4,000 yards, 31 touchdowns, nine interceptions and a 68.3 completion percentage in the last four seasons, with a 103.5 quarterback rating.

However, through nine games this year, he is looking at his lowest completion percentage (64.1), touchdown percentage (4.0 – 14 TDs) and quarterback rating (87.0) since he became a full-time starter in 2015.

Is that a worry? Or is that 8-1 record all that matters?

Ultimately, when we reach the postseason, the Vikings will need ‘winning’ Kirk Cousins, whatever the stats say.

After their Buffalo win, Jefferson said: “I told everybody, this means this is our season – for us to win out and go to the Super Bowl.

“We’ve just got to keep working, take it on week by week, fix our mistakes and get ready for the Cowboys.”

Florio, again on Pro Football Talk, said: “When you develop the knack for doing what they’ve been doing late in these games, you develop a belief among your players and your sideline that it’s going to happen.

“How can anyone of sound mind not watch that game and come away thinking, ‘it’s their year’?”

Minnesota’s year continues when they host Dallas on Sunday at 9.15pm, live on Sky Sports. Will they keep the winning streak alive?