What â€˜Sofagateâ€™ says about Charles Michel 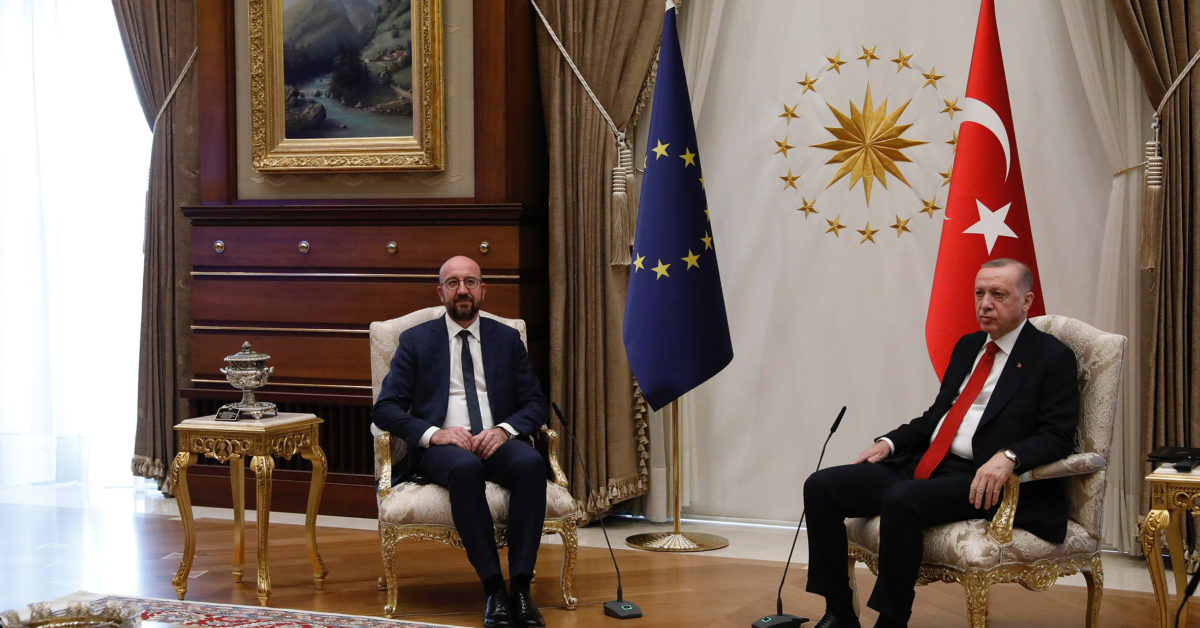 One of the most striking features of Charles Michelâ€™s presidency of the European Council thus far is his activism in foreign affairs. More than his predecessors, he is testing what leeway the European Unionâ€™s treaties give the Council president to shape its foreign policy.

That he should do so is not surprising, given his track record when he was Belgiumâ€™s prime minister and before that minister for international development. But yesterday, while on a trip to Turkey to see President Recep Tayyip ErdoÄŸan, Michelâ€™s pretensions to the status of international statesman curled up and died.

What POLITICOâ€™s Brussels Playbook dubbed â€œSofagateâ€ â€” the moment when European Commission President Ursula von der Leyen discovered that she had been blanked in the seating arrangements â€” exposed Michel as a lightweight. There are few axioms in politics as old as â€œdivide and ruleâ€ (or divide et impera as it used to be in an ancient language), but Michel looked as if it was a new one on him.

What might and should have been an occasion for EU solidarity â€” Michel and von der Leyen were, after all, on a joint trip to follow up on a joint statement of policy towards Turkey â€” instead became one of those all-too-familiar moments when the EU is defeated by inter-institutional rivalry and amour propre.

Only the most Panglossian international negotiator would expect the best of ErdoÄŸan, who has been playing off different parts of the EU against each other for the best part of two decades. And there are plenty of reasons Michel should have known better.

During the migration crisis in 2015-2016, when Michel was prime minister of Belgium and therefore a member of the European Council, he witnessed the Turkish president outmaneuver the Council and Commission. With German Chancellor Angela Merkel desperately seeking a deal to stem the flow of migrants crossing the eastern Mediterranean, ErdoÄŸan threatened the then Council and Commission presidents â€” Donald Tusk and Jean-Claude Juncker â€” that he would unleash busloads of refugees toward Greece and Bulgaria.

So, although ErdoÄŸan may have been the instigator of yesterdayâ€™s diplomatic slight, Michel has no excuse for not being on his guard. He was under no obligation to play the diplomatic game of musical chairs, nor to cling to ErdoÄŸan and not stand up â€” literally â€” for von der Leyen.

Behind the scenes in the EU institutions, an inquiry will be under way into how this diplomatic incident ever happened. What were the failures of preparation, the lack of attention to procedure and protocol? If it is a clichÃ© of the diplomatic trade that â€œprotocol is politics,â€ how is that the seating arrangements were apparently not discussed, as Playbook reported?

The inquiry may well be embarrassing for the EUâ€™s ambassador to Turkey, Nikolaus Meyer-Landrut, a German diplomat who was an adviser to Merkel from 2011 to 2015 and Germanyâ€™s ambassador to France from 2015 to 2020. The irony will not be lost on von der Leyen, who was previously Germanyâ€™s defense minister, that her humiliation might have been averted by a German diplomat.

But what happens behind the scenes is probably less important than what was made public yesterday: Michelâ€™s lack of judgement. A politician who trumpets his liberal values was left looking at best ungallant, a faux feminist, a collaborator with the illiberal ErdoÄŸan.

What makes Sofagate deeply damaging for Michel is that it is not about the niceties of protocol alone â€” it cannot be dismissed as a storm over diplomatic canapÃ©s. The deliberately humiliating treatment of von der Leyen comes just weeks after the EU condemned Turkey for pulling out of the Istanbul Convention â€” an international human rights treaty on preventing violence against women. If the EU is serious about demanding Turkey respect the rights of women, then Michel cannot be conniving in the humiliation of the woman who is president of the European Commission.

Protocol, politics and policy are not separable. The visit by EU leaders to Turkey this week was a revelatory moment â€” and it did not cast Michel in a good light.

CORRECTION: A previous version of this article misspelled the Turkish presidentâ€™s name.