What We Know About The Colorado Springs Club Q Shooter 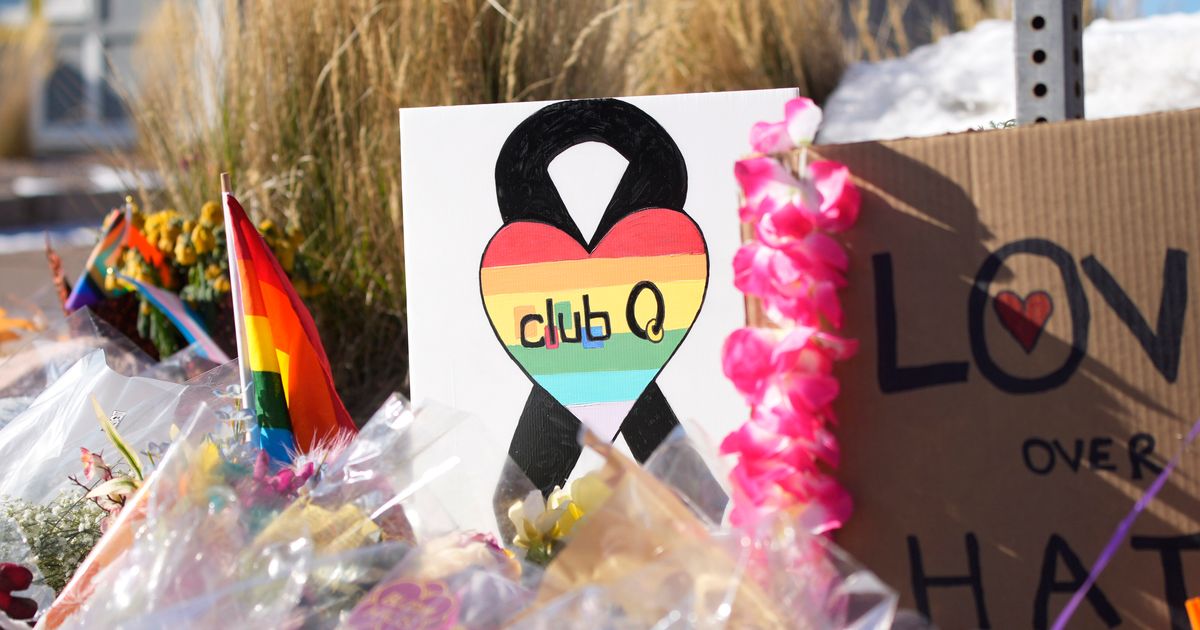 Police and reporters are beginning to learn more about the suspect in the mass shooting at Club Q, a gay nightclub in Colorado Springs, on Saturday night that left at least five people dead and many more injured.

Information on Aldrich is sparse and investigators haven’t released a mug shot or investigatory details, nor have they responded to questions about Aldrich’s past, including a potential confrontation with law enforcement over an alleged bomb threat last year.

Online court records show that prosecutors successfully petitioned a state judge on Sunday to seal the suspect’s arrest warrant and affidavit until the completion of the Club Q investigation because that information “could jeopardize the ongoing case investigation” if it were released publicly.

Here’s what we know so far.

He Appears To Have Made A Bomb Threat Last Year

Multiple outlets have reported that in June of last year, a man of the same name and age as Aldrich was arrested after the suspect’s mother reported he had made threats against her involving a homemade bomb and other weapons. The suspect allegedly refused to comply with police orders for several hours after authorities located him near his mother’s home, forcing the evacuation of several nearby residences. He eventually came out of the house he’d been in and was taken into custody. Police did not recover any explosives.

Footage obtained by CNN showed the suspect surrendering to police after the bomb threat, walking toward an armored police vehicle with his hands raised and his back toward the doorbell camera.

The police accused him of felony menacing and first-degree kidnapping, but no formal charges were filed in the case and it was ultimately sealed, the Colorado Springs Gazette reported.

An editor at The Gazette reportedly received a voicemail from the suspect in August asking for the story to be removed or updated.

“There is absolutely nothing there, the case was dropped, and I’m asking you: either remove or update the story,” the suspect said, according to the publication. “The entire case was dismissed.”

A Twitter account for Colorado’s trial courts said Sunday it did not have any available public records related to Aldrich, whether about the shooting at Club Q “or any other matter in Colorado.” Unnamed sources told Denver’s Fox affiliate that charges related to the bomb threat were dismissed because the victim — the suspect’s mother — refused to cooperate with investigators.

HuffPost was unable to reach the suspect’s mother, Laura Voepel, for comment. Law enforcement and other officials in El Paso County did not return HuffPost’s questions about the 2021 incident, nor about this weekend’s shooting.

Leslie Bowman, Voepel’s landlord at the time of the alleged bomb threat, told The Gazette and The New York Times that Voepel moved out after the incident, but that police arrived at the property about a month ago looking for Voepel so they could perform a wellness check.

Bowman also told the Times that she had seen an “aggressive side” of Aldrich, and recalled an instance when the man slammed a door in her face following a bathroom repair issue.

Aldrich purchased the weapons used in the Club Q shooting, CNN’s Evan Perez reported, citing unnamed sources, although the outlet also said it wasn’t clear when the weapons were obtained. According to the same sources, the 2021 arrest would not have shown up in background checks because no charges were pursued and the case was sealed.

However, if the bomb threat suspect and the alleged shooter are in fact the same person, it raises questions about whether Colorado’s “red flag” law was used at any point to confiscate Aldrich’s weapons.

“Red flag” laws, which allow judges to intervene and confiscate firearms from people whom police or family members flag as potential threats to themselves or others, are among the most contested gun regulations in the country. Many conservative jurisdictions and sheriffs have declared themselves “sanctuary” jurisdictions for gun owners who are flagged as potential risks.

There’s no indication so far that Colorado’s red flag law was invoked with respect to Aldrich. Colorado’s law is used at one of the lowest rates in the nation: Judges there issue gun surrender orders at one-third of the overall rate for the 19 states and the District of Columbia with red flag laws, according to The Associated Press. In Colorado, judges can order the seizure of weapons for between 14 days and six months, and can extend those orders in six-month increments, the report noted.

Colorado Springs has long been a hub for right-wing activism. In 2019, El Paso County’s commissioners voted unanimously to support a “2nd amendment preservation resolution” indicating they would fight the law, which was then a legislative proposal, in court but would support its enforcement. Sheriff Bill Elder said similarly that deputies would enforce the law, but predicted incorrectly that “under a constitutional challenge, it would get overturned.” According to The Associated Press, there were 13 temporary firearm removals in El Paso County through the end of last year, including four that lasted at least six months.

The Suspect’s Grandfather Is Reportedly A MAGA Lawmaker

Aldrich’s grandfather is reportedly Randy Voepel, a right-wing legislator in the California state Assembly who has voiced opposition to marriage equality in the past, and who initially celebrated the Jan. 6 Capitol attack.

Heavy.com and The Gazette have both reported the familial relation, the first based on social media postings from the suspect’s mother, the latter based on an unnamed relative of the family. Voepel’s Twitter bio describes him as a “Husband. Grandfather. Veteran.”

Voepel did not respond to HuffPost’s request for comment.

“This is Lexington and Concord. First shots fired against tyranny,” Voepel told The San Diego Union-Tribune in an article published Jan. 9, 2021, just days after the riot at the U.S. Capitol. “Tyranny will follow in the aftermath of the Biden swear in on January 20th.”

He subsequently said he did not support the violence and “lawlessness” at the Capitol, but that the attack was “a sign of the deep division currently facing our nation.”

Voepel said at one point that he was leaving the Republican Party to become an independent because his views were more in line with the Tea Party movement. After redistricting changes put him in the same Assembly district as fellow Republican Marie Waldron, Voepel was defeated by a 35-point margin in the GOP primary election this year.

In 2015, after the U.S. Supreme Court ruled that same-sex couples had the legal right to marry, Voepel, who was then mayor of Santee and a candidate for the California state Assembly, said at a California Republican Assembly meeting, “Personally I’m a Southern Baptist. I do not support gay marriage in a biblical way but it’s the law of the land.” He added the decision might have been stopped if more Christians had stood up, according to East County Magazine.

“Personally I’m a Southern Baptist. I do not support gay marriage in a biblical way but it’s the law of the land.”

Santee, a suburban city outside of San Diego, has earned the nickname “Klantee” in reference to a history of racially motivated attacks and other incidents, the Union-Tribune reported, including in 2020 when a man went grocery shopping with a white Ku Klux Klan hood on. Voepel criticized the nickname in 2015: “I say no, we’re the La Jolla of East County.”

Santee was also the site of a school shooting while Voepel was mayor. Randy Gordon, 17, and Bryan Zuckor, 14, were killed and 13 others were wounded in a March 5, 2001, attack at Santana High School, according to Los Angeles Times. Charles Andrew Williams, 15 at the time of the shooting, pleaded guilty to murder and attempted murder and was sentenced to 50 years to life in prison for the attack, though the sentence was later reduced to 25 years, San Diego’s ABC affiliate reported.

“This is the class not only of 2001 but March 5,” Voepel said at the high school’s graduation ceremony. “The whole school will always be the class of March 5.”