Whoâ€™s in the Running to Be Joe Bidenâ€™s Vice President? 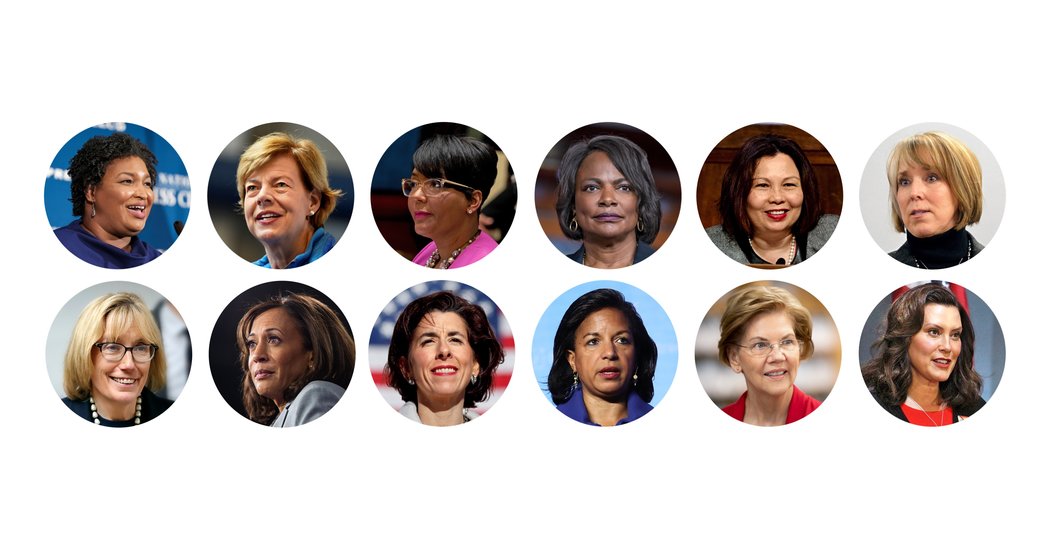 Joseph R. Biden Jr. is deep into his search for a running mate. The process began with a list of more than a dozen potential candidates, all of them women. His team has narrowed that list, conducting multiple interviews and collecting sensitive personal documents from a number of the most important contenders.

Biden, 77, says he wants a running mate who is ready to assume the presidency, who shares his priorities and with whom he is â€œsimpatico.â€ He is aiming to announce his choice by Aug. 1.

These are the women we know to be under consideration:

How seriously is she being considered? Very seriously. Harris, 55, is in an advanced stage of the vetting process and is seen as among the likeliest candidates to be chosen.

Relationship with Biden: Harris had a friendly relationship with Biden before they competed in the 2020 primaries, and Harris knew his late son, Beau, when they served as attorneys general. But Harris also attacked Biden more harshly than any other Democrat in the 2020 race, rebuking him in the first televised debate for having worked with segregationist senators to oppose school busing policies in the 1970s.

Pros and cons: Harris is among the best-known black women in American politics, with appeal to both moderates and liberals. But she ran an unsteady presidential campaign last year and struggled with questions about her law-enforcement record. The way she and her advisers handled the 2020 primary left some in the Biden campaign with significant reservations.

On being considered for vice president: â€œI know that conversation is taking place in the press and among the pundits, and Iâ€™m honored to even be considered, if thatâ€™s the case.â€

How seriously is she being considered? Very seriously. Warren, 70, is among the strongest contenders and she has reached an advanced stage of the vetting process.

Signature issues: Has long criticized wealth concentration and corporate power; proposed plans to break up big companies, tax the extremely rich and use proceeds to fund new social benefits; recently called for investigations of how the Trump administration has distributed economic stimulus money and pushed a measure to strip the names of Confederate generals from military bases.

Relationship with Biden: Warren and Biden have a relationship of mutual respect, framed by significant ideological differences. When Biden was a senator and Warren a Harvard professor, they clashed in a Senate hearing over bankruptcy regulation. But when Biden was mulling a campaign for president in 2016, he met with Warren privately and considered the idea of asking her to run with him.

Pros and cons: Warren would bring sterling progressive credentials and a forceful economic message to Bidenâ€™s ticket. But she does not represent racial or generational diversity, and her populist record could unnerve some moderates.

On being considered for vice president: â€œIâ€™m focused right now on this crisis.â€

Bio: Mayor of Atlanta since 2018; served two terms on the Atlanta City Council.

How seriously is she being considered? Very seriously. Bottoms, 50, has been interviewed by the Biden team and she has drawn even closer review as her national profile has grown in recent weeks.

Signature issues: Among the most prominent city leaders grappling with the coronavirus pandemic and answering the calls for police reform and racial justice; quickly called for the firing of the officer who fatally shot Rayshard Brooks and then announced new restrictions on the use of force by police; made criminal justice reform a major priority, including strictly limiting the use of cash bail.

Relationship with Biden: Bottoms was an early supporter of Mr. Biden in the presidential race, serving as a fiercely loyal campaign surrogate, even when he was down in the polls.

Pros and cons: Bottoms has cut an impressive figure during a national reckoning over race and policing, and she hails from a crucial political battleground. But her short time in high office could be an obstacle.