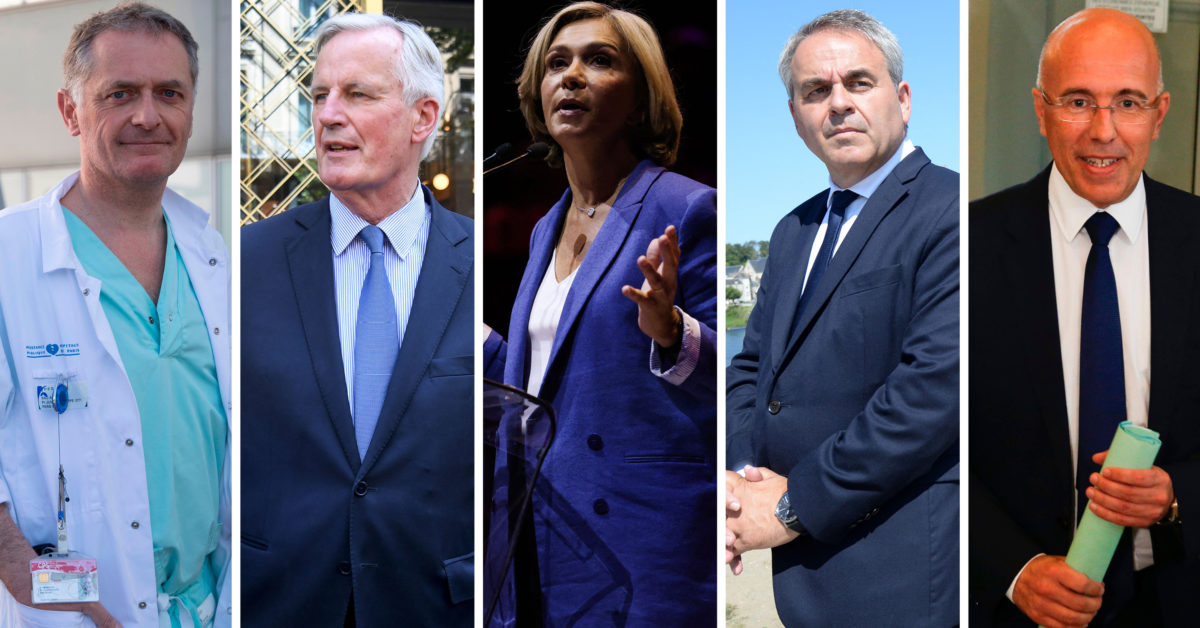 PARIS â€” Emmanuel Macron did more than secure the presidency in 2017: he stomped all over one of the traditional big beasts of French politics, the conservative Les RÃ©publicains.

Since then, the party has been staggering around like a drunk at a wedding but it needs to pull itself together ahead of next yearâ€™s presidential election.

Its first task is to choose a candidate to take on Macron and far-right leader Marine Le Pen. They also need to prevent voters from being drawn to the candidacy of TV pundit Eric Zemmour, who is pushing for tougher measures on immigration and French identity. Zemmour hasnâ€™t yet made his bid official, but is already adding to division among the conservatives.

For months, the conservatives have adopted a Darwinian approach, hoping that a leader would naturally emerge from the ranks and impose him or herself on the party. It hasnâ€™t happened.

There are plenty of candidates to choose from and itâ€™s looking more and more likely that Les RÃ©publicains will have to hold an internal primary to pick somebody to top the ticket.

The conservatives are hoping to capitalize on morale-boosting wins in recent regional elections to disrupt the anticipated second-round faceoff between Macron and Le Pen in 2022. To maintain momentum, they urgently need to unite behind a candidate that can lead them into the campaign.

Here are the names to look out for in the conservative candidate contest:

A graduate from Franceâ€™s elite National School of Administration (ENA), PÃ©cresse rose steadily through the ranks, from government adviser to cabinet minister. She presents herself as â€œtwo-thirds Merkel and a third Thatcher,â€ to which a government spokesperson quipped â€œsheâ€™s much more two-thirds no manifesto, one-third no ideas.â€

PÃ©cresse is a potential threat to Macron. She is close to him on economic issues and, as head of the ÃŽle-de-France region which includes Paris, has hands-on government experience. Her work confronting problems in the impoverished Parisian banlieues has gone some way to countering her upper-crust reputation. She also appears to be catching up with her main opponent Xavier Bertrand in the polls.

If chosen, PÃ©cresse would be Franceâ€™s first female conservative candidate. She has confided that French politics is â€œa manâ€™s worldâ€ where she has been mocked for her â€œhairband and pleated skirtâ€ look.

Strength: Clean track record. PÃ©cresse has dodged many of the divisions and sleaze allegations in the party.

Weakness: Too posh. She struggles to shake off her bourgeois image.

Bertrand hopes to squash the opposition without taking part in a party primary, which he vehemently opposes. President of the northern Hauts-de-France region, he officially left Les RÃ©publicains but remains aligned with them and announced his candidacy before the summer.

A former insurance man, Bertand says he has always been mocked in elite Parisian circles due to his humble beginnings. As an MP, he was nicknamed â€œfloc flocâ€ because of the sound of his rubber-soled shoes on the marbled floors of the National Assembly. But Bertrand hopes his â€œman of the peopleâ€ touch will prove an asset not a handicap in the race for the ElysÃ©e.

He pushes conservatism with a welfare twist and struggles to find support among party colleagues (hence the aversion to a primary). â€œHeâ€™s not liked and he is not a team player,â€ said one party heavyweight. However, polls suggest he is more popular with voters and could be the partyâ€™s best shot at the ElysÃ©e. After winning elections in the north of France this year, Bertrand announced he had â€œsmashed the jawsâ€ of Le Penâ€™s National Rally.

Strength: Tenacity in the face of adversity from friends and foes.

Weakness: A go-it-alone tendency. To get to the presidency, Bertrand will need to build bridges.

The EUâ€™s former Brexit point man brings well-honed negotiating skills to the table. Barnier declared his candidacy in August. An ex-minister and EU commissioner, he says he wants to be â€œusefulâ€ and a â€œteam leader.â€

Barnier held 27 EU member states together on Brexit, so how difficult can it be to herd a gaggle of French politicians? Pretty hard. First off, heâ€™ll have to remind everyone in the party where heâ€™s been for the past five years. Next, heâ€™ll need to shake off the aura of an aloof Brussels technocrat.

One of his first moves as a primary candidate was to take a couple of potshots: at those in the party who donâ€™t want to play by â€œthe rules of the gameâ€ and at Macron. Barnier worked closely with the French president on Brexit but now says his leadership has been too â€œsolitary, too vertical and sometimes too arrogant.â€

Strength: Deal clincher. Barnier got Brexit done while his colleagues were squabbling after their defeat to Macron in 2017.

Weakness: A lack of clickworthiness. Some say he is a bit dull.

Ciotti is the surprise candidate. A hardliner and MP from the south of France, Ciotti was once Nicolas Sarkozyâ€™s muse on law and order, back when the conservatives were running France.

In the past, he suggested jailing parents of delinquent children who break bail and suspending benefits for parents whose kids skip school.

According to a member of his entourage, Ciotti has widened his range and is now confident on other topics such as COVID-19, nuclear power and industrial autonomy.

Ciotti ruffled feathers in his own camp last Sunday when he said he would prefer to vote for Zemmour than for Macron. He told the RTL radio station that he would â€œvery definitelyâ€ vote for Zemmour if the TV celebrity faced Macron in a hypothetical runoff vote.

Strength: On the money. Law and order is a top issue in the faceoff between Le Pen and Macron.

Weakness: The law bit. Some of his past proposals werenâ€™t exactly legal.

Another outsider, Juvin has one big asset: He can speak with authority on a surprising number of issues.

As head of the emergency ward of a big Paris hospital, Juvinâ€™s profile has been turbo-driven during the COVID-19 pandemic. He is also a former army doctor who served in Afghanistan, an ex-MEP and one-time mayor of a town in the Paris suburbs.

Striking a different note to his conservative colleagues, Juvin styles himself as champion of Franceâ€™s public services.

Strength: Versatility. Juvin has some backup career plans if he doesnâ€™t become president.

Weakness: Lightweight. He is low down in the conservative pecking order

Wauquiezâ€™s return to national politics has been widely anticipated and much called for. But the president of the Auvergne-RhÃ´ne-Alpes region insists he wonâ€™t be running this time.

Wauquiez was a party wunderkind who aced his exams and soared through the ranks, before inheriting the party leadership from his mentor Sarkozy in 2017. Thatâ€™s when it all went wrong. Wauquiez made blunders, sparked controversies and was accused of sidelining rivals at the top of the party.

After disastrous election results in 2019, he quit the party presidency to focus on his regional mandate far from Paris. â€œHis leadership left a mark,â€ said one rival â€”Â but not in a good way. However, after his reelection as head of his southeastern region in June with 55 percent of the vote, many supporters hoped Wauquiez would return.

Strength: Headline grabber. Wauquiez knows how to make waves, whether itâ€™s accusing Sarkozy of wire-tapping colleagues or forgetting he had once protested wearing a yellow vest.

Weakness: Marmite. Some love him, some hate him.

Prospects: 0/10 (Unless heâ€™s persuaded to change his mind.)

and â€¦ The referee: Jean Leonetti

Leonetti has the task of finding Les RÃ©publicainsâ€™ candidate. The mayor of Antibes is pushing for a primary to be held this fall and is trying to convince Bertrand to take part. Les RÃ©publicains have launched a nationwide poll to help them decide whether to go ahead with a primary. A decision should be made at a party conference this month. If they donâ€™t, party grandees may make the call on who runs.