Why Britain and France canâ€™t stop fighting about fish 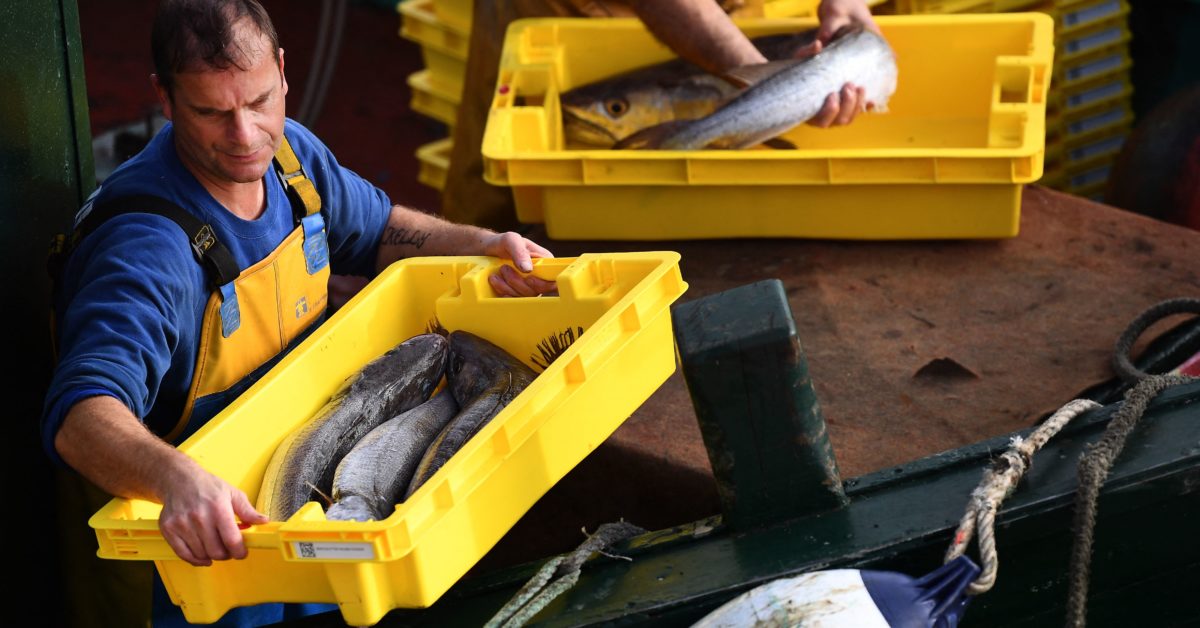 LONDON â€”Â Britain and France are barking at each other over fish again.

But why? And who is right?

Fish is a tiny contributor to both countries’ national incomes â€” 0.06 percent of Franceâ€™s economy and 0.1 percent of the U.K.â€™s. â€” but could nonetheless trigger a trade war and poison the U.K.â€™s relationship with its closest neighbors.

Hereâ€™s what you need to know:

As Brexit geeks will remember fondly, negotiations around Britain’s exit from the bloc were conducted in two phases. The first covered the divorce process â€” the so-called Withdrawal Agreement â€” which dealt with citizens’ rights, the bill faced by the U.K., and arrangements for Northern Ireland, and was signed in January 2020.

Both agreements left quite a lot of details unspecified, to be handled by a network of committees and working groups that would figure out how things would work in practice.

So while the basic deals have been struck, these structures, described by one official last Christmas as â€œbatshit â€˜House of Cardsâ€™ bureaucracy,â€ are just getting started.

So who’s right on fish?

Brexit ended the Granville Bay agreement between the U.K. and the autonomous governments of the Channel Islands, which set rights for French boats fishing in the waters off of Jersey and Guernsey.Â

The Brexit trade deal contained an agreement on fisheries â€” but the French and the British hold opposing interpretations.

This is because the text is ambiguous: French fishers are allowed to continue operating in Channel Islandsâ€™ waters as long as they can prove they previously fished there, but it does not specify what evidence is needed.

The U.K. wants positional data showing fishing activity in its waters as well as a record of the catches.

British authorities acknowledge that many small boats that don’t carry GPS systems may struggle to produce such evidence. They also argue some fishers may have had permission to fish in Channel Islandsâ€™ waters before Brexit but never made use of it, so they should not qualify under the new rules.

French fishermen, however, counter that the Brexit trade deal provides for continuity of fishing in those waters. They say they have meticulously kept paper logbooks that prove they were operating legally in British waters before Brexit, and that the Brits are just being difficult.

How many boats are affected?

The U.K. government says itâ€™s granted 98 percent of the EU applications for permits â€” about 1,700 licenses, of which over 700 have been issued to French vessels.

Some of the licenses disputed by the French relate to permits issues by Jersey and Guernsey. The French argue only 90.3 percent of the total applications have been approved.

Jersey has so far granted fishing licenses to 162 French boats. Of those, 113 obtained permanent licenses, an increase of two since the row started. A further 49 vessels were given a temporary license, up by 18. These boats will be allowed to fish in Jersey waters until January 31, 2022, but must use this time to provide the Jersey government with additional data to secure a permanent license.

That leaves 55 French boats still waiting for a permit. Since Sunday they have been unable to fish in Jersey waters.

Wait, this whole thing is about 55 boats?

Fishing represents a tiny percentage of the GDP for Britain and for France but itâ€™s highly symbolic in both countries.

The French fear that if the U.K. is allowed to get its way in this fishing row so early into the new EU-U.K. relationship, that could set a precedent for other post-Brexit disputes.

Castex told von der Leyen Brussels should demonstrate to the public that it is more damaging to leave the EU than to stay. He argued that if a compromise can’t be found via a meeting of the EU-U.K. Partnership Council, which oversees the trade deal, the EU should take “corrective measures,” notably by instituting tariffs on certain seafood products.

Paris wants the EU to ensure Britain will honor commitments it made to the bloc in other areas and prevent further surprises in the years ahead.

Next year’s French presidential election may also be playing a role, with French President Emmanuel Macron keen to make it clear to domestic Euroskeptic forces that life outside the EU is cold.

What could France do?

The French government said it would impose â€œtargeted measuresâ€ if the fishing row is not resolved. Originally planned for midnight Tuesday, Macron said his government will postpone retaliatory action against Britain over a post-Brexit fishing row until the end of Tuesday.

These include preventing British fishing boats from disembarking at French ports; increasing border and sanitary checks on U.K. goods; toughening security checks on British boats, and increasing checks on trucks moving between the two countries.

This could see fish and seafood caught by British fishers rot, warned Chris Huggins, a professor of politics at the University of Suffolk who has studied the governance of fisheries after Brexit.Â

British fishers in that situation might try to land their catches in the U.K., where thereâ€™s a smaller market. They could also try other EU ports, mostly Belgian, but the Brexit trade deal would make this very difficult, he said.

â€œBefore Brexit it would have been very easy â€” a U.K. vessel would have gone to a Belgian port and landed. Now you can only go to certain ports designated to take non-EU fishing vessels, and in addition to that youâ€™ve got to give plenty of notice. And that notice period might be long enough not to make it an attractive option.â€

If the French decide to take targeted action, they are likely to hit British boats fishing in French waters, including those catching scallops â€” one of the highest-value catches for English fishers. This would probably be welcomed by the French fishing community, which in previous years complained that their British counterparts pillaged scallops stocks off the coast of Normandy.

Paris has also warned it is preparing further sanctions, which could include tariffs on electricity supplies to Jersey â€” a threat first issued in May. France has also asked the EU to halt cooperation with Britain in other areas until the dispute is over â€” and the Brits fear this is behind delays to their association to the EUâ€™s R&D funding program, Horizon Europe.

Whatâ€™s in it for Boris Johnson?

The British government, too, has kept the temperature high.

The U.K. saysÂ there are problems with chapters of the protocol on issues such as governanceÂ but Brussels insists the agreement is not up for renegotiationÂ and only wants to discuss ways to make its implementation less burdensome for businesses and people in Northern Ireland. Two weeks of talks haven’t achieved much.

Against this backdrop, French threats over fishing play into Johnsonâ€™s hands by increasing British public support for unilateral action over the protocol. One Tory suggested the EU is being too strict in enforcing the Northern Ireland protocol, and the U.K. is enforcing the trade deal to the letter of the law on fish, so it would make sense for both sides to give ground to come to a resolution.

Johnson critics point out that a row with the French is a useful distraction from plenty of other things that aren’t going brilliantly for the prime minister â€” including supply chain problems, labor and fuel shortages, and the COP26 climate summit.

The U.K. has warned it will suspend parts of the protocol in the coming weeks if the EU continues to reject its demands. This unilateral action would be achieved by triggering Article 16 of the protocol, and would be limited to the areas where no compromise is reached.

Suspension of the protocol gives London time to gather evidence supporting its hypothesis that the U.K.â€™s approach in Northern Ireland does not undermine the EUâ€™s single market, and to persuade EU member nations that a trade war would be much worse than the changes Britain is seeking.

What will happen next?

All hell might break loose if ongoing technical talks between the EU and the U.K. on the remaining applications for licenses do not end up with a satisfactory outcome for the French by Thursday.

France has called for a strong EU response and a meeting in early November of the EU-U.K. Joint Partnership Council, which oversees the trade deal, but no date has been set.

The meeting would need to take place before the EU takes action against Britain under the TCA by, for instance, imposing tariffs on certain British seafood products â€” as Castex proposed in his letter.

All of which would have an impact on Britainâ€™s already strained supply chains, increase food prices, poison the Northern Ireland talks and make it harder for both sides of the Channel to rebuild their cooperation after Brexit.

Huggins warned retaliatory action on fishing â€œgoes against the cooperation needed in fisheries management,â€ puts at risk the viability of the industry, and could also lead to a less safe environment for fishers, as seen in previous rows in the Channel, when British and French boats clashed with each other.

With all that in mind, the two sides may end up with a fudge.

What does this say about the EU-UK relationship?

Europhiles argue the EU was built precisely to prevent this type of cross-border rows between neighboring countries that share valuable resources.

British ministers keep talking up post-Brexit ties with Spain, Italy, Portugal, the Baltic countries and the VisegrÃ¡d group, but expect relations with Paris and Berlin to remain cool for some time. Â

U.K. Foreign Secretary Liz Truss pointed to Britainâ€™s new deals with non-EU countries when asked during a radio interview Monday if relations with the Continent would continue to be fractious, only adding that London wants a â€œconstructiveâ€ relationship with France when pushed.