Why do some people succeed when others fail? Outliers provide clues 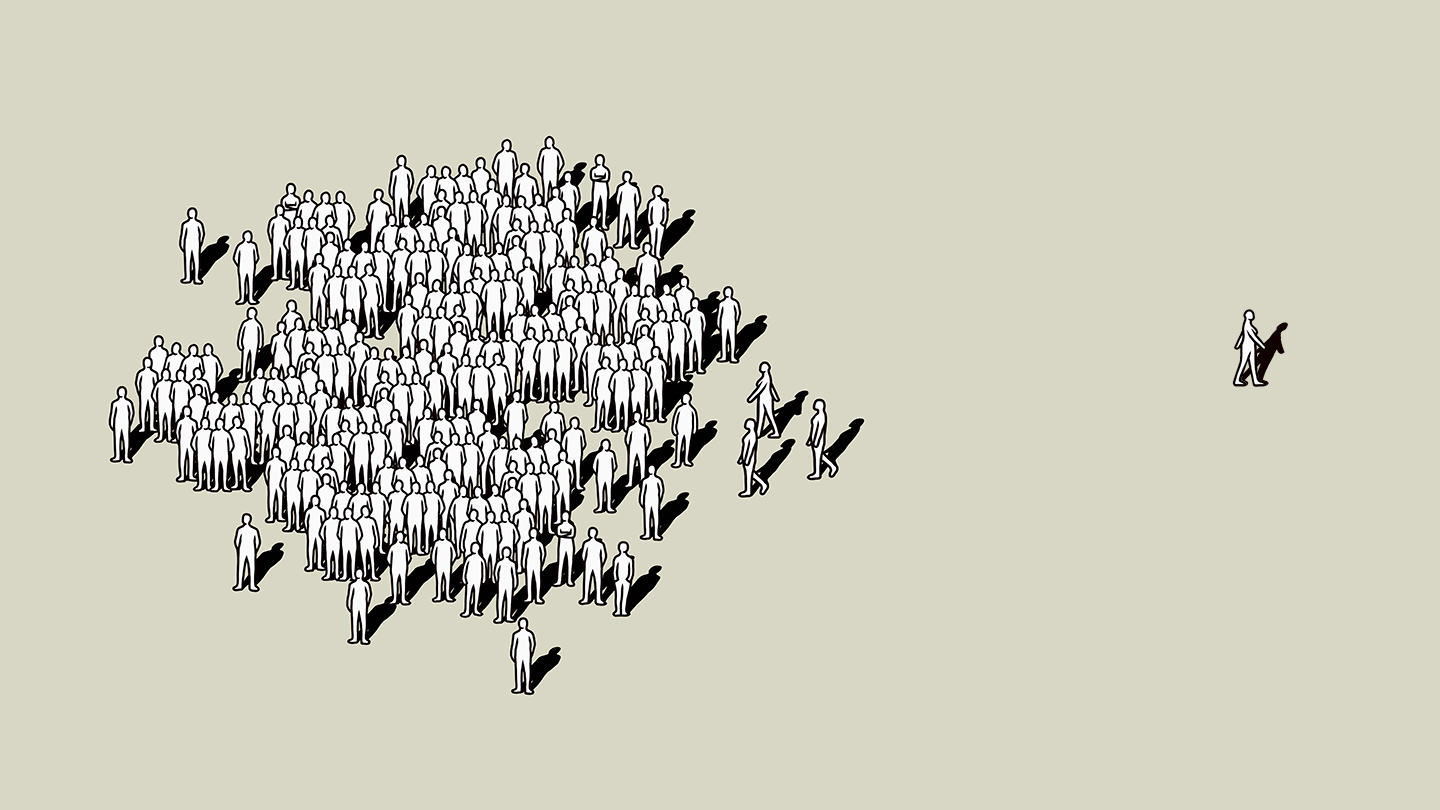 Northern Somaliaâ€™s economy relies heavily on livestock. About 80 percent of the countryâ€™s annual exports are meat, milk and wool from sheep and other animals. Yet years of drought have decimated the regionâ€™s grazing lands. By zeroing in on a few villages that have defied the odds and maintained healthy rangelands, an international team is asking if those rare successes might hold the secret to restoring rangelands elsewhere.

Answering this question requires turning traditional data processing on its head. Statistically speaking, success stories like those Somali villages with sustainable grazing are the outliers, says Basma Albanna, a development researcher at the University of Manchester in England. â€œThe business as usual is that when you have outliers in data, you take them out.â€

Yet those outliers can hold vital information, say Albanna and others who use the â€œpositive devianceâ€ approach. They sift through data to find signals in what many deem noise. The researchers search for â€œdeviantsâ€ â€” outliers in big datasets â€” to uncover why some individuals or communities succeed when others facing near-identical circumstances fail. Then, armed with these insights, the researchers develop strategies that help those in the languishing majority attain positive results.

Positive deviance has the potential to address a nagging problem, says Megan Higgs, a statistician and independent consultant in Bozeman, Mont. â€œIn research in general we have an overemphasis on quantifying averages,â€ Higgs, the editor of the International Statistical Instituteâ€™s blog Statisticians React to the News, says. She notes that few people in a research pool may actually fit the average. Sometimes, averages obscure vital information.

Without approaches such as positive deviance that look at groups and individuals in the margins, â€œI just worry that we are missing a hugely important part of the picture,â€ Higgs says.

The term â€œpositive devianceâ€ first appeared in the mid 1970s, but the approach did not gain traction until nearly two decades later. In 1990, Monique Sternin and her late husband Jerry Sternin, then aid workers with the humanitarian organization Save the Children, piloted a positive deviance project in Vietnam to address the countryâ€™s soaring rates of childhood malnutrition. Vietnamese government officials asked the couple to help communities without resorting to food handouts or other common, yet unsustainable, aid practices.

Instead, the Sternins sought to identify children in impoverished communities who remained well fed against tremendous odds. Working in four villages in Thanh Hoa province, which combined had 2,000 children under age 3, the Sternins trained villagers to weigh the children. The effort revealed that almost 70 percent of the children were malnourished; about half were at risk of death.

The couple then asked the villagers to identify children with healthier weights among the poorest families. Each village had a handful of families that fit the bill. â€œWe went to talk to those people,â€ says Monique Sternin, now a positive deviance consultant in Boston, Mass.

The Sternins discovered that kids with healthier weights came from families who fed their children tiny shrimp and crabs that lived in rice paddies and potato greens found along roadsides. Village wisdom regarded these foods as â€œtaboo,â€ or dangerous, Sternin says. The families with healthier kids also fed their children three to four meals per day instead of the customary two meals.Â

On the surface, the solution seemed simple: Get more families to feed their children these taboo foods. But implementing this solution was not at all easy. â€œThe positive deviants are outliers, rebels,â€ Sternin explains. The Sternins could not ethically â€œoutâ€ families that were bucking social norms and traditions.

Instead, they promised villagers free rice. In exchange, villagers attended cooking sessions with their kids, facilitated by aid workers and taught by village women. Those sessions provided villagers with an extra meal every day for 12 days. But to participate, the villagers had to bring and take turns preparing the tiny shrimp and crabs, along with wild greens. Over those 12 days, parents and caregivers saw for themselves that the foods made the children healthier, not sicker.Â  Â

Although their work was not based on a formal study, â€œwhat we found quickly was children were putting on weight,â€ Sternin says. And the children stayed healthy thanks to their altered diets â€” after a year, more than a thousand children in the villages were no longer malnourished.

The couple went on to establish similar programs around the country. Others adopted this method, and today, similar nutrition programs exist worldwide.

The Sterninsâ€™ work was inspirational, but required a personalized approach to gather data. Albanna wondered if big data, such as government surveys, satellite images and social media content, coupled with qualitative research, could get the job done with lower start-up costs.

Big data offers several benefits, Albanna explains. The datasets already exist, so the process is initially less labor intensive than going door to door. Identifying outliers at the level of villages or neighborhoods instead of individuals reduces privacy concerns.

Large datasets also reduce the risk of selecting those who got ahead through luck. â€œPositive deviants are very rare to find. Weâ€™re talking 2 to 10 percent of whatever sample you are investigating,â€ Albanna says. So the larger the dataset, the more positive deviants you would be able to identify, she notes.

In 2019, Albanna and several international partners cofounded the Data Powered Positive Deviance collaborative. Pilot projects in the collaborative are identifying the safest public spaces for women in Mexico City and mapping communities producing the most millet in Niger. A project locating districts that were best at stopping the spread of COVID-19 in Germany reported its findings in September in the International Journal of Environmental Research and Public Health. The collaborative also conducts the Somalia healthy rangeland project.

In Somalia, the team first had to find successful villages. â€œWe started, hoping that we would be able to identify communities that are able to sustain and maintain the numbers of their livestock after the 2016-2017 drought,â€ Albanna says. That drought was severe, leaving more than half the country with food shortages (SN: 1/19/19, p. 7).

The team then zoomed in on 314 villages in northern Somaliaâ€™s mountainous West Golis region and looked at three sets of data. The researchers grouped similar villages together using rainfall and land cover data. Earth-observing satellite data from 2016 to 2020 provided a gauge of vegetation density. That process helped them identify 13 potential positive deviants, villages that had maintained healthier vegetation despite the drought.

Detailed satellite images of those outliers revealed unique conservation techniques that helped preserve nearby rangeland. For instance, some villages used shrub barriers around settlements to limit erosion or carved half moon-shaped basins into landscapes to retain water, the researchers reported online December 24 in Development Engineering.

To find out what propelled the villagers to adopt those successful practices, the team sent a local pastoralism and rangeland consultant, Mohamed Jama Hussein, to sleuth around. Hussein compared 10 of the potential positive deviant villages with two villages showing average levels of vegetation density and eight hard-hit, low-vegetation villages â€” the negative deviants. He discovered that the leaders of positive deviant villages had aggressively blocked private citizens from enclosing communal lands for personal use. By contrast, â€œsquattingâ€ on public lands remained common in the other villages.

Hussein also observed that farmers in the successful villages were moving away from the purely pastoral life to diversify their sources of income. Some villagers had started growing their own crops and even livestock feed. Many women, meanwhile, had started keeping bees, which offered an unexpected perk, Albanna says. The beesâ€™ presence deterred people from cutting down rangeland shrubs and trees for fuel.

â€œItâ€™s such an easy adaptation that could potentially have major impact,â€ says Ruggeri, who wrote a commentary encouraging researchers to consider using the positive deviance approach in November 2021 in Perspectives in Psychological Science.

Consider nudges, a popular intervention that relies on simple tools to change behavior, wrote Ruggeri and coauthor Tomas Folke, a computer scientist at Rutgers University in New Brunswick, N.J. Researchers have tested if nudging people with reminders to attend their doctor appointments can reduce no-shows. For instance, a study published in 2011 in the Journal of Telemedicine and Telecare showed that, across 29 studies, automated recordings or text messages increased attendance by 29 percent.

But when another research team, which included Ruggeri, scoured the electronic medical records of almost 64,000 low-income urban patients, who can miss up to 45 percent of their appointments, a robocall followed by a text message failed to increase attendance. Those results were published in April 2020 in BMC Health Services Research.

Nudge interventions often target the average participant, Ruggeri says. â€œIf you look at the way nudging is largely done, it speaks to a middle-class-and-above population.â€ But researchers attempting to shrink societal inequalities could use a positive deviance approach to help the neediest individuals, Ruggeri says.

In the above examples, that would mean identifying low-income participants who did go to the doctor after receiving an automated reminder. Mapping those individualsâ€™ paths could potentially lead to nudges and other behavioral interventions targeting potential no-shows in similar situations. That way, Ruggeri says, policy makers could reach the cohort most likely to benefit from preventive care.

That is the hope in Somalia, where Hussein wrapped up his fieldwork a few weeks ago. The team is now investigating how to use their newfound knowledge of successful outliers to develop behavioral and policy interventions.

Such interventions have an added benefit: They empower communities to harness the wisdom of their own people, Sternin says. The solutions exist within the community and implementing those solutions, she notes, â€œis transformational.â€Â