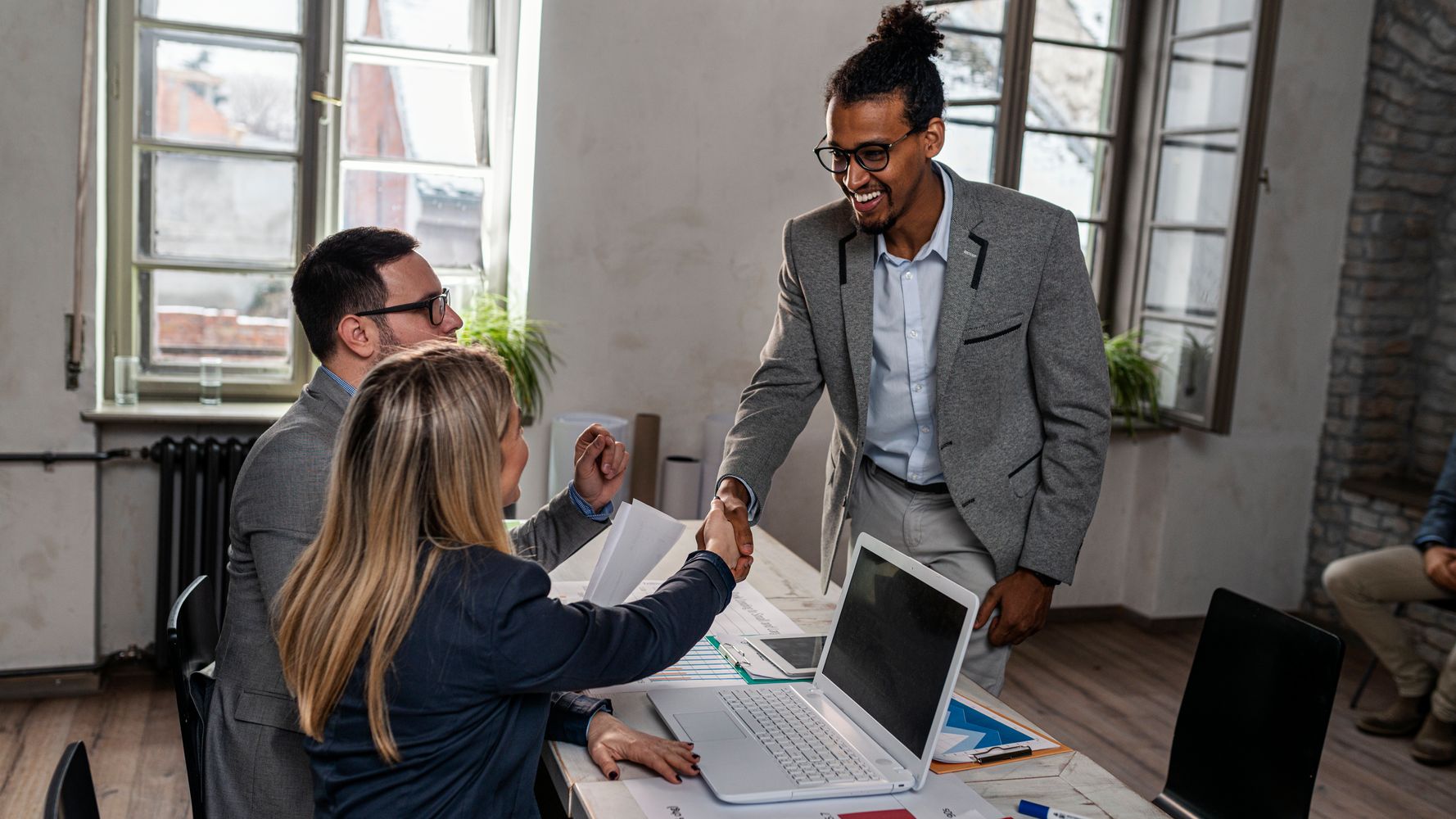 As someone whoâ€™s had more than 20 jobs (fluctuating from temporary positions to career-defining roles), nearly all of my interviewers have been white.

Each interview Iâ€™ve stepped into, Iâ€™ve known my otherness â€“ my ethnicity, my religion, and even my gender â€“ was going to be a player during this time.

Though Iâ€™ve used this to my advantage to impress employers, I wish Iâ€™d spent time being wooed by them too. Because Iâ€™ve ended up working for companies which are toxic, ruthless and uncaring.

Understandably, the power dynamics in a job interview are unlike anything else; youâ€™re supposed to show yourself off and grovel for approval. That doesnâ€™t leave a lot of time to get to know the company and how it can benefit you.

The only part of the process â€“ the â€œDo you have any questions for us?â€ segment â€“ is usually a closing feature, where participants often ask questions that will say more about them, than the company (the â€œlook, Iâ€™ve done my research about youâ€ trick).

But thereâ€™s a real reason to use the final moments of an interview to quiz your interviewers and get to the nitty gritty. After all, you also need to find out if the company is the correct fit for you â€“ and crucially, how they nurture diverse talent.

The pandemic especially has shown the importance of having employers that work for individual needs. And where they donâ€™t, many staff are quitting in their droves â€“ a Microsoft survey of more than 30,000 global workers showed 41% were considering quitting or changing professions this year. In the US alone, April saw more than four million people quit their jobs, according to the Department of Labor â€“ the biggest spike on record.

A few months ago (before joining HuffPost), I was interviewed for a leadership position, but I had a lot of questions and arranged for a follow-up interview where I could take the time to enquire about everything.

Iâ€™m glad I did, because the recruiters showed their true colours. When it came to negotiating salaries, I was told by the CEO it was concerning for me to discuss money for a role that was otherwise a â€˜complimentâ€™ to me.

I promptly wrote the letters NO on my notebook as he spoke, deciding to reject the offer. Given that ethnic minority women are overlooked for such positions and grossly underpaid (Black, Asian and other minority ethnicities lose out on Â£3.2 billion a year in wages compared to white colleagues doing the same work), it didnâ€™t feel concerning at all to bring up money.

If we didnâ€™t have this conversation so early on, I may have ended up working for a company that would make me unhappy. It might feel like youâ€™re being ungrateful, but thereâ€™s merit in quizzing your interviewer â€“ it shows recruiters youâ€™re keen to know your place in the company, as well as signalling to you any potential red flags about them.

For 27-year-old Masuma*, a Muslim woman from Manchester, who applied for a marketing position, asking questions about faith provisions led to positive changes.

â€œI once asked if there was a prayer space and the reply was â€˜you can use the board room but thereâ€™s usually meetings in there so maybe avoid booking it during lunch breaksâ€™ â€“ which were prayer times so that was going to be a problem,â€ she tells HuffPost UK.

â€œWhile I never got the job, because it was definitely out of my reach, I got an interview anyway. The recruiters really liked me and then offered me a role that was linked to the original. I took the job because it was really exciting and since then, Iâ€™ve voiced a lot of my concerns regarding prayer space and other things like diversity and inclusivity, which theyâ€™ve listened to.â€

For 33-year-old Hina Jabeen, from Solihull, West Midlands, asking questions resulted in a confrontation which secured her feelings towards the recruiter.

â€œIâ€™m an expert at interviewing,â€ she says. â€œOver the past two years since being made redundant, Iâ€™ve interviewed 174 times including getting to final stages. And the majority of the time there was a 50/50 rate of rejections against me rejecting the offer.â€

For Jabeen, the answers to questions she had left her disappointed, so she turned offers down. Some of the questions interviewers asked her, including invasive ones about her childcare responsibilities, also resulted in rejections on her part.

â€œI rejected eight offers where I had put in my CV with a western name and when they offered the role under the western name, I rejected the offer and explained that my CV/application under my actual name wasnâ€™t even considered. Both applications were identical, just name changes,â€ she says. â€œIn the interview, I asked why and they denied any bias and accepted my rejections. There was one incident where the company identified bias and â€˜took action to rectify the discrepancyâ€™.

â€œBut 176 interviews later and I finally have the perfect role, so [Iâ€™m] happy with the combination of rejections.â€

Of course, thereâ€™s a way to be tactical about questioning your interviewers â€“ and Hira Ali, an author, career coach, and leadership trainer, advocates doing it in a strategic way.

â€œA relevant and appropriate number of questions may be three to five, which indicates genuine interest and natural curiosity,â€ explains Ali. â€œAsking questions also shows that you have done your research and that you have knowledge of the role and the industryâ€•itâ€™s also another opportunity to demonstrate your confidence and highlight your knowledge and experience. Finally, the right questions can help you decide whether this company is aligned with your goals and aspirations or not.â€

To gauge compatibility, asking certain questions will also be beneficial, especially if youâ€™re an ethnic minority trying to understand the companyâ€™s diversity.

Ali adds: â€œI would definitely recommend asking about the teamâ€™s diversity composition and what measures they have in place to ensure that people from minority backgrounds are given ample opportunities to thrive and reach the top. And if itâ€™s not satisfactory, ask for the challenges they are currently facing in implementing it and how they aim to address it. Honesty and transparency is always preferable over half-hearted cover-ups lacking authenticity.

â€œThe interview is also a key opportunity to find out how you can turn your diversity into a competitive advantage and leverage your uniqueness. Itâ€™s also useful to throw in questions about your potential career trajectory if you are selected and what are the key qualities or deliverables of the most successful people at the company.â€œ

As a minority in the workplace, Black, Asian and other groups may feel alienated from the rest of the team, affecting their self-confidence.

â€œPeople from marginalised backgrounds often shy away from advocating for themselves, expressing their talents, and showcasing their achievements in case they are labelled as â€˜braggartsâ€™ or as â€˜trying too hard,â€™â€ explains Ali.

â€œThey are not only hesitant to put themselves forward, but also show reluctance in raising complaints, or voicing concerns for fear of being judged ill-favourably. They may feel as if asking too many questions will make them appear incompetent or ignorant or even difficult.â€

Ali says that many people she has coached from minority backgrounds are afraid of putting their vulnerability out in the open. The idea of exposing how they really feel or think or opening themselves up can seem â€œdangerous and riskyâ€.

â€œBecause the latter are reluctant to speak their mind, they are often viewed as lacking self-confidence,â€ she adds. â€œHowever, in any interview, itâ€™s crucial to show your worth and defy these internal barriers. Itâ€™s only people who carry themselves with confidence and who clearly vocalise their asks that typically get noticed more.

â€œResearch reveals that recruiters show clear preference for people who are confident and display powerful posing despite being unaware of the intervieweeâ€™s background, hypothesis and conditions.â€

So come with confidence, and ask everything you intend to â€“ it might help you make up your decision when you finally land that offer.

*Name has been changed to provide anonymity.