Will the Era of Butts Ever End? 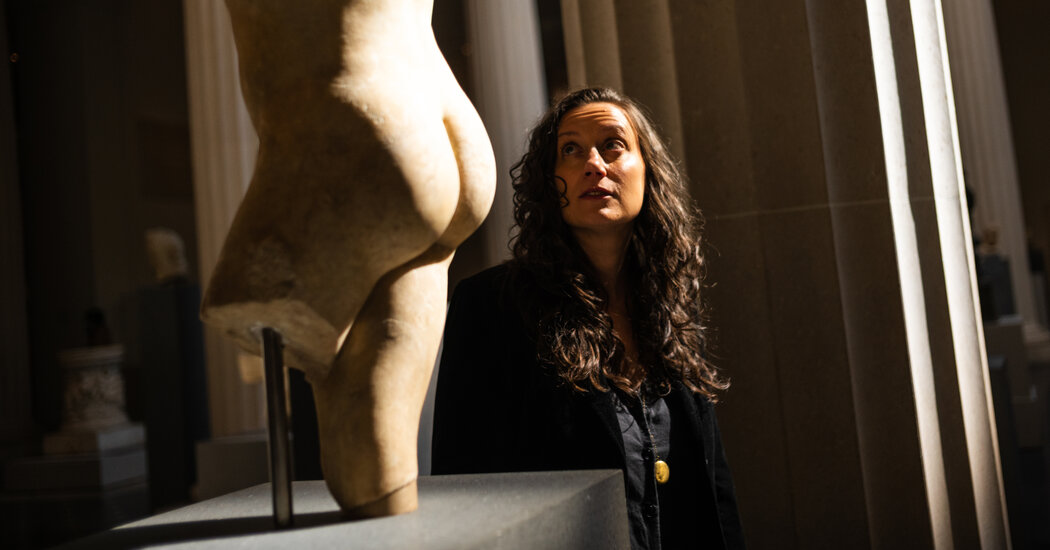 From the title of Heather Radke’s new book “Butts: A Backstory,” and its cover image of a ripe, callipygian peach, one might expect a book of provocative photos, or perhaps a chronicle of a personal fetish. But “Butts” is in fact a carefully researched and reported work of cultural history.

The blunt word choice for the title was intentional.

“You feel the sanitization in a word like ‘buttocks’,” said Ms. Radke, who has long, wavy dark hair and, on a Friday in October, was wearing a black linen jumpsuit and a black velvet blazer with Chelsea boots and blue socks.

She looked like a cool Brooklyn mom, which she is. Ms. Radke, 39, had a baby over the summer, and this was one of her first times venturing out without her child since giving birth. She had come to the Metropolitan Museum of Art in search of butts.

Ms. Radke walked from the Great Hall through the wings of Greek and Roman art. She almost immediately spotted a marble female figure from 4500 B.C. that resembled the voluptuous figure of the famed Venus of Willendorf. “We think of them as fertility sculptures, but we don’t really know — it’s tempting to see these things and use our contemporary lens about what they mean,” she said.

The book, which will be published by Avid Reader Press on Tuesday, makes the case that rear ends can tell us a lot about society. “Talking about women’s butts,” she writes, “has, for at least two centuries, been a way to talk about, and around, questions of race, gender, and what bodies mean.”

Ms. Radke catalogs freak shows in 19th-century London, visits natural history museums in Paris and attends drag performances in the Astoria neighborhood of Queens. She writes about the importance of famous derrières on stars of the past and present, such as Josephine Baker or Jennifer Lopez, arguing that the shape of their behinds influenced what men desired and what women aspired to. She also makes the case that the fascination with those women’s shapes reflected the changing demographics and culture of 1920s Paris and 1990s America.

Ms. Radke also profiles lesser-known but still important figures in the world of butts, like Lindsay Wagner, the most in-demand fit model for denim in the garment industry, and Greg Smithey, who created the “Buns of Steel” workouts in the 1980s.

Ms. Radke, who is a contributing editor at Radiolab, got the idea for the book in 2015, when she was in a nonfiction M.F.A. program at Columbia University, writing an essay on posteriors for a class taught by the writer Hilton Als.

As Ms. Radke went deeper into her research, she realized how vast the topic was. “The reaction I get a lot is, can you really write a whole book on that?” she said. “It feels like it’s not worth taking seriously, which suggests there’s something there worth exploring.”

Rear ends — larger ones in particular — have been a fixation in contemporary culture for more than a decade. Ms. Radke pinpoints 2014 as the peak of the mainstream media’s obsession, thanks to phenomena like “belfies” (a.k.a. butt selfies) and Nicki Minaj’s song “Anaconda.” The moment nonetheless persists, thanks to the enduring popularity of twerking, Brazilian butt lifts (or Brazilian Bum Bum Cream for those who don’t want to risk it, or can’t afford one), and the endless fascination with the changing sizes of the Kardashian-Jenner clan’s bottoms.

Ms. Radke stopped at a Hellenistic male sculpture that looked like something from the opening credits of “Call Me By Your Name.”

“For Greek or ancient people,” she said, “a good butt was associated with men.”

She largely grounds “Butts: A Backstory” in the female experience, however, including her own, and that of her mother, whom she interviewed. She writes of her mom’s “ample butt that filled out any pair of pants.” Her mother was ashamed of it, and as Ms. Radke became an adolescent, she wasn’t fond of her own either.

Ms. Radke, who is white, acknowledged that the cultural norms for rear ends varied by race and ethnicity and that the expectations around butts were fraught for different reasons. She was aware of her own limitations — “I only have the body and experience I have,” she said — so she sought input from many readers on the manuscript.

She also interviewed with women and nonbinary people from different backgrounds about their feelings about their own butts.

“I spoke to women who loved their butts, and those who hated their butts, but one of the things I heard most often was how hard it is to find pants that fit, no matter what kind of body a person has,” she said.

And she dealt with race head on in her research.

“Eugenicists were obsessed with ordering bodies, and so I figured they probably had something to say about women’s butts,” she said.

This led her to Norma and Normman, two white marble statues created by a scientist and a gynecologist in the 1940s, “physical manifestations of what eugenicists thought the people of America should aspire to be,” she writes. Norma’s measurements were culled from a data set that was taken only from white women.

After the Greeks and Romans, Ms. Radke headed for the European paintings galleries, in search of 19th-century art.

One of the main narrative threads of Ms. Radke’s book is the brief and brutal life of Sarah Baartman, the so-called Hottentot Venus, a woman from the Khoikhoi tribe in rural southwestern Africa who was born in the 1770s, captured by the Dutch at age 10, and later sold to a free Black man in Cape Town. She was forced to perform for sailors, showing off her pronounced butt, and was eventually taken to England and then France and exhibited as part of a freak show and in cartoons until her death in 1815, at just 26. Ms. Baartman’s figure implied a kind of racialized hypersexuality to 19th-century gawkers.

Ms. Radke walked briskly to the pointillist painter Georges Seurat’s most famous work, “A Sunday Afternoon on the Island of La Grande Jatte,” from the late 1880s. It prominently features a white woman standing in silhouette, with a bustle. In her book, Ms. Radke explores whether the popularity of the bustle in 19th-century women’s garments could have had something to do with the influence of Ms. Baartman. “It was a way for a Victorian woman to make her butt look like Sarah Baartman’s,” Ms. Radke said.

On her way past the American Wing, she stopped at an exhibit called “Kimono Style.” Ms. Radke pointed to a dress inspired by the kimono’s shape from the French couturier Madeleine Vionnet from 1917. That was when the bustle was coming out of fashion, “but there was another form of constraint starting in the ’20s — a much larger emphasis on diet and weight,” Ms. Radke said, and a slender figure.

The ideal size for a bottom is always changing, Ms. Radke pointed out, adding that the thinner frames of Kim Kardashian and other celebrities right now may foretell a return to a smaller butt in fashion.

She walked past Henri de Toulouse-Lautrec’s paintings of late 19th-century sex workers and his naturalistic renderings of their butts and thighs. She read aloud the description: “Lautrec does not flatter a woman’s naked figure.” She interjected her own commentary: “Way harsh!”