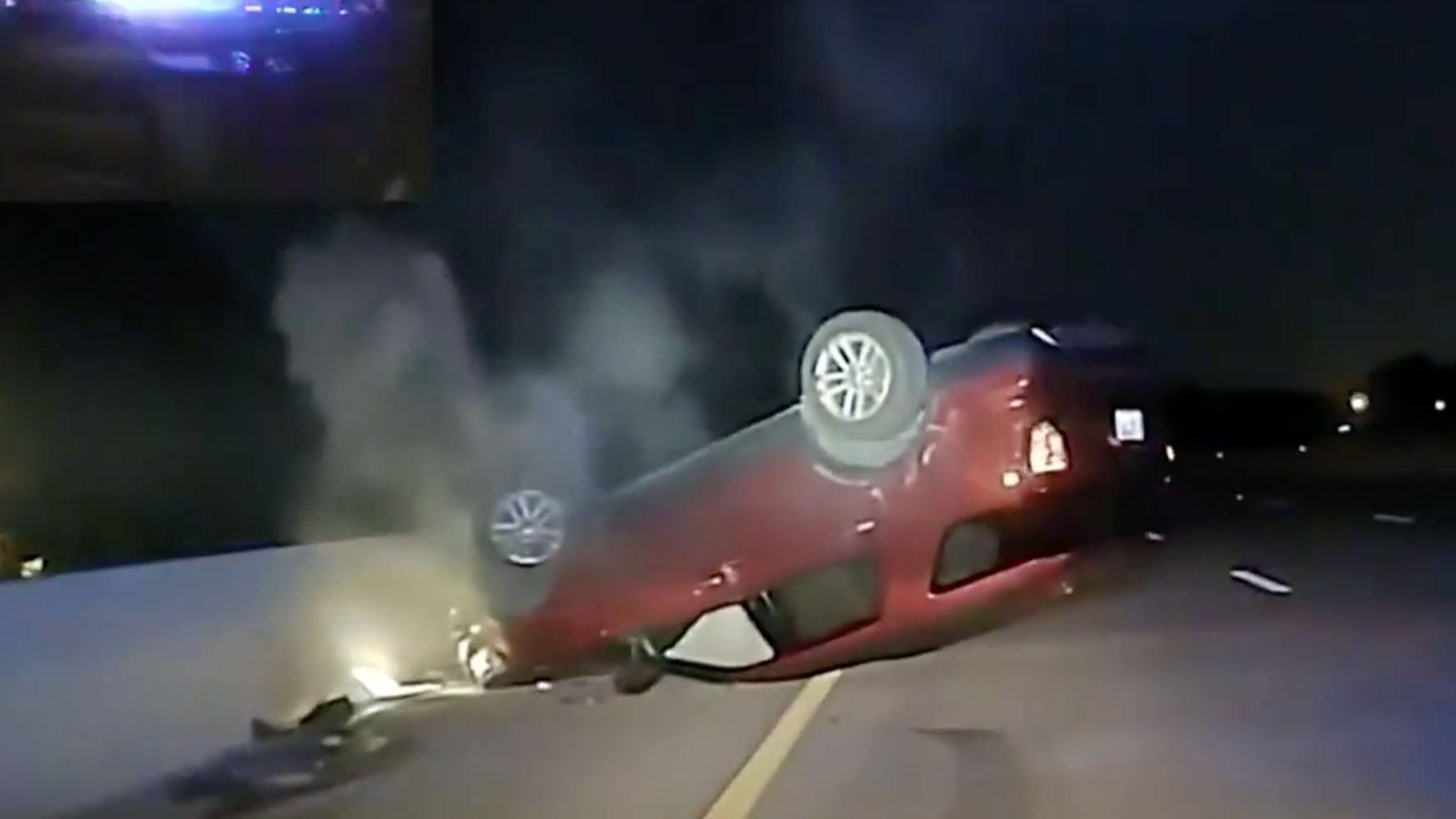 AnÂ ArkansasÂ state trooper flipped a pregnant womanâ€™s car on the highway last year while, the woman says, she was looking for a safe place to pull over. Now sheâ€™s suing the officer, Senior Cpl. Rodney Dunn, accusing him of negligently using deadly force.

Dashcam video released this week shows the 38-year-old woman, Nicole Harper, driving down a stretch of Highway 67/167 in July 2020. She was allegedly doing 84 mph in a 70 mph zone.

Dunn turns on his lights and siren and pursues Harper, who immediately slows down, pulls into the right lane and turns on her hazard lights.

According to the lawsuit, narrow shoulders on that stretch of highway prevented Harper from pulling all the way over, so she continued driving in the right lane at 60 mph with her hazards on.

Roughly two minutes later, Dunn executed whatâ€™s known as a â€œprecision immobilization techniqueâ€ against Harperâ€™s vehicle, intentionally causing it to lose control. In the clip, you can see Harperâ€™s SUV swerve left, toward the concrete highway median. Within seconds, the car is upside down.

A cop flipped over a pregnant woman’s car because she didn’t pull over quick enough.

Not only is what she did not wrong, it’s what you’re supposed to do: turning on hazards to indicate you’re complying and pulling over at the next safe place to do so…

This man is still a cop. pic.twitter.com/kvNEeEmdf6

Dunn approaches the flipped car. As he helps Harper out of the vehicle, he asks: â€œWhy didnâ€™t you stop?â€

â€œBecause I didnâ€™t feel like it was safe,â€ Harper answers. Dunn responds: â€œWell, this is where you ended up.â€

â€œI thought it would be safe to wait until the exit,â€ Harper replies, to which Dunn says: â€œNo maâ€™am, you pull over when law enforcement stops you.â€

Harper later says: â€œI did slow down, I turned on my hazards. I thought I was doing the right thing.â€

In the Arkansas State Policeâ€™s Driver License Study Guide, the first item for â€œwhat to do when you are stopped by a law enforcement officerâ€ is: â€œPull over to the right side of the road â€• activate your turn signal or emergency flashers to indicate to the officer that you are seeking a safe place to stop.â€

Harper, who was pregnant at the time of the crash, told Fox 16 she thought she would lose the baby because of it. Thankfully, her unborn daughter was unharmed.

In a statement to KARK,Â Arkansas State Police Director Col. Bill Bryant didnâ€™t comment on the specifics of the case, but did defend the use of PIT maneuvers in general as an important tool to stop drivers who try to flee.

â€œOver the past five years, Arkansas State Troopers have documented a 52% increase in incidents of drivers making a conscious choice to ignore traffic stops initiated by the troopers,â€ Bryant said. â€œThe fleeing drivers pull away at a high rate of speed, wildly driving, dangerously passing other vehicles, showing no regard for the safety of other motorists, creating an imminent threat to the public.â€