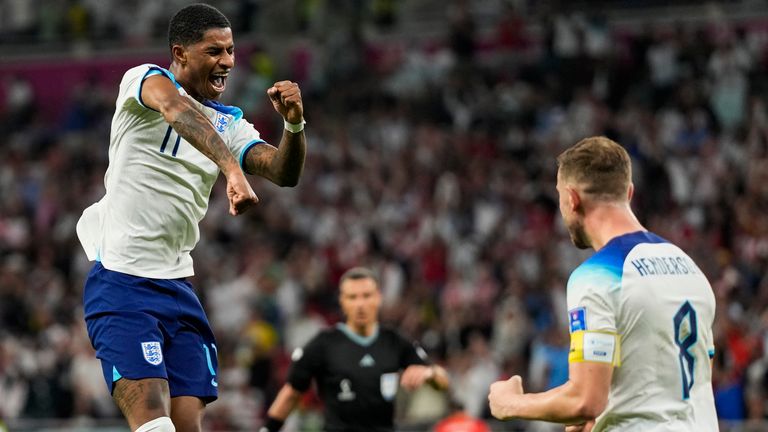 Marcus Rashford and Phil Foden capitalised on their starting roles to help England eliminate Wales from the World Cup with a 3-0 win that also secured top spot in Group B and set up a last-16 tie with Senegal.

England boss Gareth Southgate had been grilled since the disappointing goalless draw with USA about Foden’s lack of game time in the tournament so far and the Manchester City forward showed what he can bring to this stage at the start of the second half, winning a free-kick, which was brilliantly converted by Rashford (50), before tucking in at the back post (51) moments later to put his country on course for an ultimately comfortable win in the first all-British World Cup finals clash.

Rashford had already scored in the opening game thrashing of Iran and underlined his own fine form with his excellent second (68), picking up a ball over the top from sub Kalvin Phillips before cutting inside his marker and firing through the legs of Danny Ward. He had the Wales goalkeeper scrambling at his near post soon after as he searched for a hat-trick and now looks like a certain starter in the next round.

Wales, who needed a win and a helpful result in the other group game to continue their first World Cup adventure since 1958, did well to limit their opponents in the first half but never really threatened to spring the upset required. Their first shot came in first-half stoppage time and only a deflected long-range effort from Kieffer Moore made Jordan Pickford work in the England goal.

Gareth Bale managed just seven touches in that opening 45 minutes and was forced off injured at the break in what may prove to have been his final major tournament appearance for his country. His next step will be a key talking point as Wales reflect on their impressive achievement to reach Qatar but bottom-place finish in the group and a first major tournament in which they have failed to win a match.

For England, though, the knockout phase awaits, and Southgate will be encouraged by his side’s strength in depth, with Kyle Walker and Phillips gaining vital minutes on their returns from injury, and Foden and Rashford illustrating the array of attacking options at his disposal.

England’s win has set up a last-16 tie with Senegal on Sunday December 4, kick off 7pm.

Wales’ defeat, coupled with USA’s win over Iran, means they finish their campaign bottom of Group B with one point from their three games.