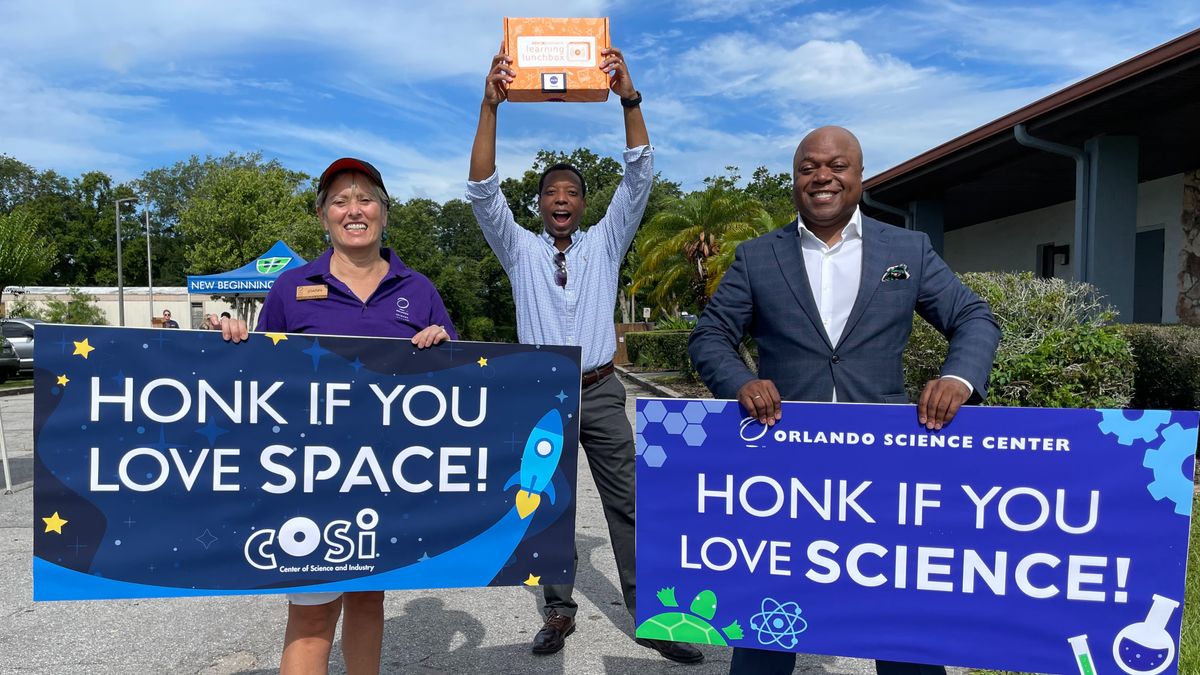 A portable science kit launched during the early pandemic is rapidly expanding distribution from a single Ohio county to London, Paris and Dubai.

NASA, the Office of Vice-President Kamala Harris, and government entities around the country are funding “Learning Lunchboxes”, first imagined by an Ohio science museum just two years ago as they were seeking to help their community. One of the latest funding surges came from OVP in September in support of World Space Week.

“The most important thing that we do is give people a hands-on experience,” said Frederic Bertley, president and CEO of Columbus’ Center of Science and Industry (COSI), which seeks to serve students from elementary to high school with interactive activities.

Given the museum shut down for pandemic-related safety reasons for much of 2020, officials came to realize that “we can’t have COSI come to people,” said Bertley. “Instead, we’re going to put COSI in a box.”

Related: The best space gifts and deals for kids 2022

The pandemic induced particular pressure on communities like Columbus, where nearly 20% of the population lives in poverty and roughly half self-identify as a minority (such as Black, Asian or Latino), according to U.S. Census Bureau statistics (opens in new tab) from 2020-21.

Falling employment, soaring health care costs, the growing health risks of working ‘front-line’ jobs and other complications created intersectional problems for the community. To tackle these, COSI and its partners took a creative approach.

“Our very first partnership was with food pantries, because the two major things that underserved populations had was food insecurity and an education crisis,” Bertley said, specifically pointing to families that had no internet access or ways to access remote learning during school shutdowns.

The program’s debut came when COSI delivered 500 Learning Lunchboxes a week to local food pantries to target “underserved” zip codes in the Columbus area. It was in light of that food-and-fuel approach that the program found its tagline: “Feeding hungry lives and hungry minds.”

Related: NASA, ESA experts weigh in on diversity and inclusion in space

Each kit includes a package with a particular theme tied to science curriculum standards – including space (opens in new tab). (While the kit-and-lunch deal are rapidly expanding for free to U.S. communities that need them, a version is also available for purchase online (opens in new tab) for families or educational institutions that can afford it.)

“This device has democratized access,” Bertley said of the kit, which (depending on the program) has been funded by public dollars at the local, state or federal level as distribution expands. Roughly 30 states have already signed on and COSI has aims to bring the kit across the country (and its territories) if it can.

On camera with Space.com, Bertley opened one of the space kits to demonstrate what is inside: an illustrated guidebook and a set of simple experiments, estimated ti contain around 10 hours of content for students.

QR codes pepper the guidebook to bring educators and older students to experiment instruction videos, if they have access to mobile devices. (One of the space videos is a conversation with Jill Tarter, the public face of the Search for Extraterrestrial Intelligence or SETI, on the prospect of alien life.)

There are also links in the guidebook to COSI’s two Emmy-award winning short series: YouTube’s “Dr. B in 3 (opens in new tab)” and PBS’ “QED with Dr. B (opens in new tab)“, covering topics ranging from climate, to immunity, to diversity.

The guidebook is available at different English language levels in order to meet the literacy needs of different students. An effort is ongoing to translate the instructions into different languages, like Arabic, Spanish and perhaps Korean.

Every facet of the design is meant to be inviting, from the easy-to-open flap to the way everything is laid at the top of the box, inviting kids to pick up what they can see. The team drew inspiration from Apple and other companies leading the “unboxing” trend in formulating the design.

“I know people keep their iPhone boxes. It’s just a beautiful thing,” Bertley said. “Think about that: Especially for the kiddos, you want them excited. You want them to have pride in their box.”

In the two years since local food pantries began distributing the box, the program quickly vaulted to several top-shelf deals across entertainment, science and politics.

Miss America 2020 (a.k.a. Camille Schrier of Virginia) is finishing a Ph.D. degree in pharmacology and advertised the lunchbox. Around the same time, the kit rapidly expanded to all 88 counties in Ohio and began migrating to Tennessee, Kentucky, Michigan and other states. (Florida was cinched through NASA, which now offers kit at the educational entities attached with all 10 of its U.S. research centers.)

It was through partnerships with U.S. federal departments that the kits really began to diversify, Bertley said. Examples include the U.S. Department of Energy supporting an energy-focused kit, the water kit getting a boost from the Ohio Department of Natural Resources, Honda supporting an engineering lunchbox, and Virgin funding a “Hyperloop” kit (referring to a high-speed tunnel service first speculated upon by SpaceX‘s Elon Musk.)

But the “coolest” kits, in Bertley’s mind, are the four space kits: three with NASA and one in partnership with Vice President Harris’ office, as Harris is the chair of the National Space Council. The quartet includes a “generic” kit with a launchable rocket, a kit concerning NASA’s Artemis moon program, a kit about the James Webb Space Telescope and one with a space-themed board game (opens in new tab) unveiled with the National Space Council.

Learning Lunchboxes are also starting to make an international debut, after COSI was invited by the U.S. State Department and NASA to be part of the closing ceremony of the 2021-2022 World Expo in Dubai, which in part prompted the Arabic translation effort. (COSI also landed in London on the way home to promote the Hyperloop kit, alongside Virgin.) Next stops after that included Paris, and a pilot program in Barbados.

Bertley emphasized the aim of the program is to have students gain confidence in numbers and other STEM (science, technology, engineering and math) skills, alongside reading and writing.

“My goal is to be part of the community and to try to get people to see that this is cool,” he said. “You become a scientist? That’s not the point. [The point is] you’ll be better off by having some understanding of how the natural universe works.”