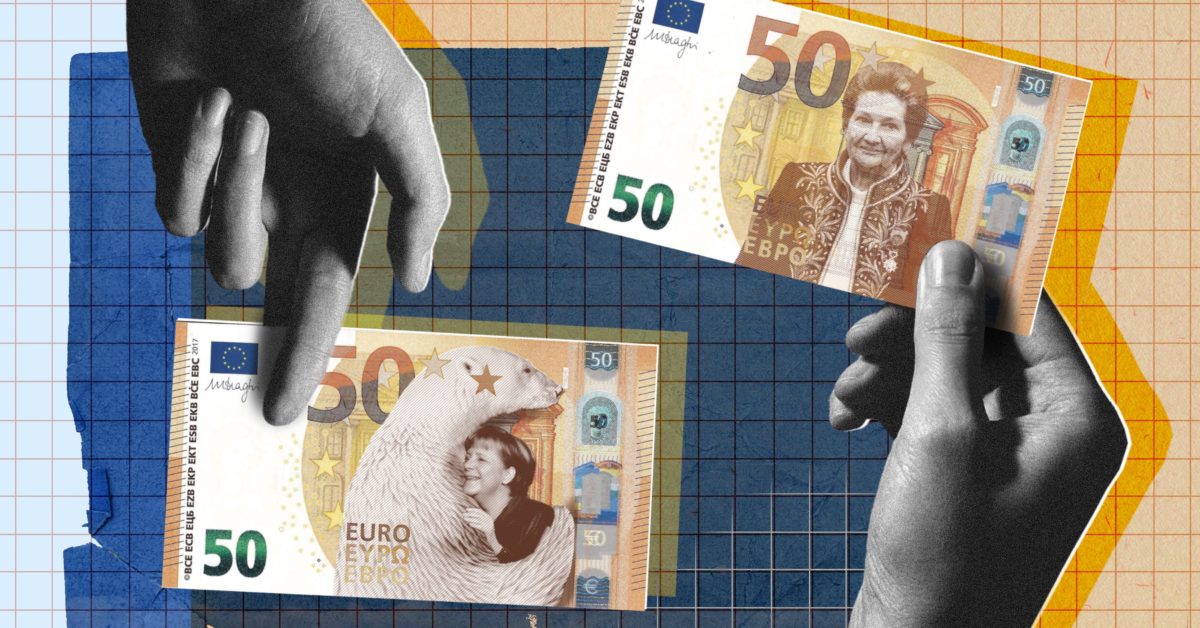 We all have different visions of the European Union but how to sum up the bloc in one image is difficult â€¦ maybe itâ€™s a great and powerful politician, a symbolic monument, a life-changing invention?

Nah, itâ€™s EU founding father Robert Schuman wielding a magic sword while riding a unicorn, with both rider and beast in matching onesies emblazoned with the EU flag!

The above were some of the more outlandish suggestions received here at POLITICO Towers when we took to social media to ask who you thought should be on the new euro banknotes (and a big thanks to the many hundreds of you who got in touch).

The European Central Bank this month announced that it plans to redesign the notes and let citizens have a say in who or what should be featured on them. The design of euro banknotes is a politically sensitive issue, of course. Typical banknote images â€” famous poets, composers or buildings, say â€” run the risk that one member state or another feels underrepresented or slighted. At present, banknote designs are based on an â€œages and stylesâ€ theme, represented by windows, doorways and bridges.

The ECB is taking a slight risk here. Opening up voting to the public can be a tricky business and doesnâ€™t always produce the results the organizers wanted. It was just a few years ago that the U.K. was rocked by a vote in which the people went in a direction that few in the political classes thought possible â€” no, not Brexit, but Boaty McBoatface!

Asked to name a new polar research ship, the British public overwhelmingly voted in favor of Boaty McBoatface. Alas, the ship was actually named Sir David Attenborough, although to avoid being dubbed humorless, the name Boaty McBoatface was given to a small, autonomous underwater vehicle that forms part of the shipâ€™s research equipment.

There was no Notey McNoteface in the suggestions to our poll, many of which were eminently sensible. Top of the list of people suggested was Simone Veil, the first woman to hold the post of European Parliament president. Second was Marie Curie and third was Robert Schuman (mostly without his unicorn and onesie). Rounding out the Top 5 were Charlemagne and Jean Monnet. There were also plenty of people who wanted to see notes featuring Albert Einstein and also Angela Merkel (mostly without the polar bear) and Mario Draghi (one person wanted his famous â€œwhatever it takesâ€ line on there as well).

A few bright sparks even suggested British prime ministers, with Boris Johnson, David Cameron and Winston Churchill all being mentioned. One person went for Charles Michel. (Sadly the anonymous nature of the poll doesnâ€™t allow us to check if that came from an office in the Justus Lipsius building. Damn you, GDPR!!)

Also getting votes were Eurovision acts Conchita Wurst and Dustin the Turkey, Homer (Greek author or Simpson not specified), ex-Bulgarian Prime Minister Boyko Borissov (with a gun and wads of cash), Hermaphroditus (with a phone) and actor â€” and non-European â€” Danny DeVito (mind you, he was very good in â€œOne Flew Over The Cuckooâ€™sÂ Nestâ€).

For those who didnâ€™t want to see a person on the new notes, there were plenty of votes for both the general â€”Â bridges, monuments, animals â€” and specific â€” the Eiffel Tower, the Danube Express train. A couple of people even suggested that redesigning the notes was a waste of time and money as weâ€™ll all be using cryptocurrency soon anyway.

Of course, the best suggestion (and the one the ECB should pick) was simply â€œpuppies (and a dog emoji).â€