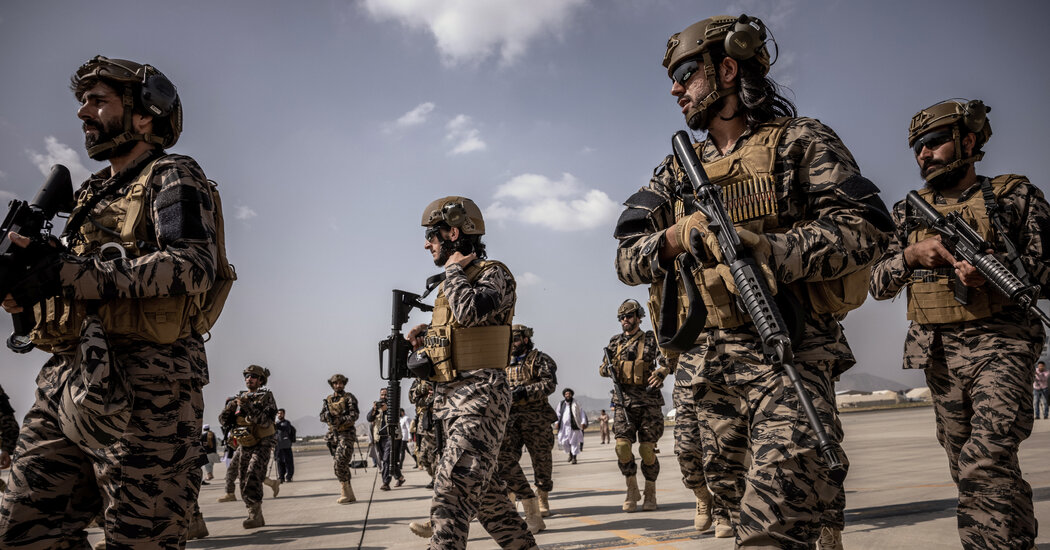 We’re covering President Biden’s address on the end of the U.S. war in Afghanistan and India’s latest G.D.P. numbers.

A day after the final transport plane carrying American forces left the Kabul airport, President Biden hailed what he called the “extraordinary success” of the evacuation as he strongly defended his decision to end the U.S. war in Afghanistan.

Speaking from the White House, Biden blamed former President Donald Trump for negotiating a withdrawal deal with the Taliban that boxed Biden and his team in.

“That was the choice, the real choice between leaving or escalating,” Biden declared. “I was not going to extend this forever war.”

“I believe this is the right decision, a wise decision, and the best decision for America,” he said.

Hours earlier, from the tarmac at the Kabul airport, the Taliban’s spokesman declared victory in their two-decade fight against U.S. occupation.

Zabihullah Mujahid, the spokesman, congratulated Afghans as he toured the airport. “This victory belongs to us all,” he said.

But for many Afghans, the moment did not feel anything like a victory. They are grappling with food and cash shortages, terrorist threats and a humanitarian crisis. And they fear that repressive tactics the Taliban have used will be back in full force.

Travel: The Taliban have promised that people with passports and visas would be allowed to leave the country, regardless of their roles during the U.S. occupation. The airport was set to reopen within days.

A vaccination milestone in the E.U.

About 70 percent of adults in the European Union have been fully vaccinated against Covid-19, officials said on Tuesday. The bloc is now among the world’s leaders in vaccinations despite a sluggish start earlier this year.

Taking children and teenagers into account, more than 55 percent of the overall E.U. population has been fully vaccinated, compared with 52 percent in the U.S., 61 percent in Israel and 64 percent in Britain.

But there are wide differences among the 27 countries of the E.U. Some are requiring vaccination passes for access to restaurants or cultural venues, driving up vaccine rates, but parts of Eastern Europe are struggling because of misinformation and other problems.

Gaps: More than 80 percent of adults have been fully vaccinated in Belgium, Denmark and Portugal, and more than 75 percent in Spain and the Netherlands. The figure falls to 45 percent in Latvia, 31 percent in Romania and 20 percent in Bulgaria.

Quotable: “The pandemic is not over,” Ursula von der Leyen, the president of the European Commission, warned. “We need more. I call on everyone who can to get vaccinated.”

Here are the latest updates and maps of the pandemic.

India’s economy was battered by Covid

Economists predict that growth in India could surge in the second half of the year, on paper. Still, the damage from the pandemic could take years to undo.

Economic output was 9.2 percent lower for the April-through-June period this year than what it was for the same period in 2019, before the pandemic struck, according to India Ratings, a credit ratings agency. Since then, millions of people have lost their jobs.

This year has seen improvements from last year’s shutdowns: The gross domestic product rose by 20 percent April through June, according to government estimates released late Tuesday.

But economists are particularly concerned about the slow rate of vaccinations and the possibility of a third virus wave, which could be disastrous for any economic recovery.

Analysis: The coronavirus has essentially robbed India of much of the momentum it needed to provide jobs for its young and fast-growing work force. Pressure is growing on Prime Minister Narendra Modi to get the country back to work.

A century after museum curators collected more than 800 varied birds from Colombia, a team of researchers has made a similar expedition to see what remains, and what has changed. Studies of species from the same place over long periods of time are rare in science, and the project will shed light on how tropical birds have responded to changes in the climate.

Throughout her career, Aretha Franklin remained fairly unknowable to the public. “I didn’t make a dent in her armor,” David Ritz, a biographer, once lamented.

Because of this privacy, it’s tough for onscreen portrayals of Franklin to fully capture the artist. The most recent attempt — the film “Respect,” starring Jennifer Hudson — sticks “too closely to Franklin’s own self-image, a narrative that she tightly controlled,” Salamishah Tillet writes in The Times.

The Sydney Pollack documentary “Amazing Grace,” on the other hand, would not have made it to screens if it were up to Franklin, who repeatedly sued to block its release. Filmed in 1972 over two nights in a Los Angeles Baptist church, the movie was released after Franklin’s death. The film, Tillet writes, is “all gospel, a cinematic capturing of spiritual ecstasy and religious exaltation, and a Franklin who surrenders her voice to God, and is at her most sublime.”