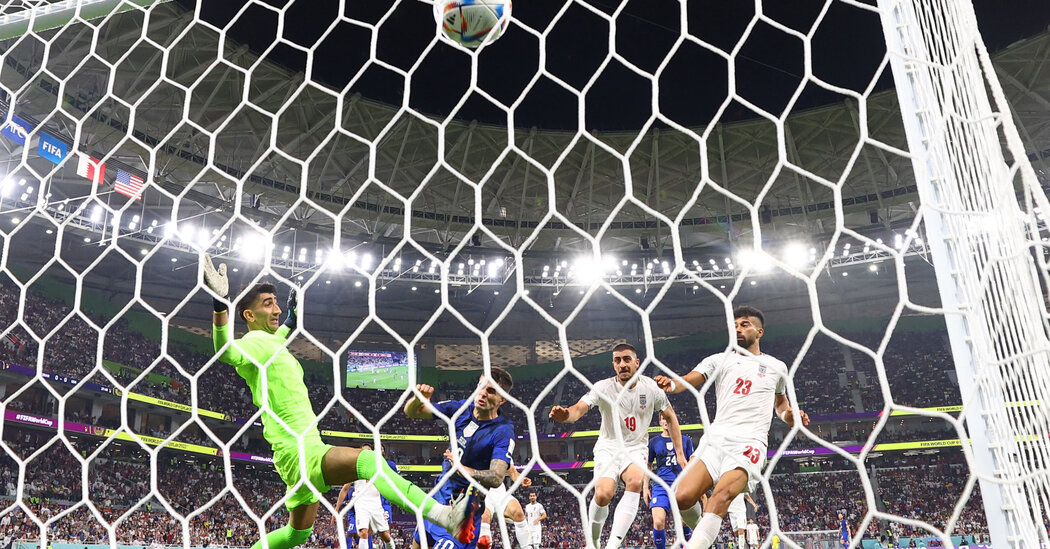 Victory for the U.S.

The U.S. beat Iran, 1-0. In so doing, the team avoided elimination and moved through to the next round in second place for Group B. England coasted past Wales, 3-0, and moves forward. Iran and Wales were eliminated.

The U.S. scored its goal in the first half and kept the momentum up through the end. Christian Pulisic scored the only goal, but then crashed into Iran’s goalkeeper and left the game with an abdominal injury. At 24, Pulisic is the young team’s brightest star.

Iran’s loss may also mean that less attention will be paid to the fans who have used the World Cup to shine a spotlight on anti-government protests in the country. Fans have worn shirts bearing the word “Freedom” and the name of Mahsa Amini, whose death in custody set off protests across Iran. They booed the national anthem and waved flags with a protest slogan — “Woman, life, freedom” — only to be escorted out.

What’s next: The U.S. will face the Netherlands on Saturday, and England will play Senegal on Sunday. Here are photos of fans.

China cracks down on protests

Communist Party officials are using decades-old tactics, along with some new ones, to quash China’s most widespread protests in decades.

Public security personnel and vehicles have blanketed potential protest sites. Police officers are searching some residents’ phones for prohibited apps. Officials are going to the homes of would-be protesters to warn them against illegal activities and are taking some away for questioning. And censors are scrubbing social media.

Xi Jinping is staying silent, intent on projecting business as usual. Yesterday, the People’s Daily featured his talks with the visiting Mongolian president and a front-page celebration of Xi’s decade in power, but did not mention the protests, China’s most widespread since the Tiananmen Square pro-democracy movement of 1989.

Analysis: Xi appears to be wagering that he can sap the protests’ momentum while the security services move in. After the swell of public dissent over tight Covid controls this weekend, recent public gatherings have been smaller.

Vaccines: China’s case numbers are high, but only 40 percent of those 80 or older have had booster shots. Officials said they would go door to door with vaccines and press those who are reluctant to give a reason.

Voices: Protesters are reacting to months of economic hardship, which has also upended global forecasts. Some young people said they had reached a “tipping point.”

The U.S. is giving Ukraine $53 million for equipment to repair its battered electricity grid after weeks of Russian aerial strikes. And NATO’s secretary general, Jens Stoltenberg, reaffirmed its longstanding commitment that Ukraine would one day join the alliance.

Antony Blinken, the U.S. secretary of state, made the aid pledge yesterday on the sidelines of a two-day conclave of NATO foreign ministers. The aid is in addition to the $55 million in energy sector support that the U.S. has already promised Ukraine.

A senior official said the U.S. hopes the aid will also spur more donations from other nations, as a harsh winter looms. The Americans are aiming to assemble a working group to help Ukraine protect and repair its infrastructure as Russian strikes deprive millions of residents of power and water.

Allies: NATO countries have so far provided some $40 billion in weaponry to Ukraine, about the size of France’s annual defense budget. Over the weekend, the E.U. announced that it was preparing to deliver 200 transformers and 40 heavy generators.

Economy: The war has become the greatest economic challenge of President Biden’s tenure.

Deaths: Villagers near Kherson unearthed the bodies of six men, who appear to have been killed execution-style, evidence of possible Russian war crimes.

A popular museum in Paris has 18,000 skulls, which are hidden in the basement. It has never publicly identified the remains, which could open the door to sensitive restitution claims.

Now, my colleague Constant Méheut obtained documents detailing their identities. Some were African tribal chiefs. Others were Cambodian rebels and Indigenous people from Oceania, a stark reminder of France’s colonial past.

“I discovered the existence of these skulls while reporting a previous story on the muddled return of 19th-century Algerian skulls,” Constant told me. “These remains, I realized, were only the tip of the iceberg.”

Where is Isabel dos Santos?

Angolan authorities have asked Interpol for help to track down Isabel dos Santos, the daughter of Angola’s former president, who was once considered Africa’s richest woman. The effort to arrest her comes after years of investigations into the enormous fortune she amassed while her father, José Eduardo dos Santos, who died in July, held office.

The authorities have said they plan to charge her with economic crimes linked to her tenure as the head of the state-owned oil company. With a worth once estimated at $3.5 billion, dos Santos became the face of corruption in Angola after her father stepped down.

Angolan authorities say letters sent to her homes in the Netherlands, the U.K. and the United Arab Emirates have all gone unanswered.

“My address is known, my whereabouts are known,” dos Santos told The Times this month. She labeled the investigation “political persecution” and accused the Angolan courts of bias.

“I’m not a fugitive. I’m not hiding from anyone,” said dos Santos, who regularly posts on Instagram. Many of her assets across the world, including in Portugal and the Netherlands, have been frozen because of the corruption accusations hanging over her. Forbes has estimated that she is no longer a billionaire. — Lynsey Chutel, Briefings writer in Johannesburg